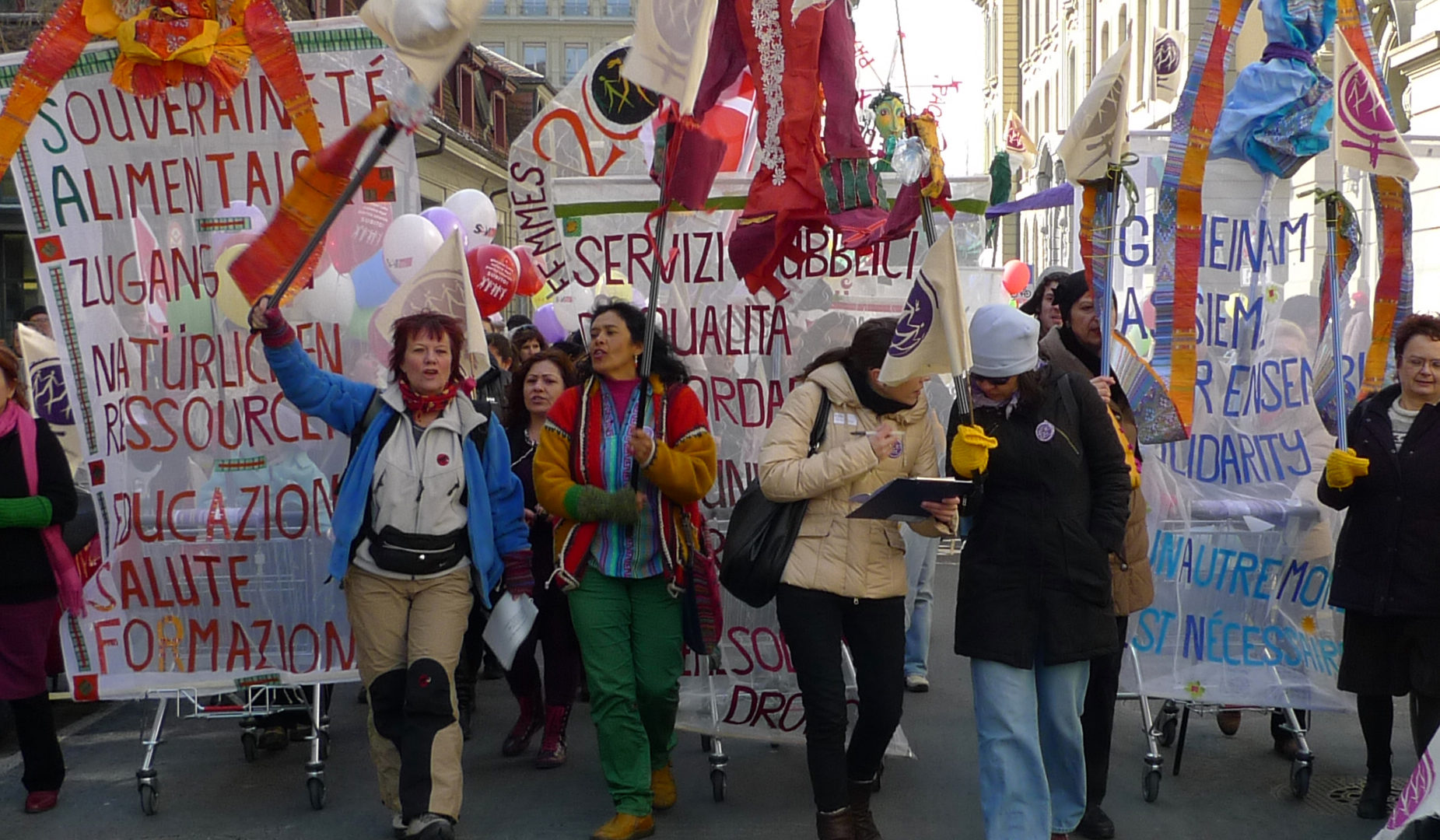 Violence against women is structural – it is an inherent feature of the patriarchal and capitalist systems – and is used as a tool of control of the lives, bodies and sexuality of women by individual men, groups of men, patriarchal institutions and States. Although it affects all women as a social group, each violent act has a specific context, and we have to understand how, when, and why violence against women occurs.

The general belief about violence against women is that it is an extreme or isolated situation involving individual people. Whereas, on the contrary, it affects us all because we all have experienced fear, changed our behaviour, and limited our options due to the threat of violence. Another common idea is that violence against women is a problem limited to low social classes and to “barbarian” cultures, but we know that this kind of violence is transversal, that it cuts across all social classes, cultures, religions, and geopolitical situations.

Although violence against women and girls is more common in the private sphere – as domestic violence, be it sexual, physical, psychological or sexual abuse – it also occurs in the public sphere, including (but not limited to): feminicide, sexual and psychological harassment in the workplace, different forms of rape, the commodification of women’s bodies, trafficking of women and children, prostitution, pornography, slavery, forced sterilisation, lesbophobia, denial of safe abortion and reproductive options and self-determination, etc. Silence, discrimination, impunity, women’s dependence on men, and theoretical and psychological arguments tolerate and aggravate violence against women.

Violence, or the threat or fear of violence, is used as a way of excluding women from the public sphere. Women pay with their lives for working outside the home instead of staying within the private sphere as dictated by patriarchal culture, for going to school or university, for ‘daring’ to live their sexuality openly, for prostituting themselves for lack of options. In the context of criminalisation of social movements and of protest, repression against women activists engaged in the struggle often takes the form of sexual violence. Furthermore, discrimination against women is compounded by the intersection of different modes of oppression: they are discriminated against for being women, but also because of their skin colour, language, race, ethnicity, class (and financial situation), religion, sexuality…

Violence against women is rooted in the patriarchal system and in capitalism, which impose the need to control, to own, and to exploit women’s bodies, lives and sexuality. Patriarchy is based on two principles: women belong to men (and for this reason, women are in the service of men and can never say “no” to them), and the division of women into categories: “saints” and “sinners”. As part of this system, violence is the punishment for women who do not fit the role of “saints” – of good mothers and wives. For example, it is common for men to justify verbally or physically attacking their wives because the food was not ready or the clothes they wanted to wear were not clean. It is also punishment for those who are considered “sinners”, with both aggressors and societies justifying sexual violence against women on the basis that ‘they were out alone at night’, or ‘they are lesbians and need to be taught to be heterosexual’, or ‘the clothing they were wearing was indecent’.

As part of the patriarchal culture, masculinity is associated with aggressiveness, and young men are taught that to be violent (and not to show emotions) is to be a ‘real man’, leading – in some cases – to them joining racist and sexist gangs. New forms of violence against young women, such as sexual harassment against female students and group violence in schools, are becoming more common and more visible each day. These forms of violence form the basis of sexist relationships and roles between young women and men, without any kind of public discussion around these devastating stereotypes.

The idea imposed by patriarchy – of women as the property of men – includes an economic aspect that is expressed in the union of patriarchy with capitalism, imposing a sexual division of labour with ‘natural’ roles for women and men. In this way women are regarded as free labour in the reproductive sphere, always available for the care of others and all the work this entails. There are therefore two levels of women’s domination within the patriarchal and capitalist systems: on the one hand, women’s labour is exploited, and on the other, violence is used to maintain their domination by men. And therefore we cannot talk about the eradication of violence against women without calling for the eradication of the patriarchal, capitalist, and colonial systems.

Violence against women and misogyny intensify as the policies and actors of neoliberal globalisation entrench their hold on the economy. Feminicide[1] increases as free-trade agreements in the Americas are promoted and set in place (such as North American Free Trade Agreement under which work spaces, such as factories, enjoy lax human resource and environmental regulations): huge numbers of Mexican women are killed, for example, when they try to cross the United States border and within the border town of Ciudad Juarez itself. The attack on reproductive rights and health services has been on the rise as social services are privatised or their budgets slashed. Younger and younger girls are trafficked as the sex industry is globalised. Women are raped in wars waged in the name of ‘spreading freedom’, and invasions are carried out by foreign powers (such as the invasion of Afghanistan by the USA) ‘justified’ by the defence of women’s rights.

How can we fight violence against women?

In many countries, there are laws and international conventions such as CEDAW (Convention on the Elimination of all forms of Discrimination against Women) that “protect” women, but they are not sufficient because they are often not enforced or put into practice. Moreover, these laws and conventions focus the issue of violence on women, as if it was our problem to deal with, whereas – on the contrary, and as we have seen above – we need to question men’s role in violence and denounce the fact that violence is structural.

We recognise that punitive measures against perpetrators are necessary, but not sufficient, to eradicate violence; in those countries where they do exist they rarely reach women who do not fall into the middle-class, urban, white category. We have to hold our States accountable, to demand public policies for violence survivors, for trafficked women and children, for minority groups (women of colour, of a certain religion, etc), rural, migrant and indigenous women. Actions are needed to prevent and inhibit acts of violence before they occur.

We also need to discuss the role of governments and States. Nowadays, the State is simultaneously protector and oppressor, at the same time bearer of general interests and defender of privileges, but it is also patriarchal and violent (against women, indigenous people, immigrants, people of colour[2]). Moreover, the very same police who enforce many of the policies we demand, are themselves perpetrators of violence against women, repressors of social movements, and are socially and racially biased. We recognise the contradiction inherent in this situation, because the fact is that for many women the only way they can defend themselves against violence in their communities and families is to rely on the State, which represents an external and superior power. On the contrary, the State that we demand is one that promotes freedoms and rights for all, intervenes in the economy, and is structured on diversified forms of participative democracy and control by its citizens.

Women have always resisted, and continue to resist, both individually and collectively. Whenever a woman acts in such a way that she defies or denounces violence against her or women in her community, she is breaking away from the dominant paradigm. We need to support her resistance by condemning and naming men who commit violence against women, and publicly confronting men and society on the issue of violence against women. We also need to denounce the complicity of men, the State and institutions such as the army and religions. We need to mobilise civil society, strategise, and promote radical actions for the prevention and denouncement of male violence against women. In this process, the women’s not-for-profit sector – that provides services that are essential to women’s healing and empowerment – and strong, local movements – in which community women are protagonists – play a decisive role.

We, women of the World March of Women, want to engage in broad political debates and actions that promote changes in our patriarchal cultures and anticipate the occurrence of violence, in this way being truly preventative. The extent and intensity of male violence against women is already well documented, therefore it is not necessary to wait for yet another denouncement. More vital is to get this issue on the agenda of women’s groups, mixed organisations, community radio programmes, newspapers, and other means of communication used by movements. In order for this to occur, we believe that the feminist movement should work towards the promotion of strong, wide-ranging self-organisation of women struggling for autonomy (economic, sexual, reproductive, personal, etc) and self-determination.

Women’s groups are strengthened through group conversations, debates, demonstrations, and corporal self-defence classes. The objective is not to situate sexual violence as the problem of only a few women, but to strengthen all women, learning and re-learning to resist and to build and re-build our lives without violence.

We value, as an important step in this struggle, the fact that mixed social movements – be they urban or rural – are committed to confronting male violence against women. To this end, we declare our solidarity with Via Campesina’s ‘World Campaign to end Violence against Women’ that was launched at their 5th International Conference held in Mozambique in October 2008. We acknowledge the importance of both women and men holding men accountable for violence against women.

In the fight against violence against women, we demand:

And we commit ourselves to:

Work in alliance with mixed social movements (in which men and women participate) in order to guarantee the construction of an environment in which violence against women is not acceptable (and physical spaces free from violence) as a guiding principle of these movements.

[1] The misogynist, exceptionally brutal genocide of women, often accompanied by extreme sexual violence and impunity for its perpetrators.

[3] The forced marriage of a widow to her brother-in-law or of a widower to his sister-in-law.