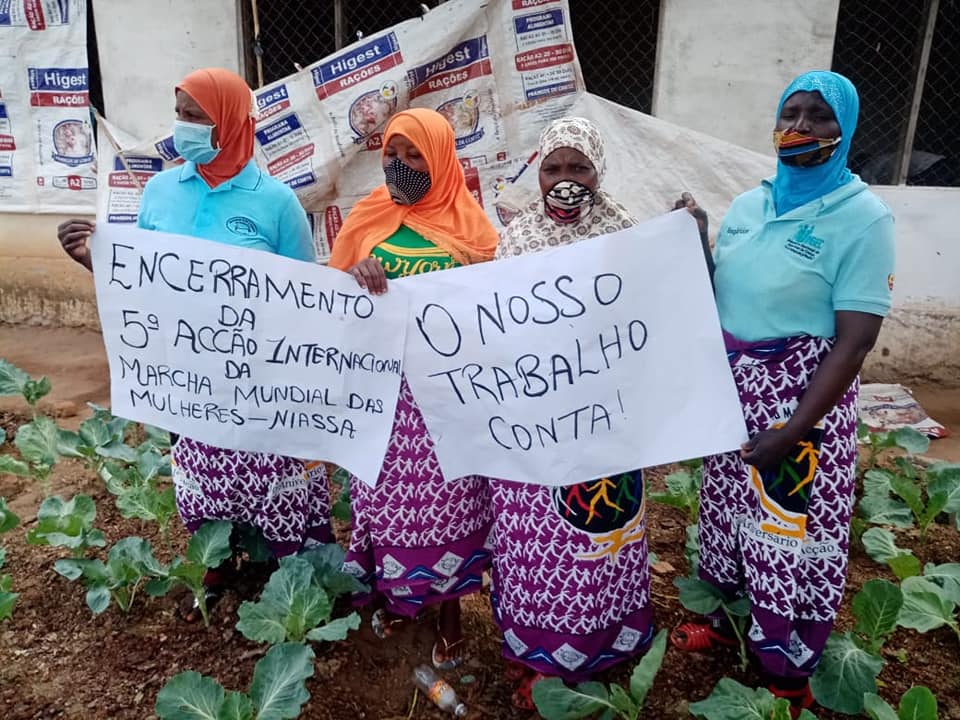 This is the page about the activities of the Africa region at the closing of the 5th International Action of the World March of Women.

The organization in Africa started long before the closing week. The WMW in Africa held three webinars in the region to discuss the lives of women in occupied and fragile territories; feminist alternatives as agroecology for food sovereignty and solidarity economy; and the impact of transnational corporations on the lives of african women.

Declaration of october 12, 2020 of the World March of Women – Francophone Africa

In Mozambique, women from Niassa and Gaza provinces held talks on agroecological practices to improve access to healthy food for their families and on how growing poultry and food contributes to women’s autonomy. They also demanded better working conditions and appreciation of women’s work. The women from Inhambane welcomed the closing of the 5th International Action of the World March of Women.

In Maputo, women and men of the Hixikanwe Association held a meeting with batucada, solidarity, memory of the victims of the conflicts. WMW Mozambique celebrated the memory of sisters living with HIV who stopped receiving their treatment during the COVID-19 pandemic. See more on MMM Mozambique’s Facebook.

Organizing and creating alternatives in Kenya

WMW Kenya organized, in partnership with the human rights organization Kenya Human Rights Commission, a meeting with kenyan women leaders. They discussed the action areas of the WMW and talked a lot about the impact of the transnational corporations and the militarization on women’s lives. Also about women’s work, migration and feminist alternatives such as agroecology. The meeting was to localize these themes and to organize the WMW’s activities around them.

Sefu Sanny, from Nairobi, sent a video in which she talks about her journey with the WMW and about the growing militarization in Africa. She recalls that the military took the power in Zimbabwe, Gabon, Sudan and now Mali. That in Somalia there are troops from the United States and even from Kenya. She talks about the violence generated by this, especially in the lives of women, who suffer most from abuse, rape, lack of access to food, and who are expelled from their places of life. They become refugees in other countries.

When the military takes power, she says, freedom of association and freedom of assembly ends. “Without these two freedoms one cannot say there is democracy or political freedom. This takes away the rights of the people, shrinks civic spaces in such a way that people cannot associate freely, meet freely, talk about their political rights. There are curfews. There are economic issues”. And there’s no freedom. Africa needs democracy, she says, “power for the people, by the people and with the people.

In Central Kenya, Margaret Ireri, special elected member of Nyandarua’s county assembly, talks about her work in organizing peasant women who use agriculture to feed their families. “We live in an area with a very high level of poverty and we cannot give up the fight for food security. We, as women, should be in the forefront to educate people on farming techniques to curb the problems such as diseases brought about by chemicalization of farming as we witness today”, she says.

Women and men lost their jobs during the pandemic. The lack of access to work and food has caused distress in families and violence. This is what Anne Wanjiku, coordinator of the WMW in Mathare, Nairobi, shares with us. “But we still cope”, she says, and calls for solidarity among women. “We come together for each other.” Comfort Achieng, also from Nairobi, made a video in which she talks about the voice that women gain when they are together — even to confront powerful transnational corporations that want to recolonize Africa.

In solidarity with Western Sahara

The meeting in Kenya decided that solidarity with Western Sahara, as a last colony in Africa, is a priority. This is important for all the World March of Women, so we join in solidarity.

October 9th, last Saturday, was the 10th anniversary of the establishment of the Gdeim Izik camp, in Western Sahara. The camp was created in protest against the continuous discrimination, poverty and human rights violations inflicted by Morocco on the Saharawi people.

The camp reached a population of 5,000 and became a huge demonstration for the independence of Western Sahara. It was dismantled by the Moroccan security forces on November 8, 2010 when 3,000 Saharawis were arrested.

On Saturday the Saharawi people once again held a demonstration against the theft of their lands by Morocco, in collusion with Spain. Once again the repression was great.