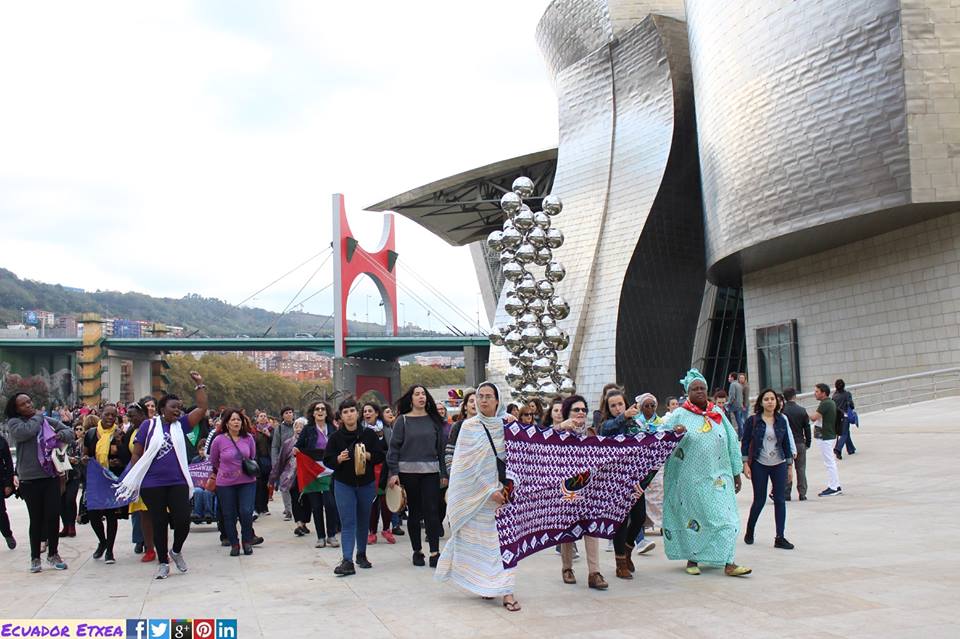 We, women of the World March of Women, gathered at our 11th International Meeting in Euskal Herria, with representatives from 36 countries reaffirm ourselves as feminists, anti-capitalists, anti-patriarchal, anti-colonialists and anti-racists and in permanent march until all women are free.

The logic of the capital and of life are absolutely irreconcilable and our responses as an organization that is plural and diverse have to be even more powerful, mobilizing on the streets and within the popular bases of support.

We identify a reorganization of the capitalist system that results on a resurgence of fascism, an increase of war conflicts, and a loss of social and economic rights. The so called crisis are no more than justifications for economic adjustments, loss of rights, the privatization of our lives, the dispossession of our bodies and the occupation of our territories. The transnational companies are increasingly concentrating wealthy and power, generating the destruction of nature, patriarchal violence and the displacement of people from the land were they have always lived. Large corporate groups control the value chains, from the extraction of natural resources to the production and distribution of goods and services; and the agro-business transnationals that produce poisons and contaminate our bodies and our lands.

The economic adjustments policies are based on women’s work, repeating well known guidance, such as reducing wages, public spending and the increase of unpaid work, at the same time that the responsibility of what is the so called crisis is passed onto the populations.

We are witnessing an attack on the governments that refuse this hegemonic system by adopting alternatives to neoliberalism and its way of perceiving life, democracy, economy and finally the distribution of power and resources across the world. In this context, economic and financial blockades are imposed as forms of political control whose consequences we can only classify as genocidal and with a devastating impact on women’s lives and bodies. The militarization of the territories, the increase of military bases and paramilitary forces becomes another weapon of neoliberalism to control and frighten the population.

This reorganization also means an increase of violence against women in all its patriarchal, racist and colonialist dimensions whose most significant manifestations are the aggression of the territories, bodies and communities for their control and exploitation, which causes great displacements, migrations, refugees, human trafficking, sexual exploitation, violence against lesbians and sexually diverse people and the militarization of life.

From our resistances in the territories we develop political and economic experiences that tackle the system of domination and exploitation, placing in the centre of our proposals the sustainability of life. The daily construction of self- organization, solidarity, agro-ecology, feminist economy, the protection of common goods and the recovery of ancestral knowledges are strategies to ensure a dignified life and to build women’s autonomy over their bodies, their sexuality and a life free of racist and patriarchal violence.

We reaffirm women’s self- organization as our strengthening strategy as political subjects that are building a worldwide movement, in alliance with movements that share with us the commitment of transforming the world and ensure people’s right to self-determination and the right to resist.

Strengthened with the collective construction in this 11th International meeting we make a call to continue our march by actively participating in the feminist struggles of our countries, in the construction of solidarity actions and in alliance with the populations and grassroots movements.

We start today organizing our 5th International action in 2020. We reaffirm the 24th of April as the day we organize our 24 hours of solidarity across the world to denounce the role of transnationals companies. We call our political movement to continue with the mobilizations denouncing the violence that women suffer and the attacks on our lives and on our territories that result in forced migration, external and internal, building alternatives from feminist economy principles that protect our ways of creating sustainable lives.

We resist to live, we march to transform