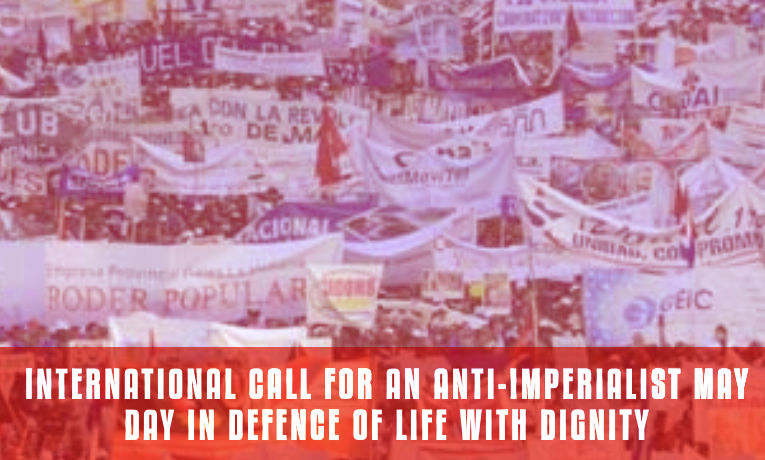 It has been more than one hundred years since the first International Worker’s Day on May 1st. It’s is a day of struggle and celebration that historically has brought millions of people from political and worker’s movement to the streets.

This May 1st, 2020, will not be the same. The necessary policies of social isolation imposed because of the COVID-19 pandemic will prevent us from gathering in the streets and squares and from picketing our places of work to show to the governments, the bosses, the banks, and to the totality of the ruling class, that we sustain this world.

For the organizations and networks that are calling for the International Week of Anti-imperialist Struggle, there is no doubt that in the context of the current public health crisis, it’s important to avoid public gatherings and break the chain of infection of the Coronavirus. We equally believe that it is essential to struggle in these moments to force governments and international organizations to put life before profit.

To continue this struggle, we have creatively reinvented our actions in the last couple of weeks, using the tools of communication and social media that our networks and people’s organizations engage with, to strengthen our role in the battle of ideas against our enemies.

This May 1st, we reaffirm that the struggles of the Working Class are alive and active; we will not stay silent as the ruling class tries to use the pandemic as a cover to persist in its atrocities and its attacks on our rights. We call upon all anti-imperialists: networks, movements, trade unions, parties, political leaders, members of parliament, intellectuals, artists, and religious leaders to raise their voices on this May 1st, 2020.

1. We denounce imperialism and the attempt of right-wing governments and transnational corporations to offload the costs of the current global crisis onto the working-class; It is the workers of the informal economy that disproportionately bear this burden, in particular women, Afro-descendant people, Dalits, migrants, refugees, and all of the sectors that occupy the peripheral areas of the system.

2. We defend the right to a dignified life with full employment and labour rights. Capital attempts to offload the costs of the public health crisis through layoffs, evictions, salary cuts to formal workers, as well as the exclusion of millions of informal workers with no fixed income or guaranteed labour rights. At this moment, agricultural workers, under challenging conditions and the domination of capital, confront the risk of shortages and continue to produce food to sustain the cities under quarantine. It is urgent to continue building organizations of the working class that can allow for improvements to their conditions of life and work and struggles for their emancipation.

3. We demand that governments put all public and private resources at the service of controlling and alleviating the effects of this pandemic, strengthening the instruments of social protection that neoliberal policies have hollowed during the past several decades, principally: labour and union rights;social rights of income distribution; public and free health and education systems, with public production of science and technology; and policies of distribution of land and housing;

4. We demonstrate our solidarity with all health workers, who are putting their lives at risk to save the millions of victims who have COVID-19. We stand in solidarity with their demand for increased state investment in public health and universal access to healthcare.

5. We demand policies to fight the patriarchy so that women can lead a life free of violence. Domestic violence has increased globally during lockdowns; governments and people’s movements must address this. We demand an end to the attacks on the rights of women workers; this is even more pressing during this pandemic since women make up around 75% of healthcare workers. We also demand the reorganization of domestic labour and care work and for men, governments, and communities to take responsibility for the sustainability of life.

7. We demand an end to the criminal financial and economic sanctions imposed by the imperialist US government against 39 countries. These sanctions are focused with the most considerable force against Venezuela, Cuba, and Iran, where their people already suffered from a lack of medicine and medical supplies before the pandemic. These countries under sanctions, also face hybrid wars as punishment for maintaining their political independence, their sovereignty and self-determination, and for refusing to submit to US hegemony.

8. We affirm our commitment to defeating the coordinated international efforts of neo-fascist and far-right movements, that propagate hate, xenophobia, racism, misogyny, authoritarianism, and that amid the pandemic seek an economic, political, and ideological confrontation against China on a global level.

9. We call for a deep-rooted and fraternal debate about what alternative society the people of the world want as we face this current pandemic and the broader dilemmas of humanity. Our crisis has been constant since at least 2009, but now it has been intensified by the COVID-19 pandemic.

10. We call to build internationalism, unity, and solidarity among the peoples of the world, following the example of anti-imperialists that came before us, as well as the heroic example of the Cuban, Venezuelan, and Chinese people. Finally, we reaffirm that in this period of the pandemic, we must continue to maintain international spaces of coordination to stop the far right, US imperialism, and defend life, peace, and social justice. We are committed to continuing to build a week of anti-imperialist mobilization in the second half of 2020.