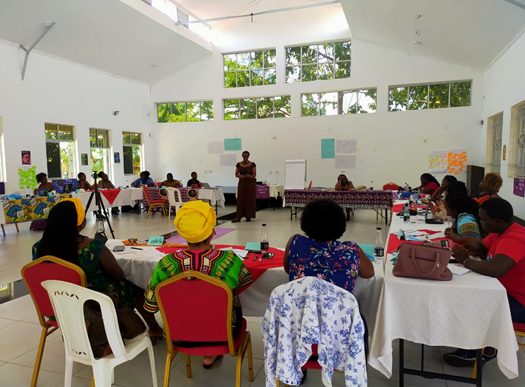 WMW Kisumu chapter consist of women of diversity who are committed and have passion in addressing issues affecting girls and women. The unique expertise of all members forms an excellent platform to build the movement. Women play an outsized role responding to issues affecting them though they are the most enduring the worst when it comes to peace, equality, freedom and justice. We believe in solidarity, inclusivity of girls and women in the movement as a way to connect, to share experiences, to mentor, to bridge intergenerational gap and to form grassroots movement of girls and women who are empowered and informed to champion their rights.

On January 14 and 15 of this year, we organized a great moment of political formation among the members of the WMW. In this way, members were able to understand the systems of oppression, Introduction of agroecology for food sovereignity, building feminist economy and movement. From the discussions it came out that components of culture plays a role in positioning women in the society hence hindering girls and women to explore their potential in taking part in decision making in various sectors. We are on the march to break negative gender boxes on political, social and the economy to enhance women participation, access to information and fair ground to take up leadership roles. During the trainings members came up with three corners, where they highlighted personal strengths, challenges, gaps and strategies on how to build on grassroots movement in the new normal phase.

Making peace with the environment

Women play essential roles in the management of resources as WMW Kisumu, children and other stakeholders joined in the launch of tree a planting campaign. On February 6th of this year, 300 trees were planted as a way to appreciate nature. This was more of reconnecting with the environment and being at the center of environment conservation and addressing environmental issues.

See below some pictures of the activity!