In every part of the world, we women are all coming out into the streets to rejoice in the collective strength that we are building together, through our organization. Marching allows us to reclaim our silenced voices and memories. 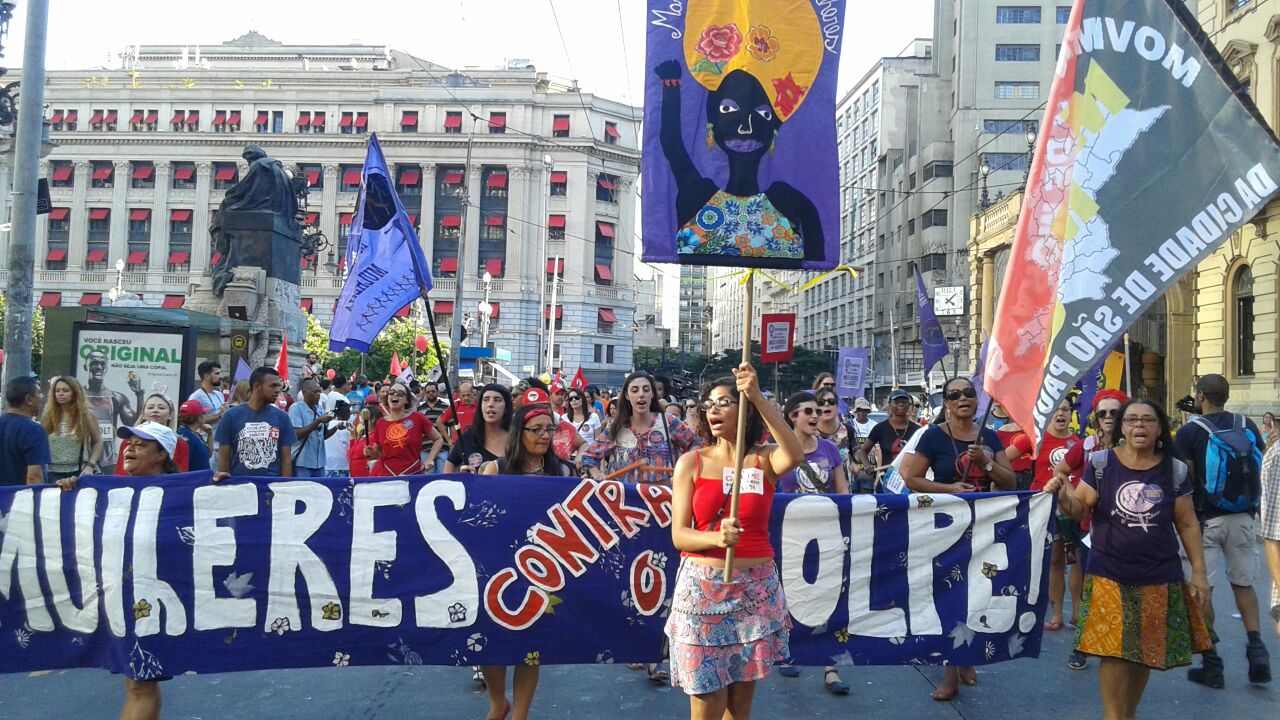 In every part of the world, we women are all coming out into the streets to rejoice in the collective strength that we are building together, through our organization. Marching allows us to reclaim our silenced voices and memories.

Our collective struggle has challenged the patriarchy, denormalized violence against our bodies and demanded recognition for our work and for our contributions to the economy and for society as a whole.

The power of women’s struggles has been felt throughout history and in our daily lives. It bears the stamp of rebellion and dreams: rebellion against injustice and domination, and dreams of freedom, equality, justice and harmony between all people and with nature.

The World March of Women is a part of this vast movement. We are a diverse group of women, representing different peoples, different ethnic groups and different ages, who have come together as an international movement fighting to change the world and women’s lives.

We affirm that the processes of capital accumulation are incompatible with sustaining life. Our response, as a diverse, composite organization, must build our strength each and every day, at the level of the people and the masses, working in and toward the construction of an economy for life.

The expansion of feminism and its revitalization among the generations call on us to continue to resist and to fight, to advocate for equality, diversity and sexual dissidence, and to assert our feminist solidarity and radicality.

We continue to bolster women’s self-organization, as well as strategic feminism, in the struggles against racist, colonialism and patriarchal capitalism. In this way, we encourage more democratic and more horizontal forms for building the people’s power.

The rise in feminist struggles is butting heads with patriarchal reactionism. We need to stand strong against the conservatism that is renewing its offensive to control our bodies and our sexuality. We must confront the neoliberal forces that try to reduce our powerful, antisystemic demands to statements of conduct that are acceptable to the markets.

We affirm the central nature of work in the sustainability of life and, based on that, we are building our antisystemic feminism.

This year, on March 8, we will be marching to denounce the austerity policies that have been the reality in many countries over the past decade.

Once again, we are denouncing the fact that neoliberal policies are borne on the back of women’s work, which absorbs the impact of reduced wages and public investments in rights and services.

These policies have only produced more poverty and instability in the lives of the working classes, more violence against women and an increase in racism and xenophobia. We say No to precarious lives!

Fascist elements are now a part of governments and the rise of the far right in many societies, where war is intensifying, as are militarization, criminalization and the persecution of leaderships. The forces on the right, where different expressions of neoliberalism and conservatism converge, are attacking democracy, in both its form and its substance.

They use violence to clear any possible obstacles to their profits. Major transnational corporations are acting with ever more power and immunity each day and are putting pressure on trade agreements and investments, which pave the way for new violations and control over territories, destroying nature and expelling peoples from the places where they have always lived. In this context, it is increasingly clear the contradiction between the processes that ensure the profit of transnational dynamics and sustainability of life. Therefore, let’s put LIVES in the center!

From a basis of feminism, we are mobilizing against colonialism, racism and heteropatriarchal reactionism, which hinge on and express the rise in violence. Violence demands this domination-based model. To surmount it, more than mere legal change is necessary.

The strength of women who, throughout the planet, use their bodies and their voices to denounce harassment and feminicide, highlights the vital importance of confronting every aspect of this violence, as part of antisystemic struggles.

The present moment demands an intensification of our feminist and popular forms of resistance, a strengthening of our alliances and the continuous construction of a global movement, as a strategy for countering the power of this system of domination, which is deepening its imperialist nature.

We women say NO to war and to the intervention of the United States and its allies in our countries. All across the planet, these experiences have been detrimental, and we ask the world’s States to join their voices to ours. We denounce the way in which racist, colonialist and patriarchal capitalism benefits by keeping the displaced women in a precarious situation, appropriating their work, their lives and their bodies.

We stand together with the peoples who continue to fight to defend their sovereignty. At this particular moment in time, we stand strong with the Venezuelan people, who are defending the legitimacy of their government, its income distribution policies and its public services, and who are affirming the sovereignty of the people.

We, in the World March of Women, have mobilized for food sovereignty and for common goods, by reinforcing popular, antisystemic discourse in feminism. In rural and urban areas, we will be mobilizing on March 8 and will continue our process of ongoing, irreversible organization, a movement based on solidarity and joint action. We are marching and are preparing for the 5th International Action of the World March of Women, which will be taking place in 2020, under the slogan.

“Resisting to live, marching to transform!”