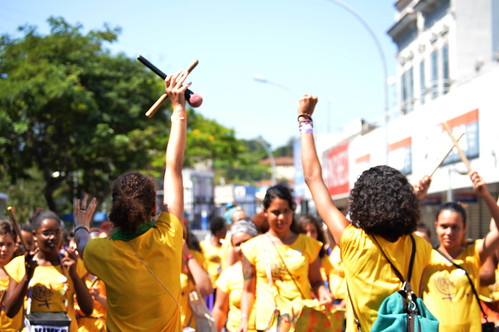 The World March of Women is part of the group of international organizations that together with the International Assembly of Peoples is calling for the International Week of Anti-imperialist Struggle, from 25 to 31 May. Organised by various movements, networks and organizations around the world, the Anti-imperialist Week will be a key moment for building and expressing strategic alliances to confront the imperialist offensive and the rise of the extreme right around the world.

Women are part of this resistance, and in the framework of our 5th International Action 2020 we will reinforce, on the Anti-Imperialist Week, the commitment to building alliances with social movements from the self-organization of women. Thus, in the week of May 25 to 31 , we will carry out activities of the World March of Women and/or we will build joint actions, according to the decision of each country.

CALL FOR AN INTERNATIONAL WEEK OF ANTI-IMPERIALIST STRUGGLE

Popular organizations, social movements, political organizations, and international networks and platforms present in Havana from November 1 to 3, 2019, we call upon all of you to join us in an International Week of Struggle Against Imperialism during the last week of May 2020.

We are living in a time of great uncertainty about the future of humanity and the planet. The logic of capital accumulation has generated an unprecedented level of inequality among people never seen before. The international crisis is not just an economic crisis to strengthen the reproduction of capital, but rather a social crisis, a political crisis, an environmental crisis and a crisis of values on which our societies are based today. We are facing a civilizing crisis that puts life on planet earth itself at risk.

In this context, capital seeks to maintain its rates of profit at the cost of the rights of peoples and communities and driven by the appropriation of strategic natural assets. It is an offensive that simultaneously highlights the inability of republican states to defend principles of equity and national sovereignty, and puts the liberal democracies in crisis by highlighting the power wielded collectively by media corporations, transnational economic monopolies and the power of the judiciary. Neoliberalism does not represent a hope, nor does it offer solutions for the great majority of peoples. It is in this context that we see the attempts to strengthen racist, xenophobic authoritarian proposals, like those seen in Europe, the United States, in Brazil and in India.

Faced with this reality, people all over the world are resisting. The Cuban and Bolivarian Revolutions are bravely resisting the imperial counteroffensive that has deepened the economic blockade while supporting illegitimate attempts at coups against, and attempts to destabilize, legitimate popular governments. In addition, the streets of several countries have been taken over by thousands of people demanding their rights and a dignified life. We have seen massive mobilizations in Chile, Ecuador, Peru, Colombia, Haiti, Lebanon, Algeria, Sudan, Spain, South Africa and many other countries.

This has shown us that we must greatly improve the international coordination of our struggles and actions, reaffirming that we have a common enemy: U.S. Imperialism and the advance of neoliberalism in our countries.

Therefore, from May 25 to May 31, 2020, we will take to the streets in each of our countries with massive, and united mobilizations in an internationally coordinated action against Imperialism and all the ways it manifests in our countries, in our territories and in our bodies. We know that our dreams are rooted in our struggles, and our strength in our brotherhood and unity. Let us unite our hopes to build a world where all live with dignity!

We resist to live, We march to transform!