In defense of democracy, against neo-liberalism. 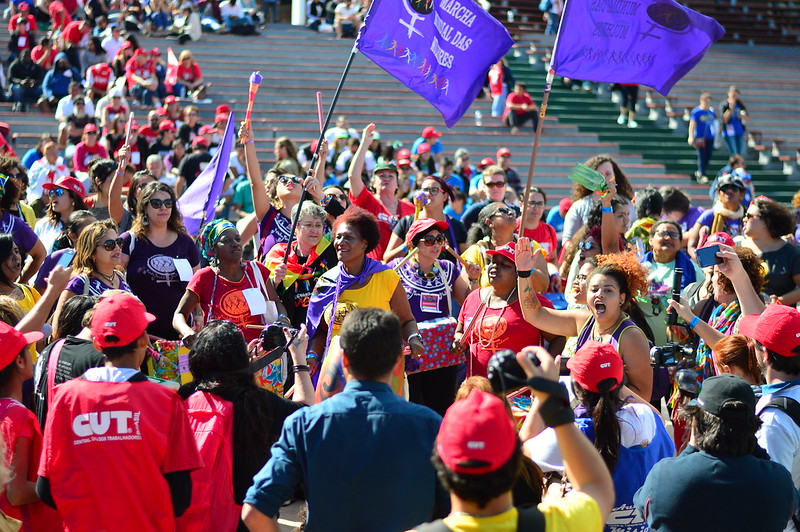 The struggle for democracy, the struggle to confront neo-liberalism and to build a society based on the sovereignty of the people and social, environmental, economic and gender justice takes place from January to January. The organizations and movements of unions, women, peasants, environmentalists who met in November 2015 to create the Jornada Continental for Democracy and Against Neo-liberalism have resisted, fought, and built alternatives for and by the peoples of Americas for decades. October and November 2020 will be important moments in this struggle. The Jornada will mobilize throughout the continent, in a common program of struggle, and will show the popular responses in the confrontation with capitalism. On September 22, Jornada held a Dialogue for unity, democracy and the life of our peoples, where the document “Responses and horizons of joint construction in the face of the crisis unleashed by neo-liberalism” was presented.

For the organizations and movements that take part in Jornada, the global health crisis is the result of the neoliberal economic model. The absurdities that capitalism implies are manifested in the consequences of privatization policies, the reduction of the State, the precariousness of work and the greater exploitation of women’s work, the increase in debt, the commodification and financialization of nature. These consequences are hunger, unemployment, racism, violence against women, the criminalization of resistance to this state of things.

The document presented by Jornada brings answers and a horizon of joint construction in the face of this crisis unleashed by neo-liberalism, as well as a calendar of struggles and mobilizations. “We are people of the street and of the foot. Let’s open ourselves to a process of unity in diversity, in walking. This is the only way to gain strength in this battle that has another fundamental component: this technological revolution in the hands of a homogenizing and monopolized capitalism, which puts us in the dispute of the hearts of the people,” said Joel Suárez Rodes, of the Martin Luther King Center, Cuba. “We will contribute this articulation from our capacities, large and small. Accepting the challenges in the multiple forms in which the domination of capital is presented. In the multiple forms in which social pain appears we need to have a voice, company and solidarity”.

In this period of crisis, “the United States empire, with Trump, reinforced its most intolerant, repressive, xenophobic and aggressive face with the people. We see how the sanctions are getting bigger and bigger and how the intent to suffocate people who want to build their own destiny as nation. Meanwhile, the countries orbiting under the US there is tremendous repression against the people and attempts to weaken the democracies that we have built with so much effort in our continent. Behind all this are the interests of the US,” said Manuel Bertoldi of Alba Movimientos.

Francisco Vladimir of Jubilee South has spoken of the imperialist plundering carried out by the international financial institutions in alliance with the governments: the system of perpetual, illegitimate and illegal debts. “In this time of pandemic, they are coming back with more force to exploit people, territories and nature. They want to find ways to rescue money, not people. We repudiate the practices of banks and financial institutions of agreements that threaten our sovereignty, self-determination and historical memory. The looting that makes the lives of people and peoples invisible, increases impoverishment, inequality and the devastation of our common goods and creates inequality.”

“We want alternative projects and development models to neo-liberalism. We want strong states capable of generating social protection and public enterprises that allow us to face the challenges we have in each country and that do not force us to subsist at the cost of debts. We want sustainable development projects with sovereignty”, adds Barbara Figueiroa, from the Central and Confederation of Trade Unions of the Americas (CSA).

In defense of democracy and life

In Bolivia, where there will be presidential elections on October 18; in Chile, where there will be a referendum for a new constitution on October 25; in the United States, where presidential elections will conclude on November 3, people are fighting to guarantee democracy. In the U.S., “what seemed impossible six months ago is now becoming reasonable demands: a moratorium on student debt, cancellation of mortgages and rents, putting essential workers who have taken care of lives at the center. Rescue people, not corporations,” says Cindy Wiesner of the Global Grassroots Justice Alliance. She calls for the internationalist solidarity with the people of the United States, where Trump is maneuvering not to accept the election result if he is defeated.

In addition to the institutional processes in Bolivia, Chile and the United States; solidarity in the face of aggressions against Cuba, Nicaragua and Venezuela, other important activities take place in October and November. The campaign #PueblosSoberanosPueblosSolidarios (Sovereign peoples, Solidarity peoples), articulated mainly by the Via Campesina; the Week of Anti-Imperialist Action promoted by the International Peoples Assembly, the closing of the 5th International Action of the World March of Women, the Week of Global Action Against Debt convened by the Jubileo Sur Americas, the Day of Decent Work of the CSA.

We need to build internationalist and popular solidarity, “defending the territories, denouncing sexist and racist violence and democratic setbacks in our countries: our movements are actions in defense of life,” says Alejandra Laprea of the World March of Women. “Faced with the agenda of death and each one for himself, we bring as a proposal to put the sustainability of life in the center and do it in common. We thus affirm our alternative vision to the dominant economy, whose objective is private profit, the accumulation and concentration of capital in a few hands and where life has no place”.