April 24: Declaration of Feminist and International Solidarity Against the Power of Transnational Corporations 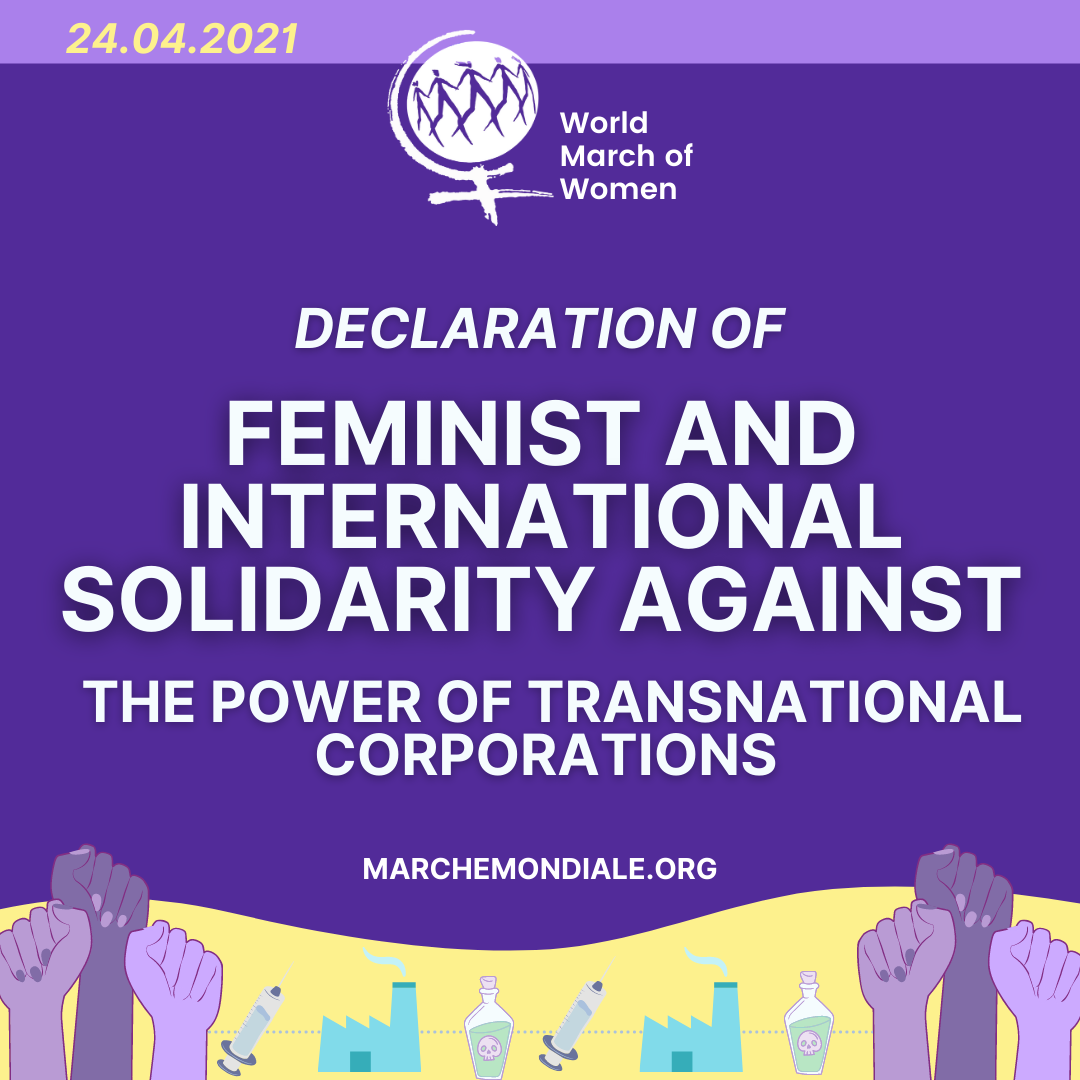 On April 24th, we, the militants of the World March of Women, bring our voices together to denounce and unite in feminist solidarity against the power of transnational corporations that exploit and destroy women’s lives.

Our actions first started in 2013, when the Rana Plaza building collapsed and destroyed thousands of lives of women who worked in completely inhumane and precarious conditions in Bangladesh. In 2021, we were outraged by another episode in which a fire broke out at a textile manufacturing factory in Morocco and killed 26 working men and women.

Our feminist and anti-capitalist resistance against corporate power exists precisely in our collective confrontation of different realities, peoples, and places, to stop transnational corporations from moving forward with their actions. Expropriation is something that brings us together across continents, and it is carried out by companies that are driven by the colonialist, racist, and patriarchal logic.

We denounce the dramatic situation faced by our sisters in northern Mozambique, in the Cabo Delgado Province: multinational companies arrived in the area after being granted licenses to explore oil and other natural resources, making the local population struggle because their land and livelihoods are encroached and wars and terror force people to leave their territories in search of safety. While these companies first arrived with the promise of “progress,” they destroy biodiversity and traditional knowledge and force people out, using women and girls as instruments of conflict. They are being killed, kidnapped, arrested, and abused. Situations like the one in Cabo Delgado are also happening in other parts of the world, such as with the nickel mining in New Caledonia.

This year 2021 is the second year we celebrate this date amid the COVID-19 pandemic, which has aggravated the poor living conditions of millions of women around the world. In this context, we witness the rise of authoritarianism in many governments, police brutality against the people in the name of mandatory lockdowns, or cases such as the Brazilian government, which is pushing science denialism and promoting the false choice economy v. life.

While rich countries in the North have made great breakthroughs in vaccination, we see this right being denied to nations in the Global South. Big pharmaceutical companies, most of which from the Global North, have increased their profits and are organizing initiatives to offer “solutions” to distribute vaccines in countries that cannot afford them. However, they fail to mention the fact that they are the same countries that are negotiating with vaccine manufacturers and securing much larger vaccine stocks than they actually need.

We know these tactics, they commodify people’s health and life by controlling the production and distribution of medications and patents, which become true weapons of war.

In these times, we, the World March of Women, have been invested in collective strategies of solidarity to put the sustainability of life on center stage around the world, through self-organizing and alliances with social movements that aim to change the economy to dismantle corporate power.

Our internationalist feminist solidarity will keep us moving, resisting to live, marching to transform!