“Air, air, open the borders! The Mediterranean is a cemetery!” 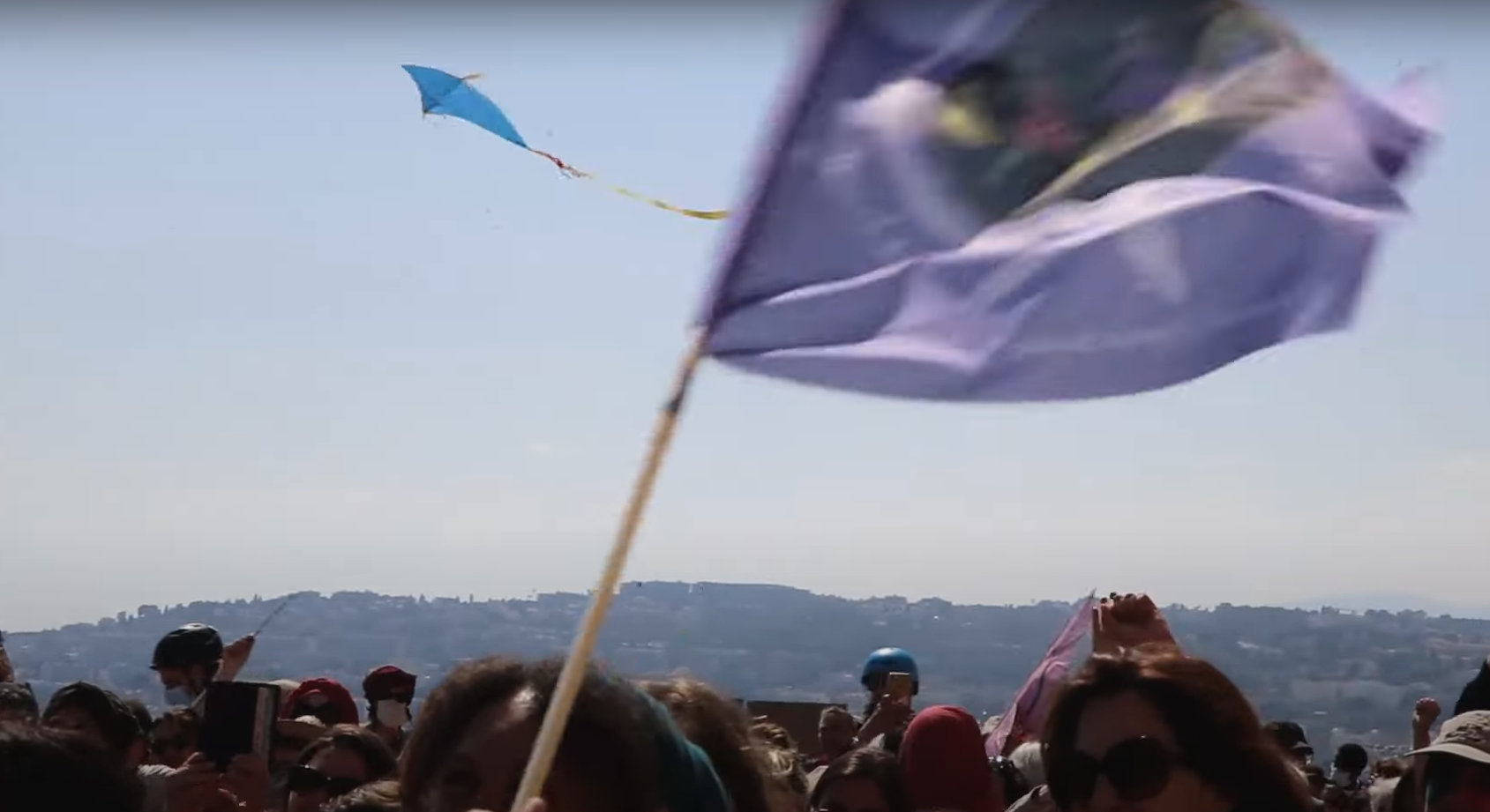 Thousands of feminists from all over Europe demonstrated in the streets of Nice and along the Mediterranean Sea on Saturday, June 5, singing and dancing to affirm loud and clear that freedom of movement is a fundamental freedom. Despite all the headwinds, the call of Toutes aux Frontières for a Europe without walls resounded throughout the city: feminists from more than 20 countries and different continents made their voices heard to denounce the current European migration policies, the militarization of borders, the criminalization of migrants and those in solidarity, the violence against women, children and gender and sexual minorities on the road to exile.

Organized for many months, despite the pandemic, this unprecedented action is the culmination of a motivation and cooperation carried by feminists across several European countries following the European meeting organized by the WMW/Switzerland in Geneva in September 2019. On June 5th in Nice, the speeches and artistic performances made visible the paths, difficulties, but also the strength, creativity and determination of those who are on the front line of racism, xenophobia and patriarchal oppressions.

The call for the second phase of Toutes Aux Frontières! has already been launched: for this autumn we are preparing an international feminist campaign with multiple actions, including a petition for the systematic recognition of the grounds for asylum specific to women, girls and LGBTQI+ people. Because in addition to the many reasons that push men to go into exile, women, girls and LGBTQI+ people face extreme violence in their country of origin and on the road to exile, such as rape, forced marriages, sexual exploitation, trafficking, genital mutilation, repudiation,…

These specific reasons for asylum for women, girls and LGBTQI+ people are rarely recognized in Europe today. This is why we are currently working to create a broad coalition of migrant and refugee rights organizations to launch a European feminist petition to the European Commission and national governments in the Schengen area. We want the right to protection to be guaranteed through the effective recognition of all grounds for asylum specific to women, girls and LGBTQI+ people. Such a guarantee includes systematic access to structures for identifying and supporting victims of trafficking and violence based on gender and non-heterosexual sexual orientation. The presence of female social workers, interpreters, health care personnel, psychologists and legal experts who are sensitive to LGBTQI+ issues in shelters and reception centers. The detention of women and their accompanying children, girls and LGBTQI+ people in exile must be outlawed.

The petition, which is in the process of being drawn up, will also demand that all national governments in Europe, which have signed the Istanbul Convention and the Convention on Action against Trafficking in Human Beings, put in place implementing legislation and provide themselves with the necessary means to create adequate structures for the effective recognition of the specific grounds for asylum for women, girls and LGBTQI+ people. It will strongly denounce the draft European pact on migration and asylum presented in September 2020 by the European Commission, which cements Fortress Europe, by instituting in particular a tougher border regime, accelerated border procedures, a discharge of the duty of reception on third countries not members of the European Union. We denounce this draft pact that weakens the rights of refugees and demand that facilitated legal channels allow women, girls and LGBTQI+ people to apply for asylum in Europe.

We continue with joy, courage and anger our struggle for a world free from murderous borders, free from patriarchy.