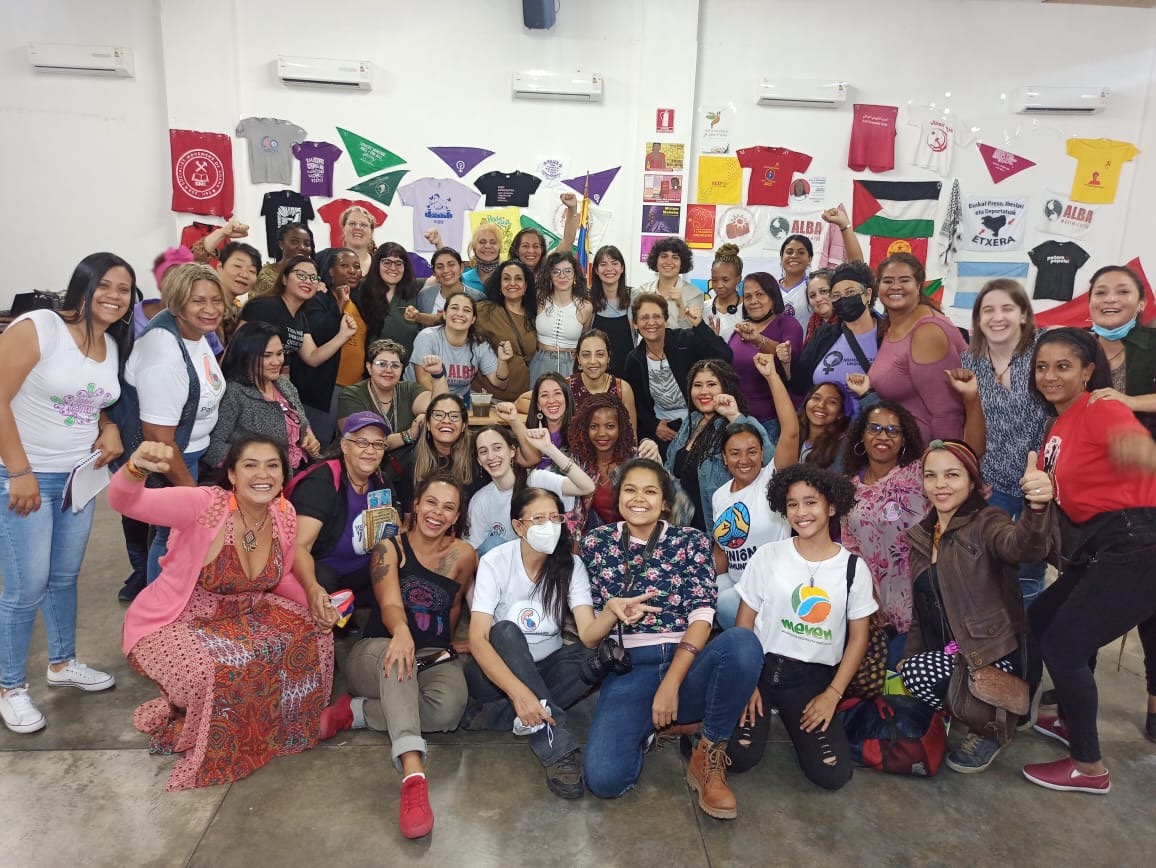 The International Feminist Brigade had the chance to evaluate the main difficulties faced by women in the context of their struggle against patriarchal, capitalist, and imperialists, through visits, conversations, and meetings with women from the public and communes for 10 days. The World March of Women also participated in the brigade with Ella Craciun, Pınar Yüksek from Europe, Camila Dantas Araujo dos Santos, Marilys Zayas Shuman, Elpidia Moreno Hernandez, the Americas, Abeer Hasan A. Abu Khdeir, and MENA regions.

Marilys Zayas is a communicator and militant of the WMW Cuba, with a history of militancy from the feminist and communist youth movements to strengthen international solidarity between the two countries. She shared her story about the brigade:

The brigade, which had the chance to see closely how the sanctions imposed on Venezuela since 2016 adversely affected the Venezuelan people and especially women in terms of human rights, was also able to see the structure that Venezuelans built together with Commander Chavez, their struggle for independence and anti-imperialism.

Abeer Hasan A. Abu Khdeir from Palestine share her thoughts;

Also, they witnessed Venezuela’s recovery with its own efforts. In this context, the brigade, who also received information about the functioning and structure of social organizations and the established organized system, had the chance to listen to how women took place in productive, organizational, political, and economic fields from a feminist perspective in this well- organized established system.

Emphasizing that this brigade is only a start to continue the construction and strengthening of the relations between revolutionary feminist women around the world against capitalist and imperialist patriarchy, it also highlighted the facts about Venezuela against the lies of imperialism and the experiences of Venezuela’s revolutionary and feminist process that are important for the whole world. He left Venezuela to preach and organize.

The feminist struggle is internationalist. Therefore, aligned with socialist ideas and principles, we declare that we are all workers. Women of all countries must unite and must actively oppose the oppressions that we face: patriarchy, colonialism, racism, imperialism, capitalism, neoliberalism, among others.

All of these societal ills are expressed as the devastating feminization of poverty, the rise of patriarchal and gender violence, the crisis of care work, the theft of our sexual and reproductive rights, the aggression against peoples in the form of blockades, sanctions, conventional war and hybrid war, among other plagues that affect us women in diverse ways.

However, the history of humanity and of popular struggles has witnessed the organized mobilization of women who are determined to struggle for the rights and the dreams of freedom of all peoples all across the world. Women who, with raised consciousness, felt the necessity of contributing to the causes of justice. Women who, in contexts of war, have struggled as combatants, strategists, organizers, caregivers, among other tasks, always inspired by solidarity, voluntary work, and need for a political horizon that is guided by the spirit of internationalism.

In this spirit, and in the spirit of solidarity, the Simon Bolivar Institute for Peace and Solidarity (ISB) together with the International Assembly of Peoples (AIP) agreed to organize an international feminist brigade to visit revolutionary Venezuela.

The ISB and the AIP have a strategic articulation which includes a number of joint actions, including organize brigades with the intention of making disseminating the reality of the Bolivarian revolution and its struggles in order to strengthen solidarity networks in the countries where the AIP has an impact.

All these brigades or delegations are organized on a project basis. The preparation of these projects takes months of work for their development and organization. The international feminist brigade was agreed on in a planning meeting held during the Bicentennial Congress of the Peoples of the World in June 2021. From this agreement began to organize the process of preparation, recruitment of participants, organization of funds for the trip to Venezuela and a host of tasks that have been completed to realize this first edition of the international feminist brigade “Alexandra Kollontai” which took place in Venezuela from 17 to 27 June.

The brigade is named after the revolutionary feminist and internationalist leader, Alexandra Kollontai. She was a woman who broke new ground to recognize women as a transformative force. For Kollontai, feminism cannot be separated from a class analysis, and she criticized bourgeois feminism for its individualization of women’s struggle. Kollontai also pushed the participation of women in areas of production, in the trade unions, in the party, being a complex struggle in a time of many prejudices and moralisms. Kollontai was a pioneer in the exercise of political leadership as the first woman minister and the first woman ambassador. She dedicated her militancy and intellectual production to build advanced proposals for the liberation of women, such as achieving civil rights, policies for the socialization of household chores, theorizing about love and sexuality, among others, therefore, the mystique of brigade has been to commemorate the 150 years of birth of this leader and the validity of her work and thought.

The International Peoples’ Assembly, an internationalist process that has brought together more than 200 organizations from 6 regions of the world, has nominated women comrades from all regions and from different countries and organizations to participate in this first brigade. The women are leaders in their parties and organizations with different experiences of struggle, and with a great desire to learn from the Bolivarian process and other experiences that are represented in this brigade.

Throughout the agenda of the brigade, these women from all over the world have been able to exchange experiences of struggle with Venezuelan women, learn about their resistance and victories, their struggles in the communes, their roles in the communal councils, the local supply and production councils, the social missions, the Bolívar and Chávez battle units of the United Socialist Party of Venezuela (PSUV), and also met with historical women leaders of the revolution, academics, cultural leaders, and women in the exercise of political power, who hold elected or appointed positions. All are expressions of popular feminism in Venezuela, and are the concrete result of a revolution in which the working class takes power.

In addition, the brigade has created opportunities for concrete exchange between the feminist struggles of the different peoples represented by the members of the brigade, with the interest of promoting processes of exchange, in order to contribute to the articulation of revolutionary and anti-imperialist feminism in our current moment of escalating attacks on the working and oppressed peoples of the world.

“ Capitalism has placed a crushing burden on woman’s shoulders: it has made her a wage-worker without having reduced her cares as housekeeper or mother.”

The world today, affected by the pandemic, has women from all continents at the forefront of struggle and resistance. The response and the solution to this capitalist-imperialist-patriarchal crisis that comes from popular and revolutionary feminism is the collective gamble, the permanent mobilization and organization, to build a society of justice, without oppression of class, ethnicity, age, gender or sexual orientation. This is impossible to achieve within the framework of capitalist hegemony.

We understand that feminism is in dispute. The liberal and conservative currents, attached to their ideas of individual freedom, human rights and equality, pretend that imperialist oppression, exploitation and the colonizing policies don’t exist.

Today, this sector has intentionally used all its media, political, legal and financial apparatus to construct a narrative against the revolutionary and legitimate governments of the region, such as Cuba, Nicaragua and Venezuela. Their actions are utilitarian, as simply visibilizing women’s issues has never solved the structural problems that cause them. The interest lies in the use of these narratives to justify a higher level of escalation of aggressive policies against these governments and the processes they represent. There is no doubt that these processes guide revolutionary and socialist struggle, therefore it is our militant duty to protect and defend them.

As the first International Feminist Brigade “Alexandra Kollontai,” we are convinced that in Venezuela there is a revolution. Recognizing all the contradictions and challenges that do exist, we have seen and we have lived a revolution in Venezuela that is concrete, that is in process, and that has the face of women.

The Bolivarian process has a revolutionary leadership led by President Nicolas Maduro Moros, a president loyal to the people, elected and ratified by the people, who will never surrender to imperialist harassment.

We are coming out of this experience convinced and committed that this brigade is the only the beginning of a project of solidarity, collaboration, cooperation, and conspiracy among revolutionary women around the world. We are returning to our countries and struggles with a higher and stronger level of unity than before, and in unity, as militants, we commit ourselves to the following:

We are convinced that capitalism, imperialism, and patriarchy will fall, and it will not fall by chance; we are going to unravel it with our own hands.

Without Feminism there is no socialism! A beautiful woman is a woman who struggles! Let’s build, let’s organize, popular feminism!