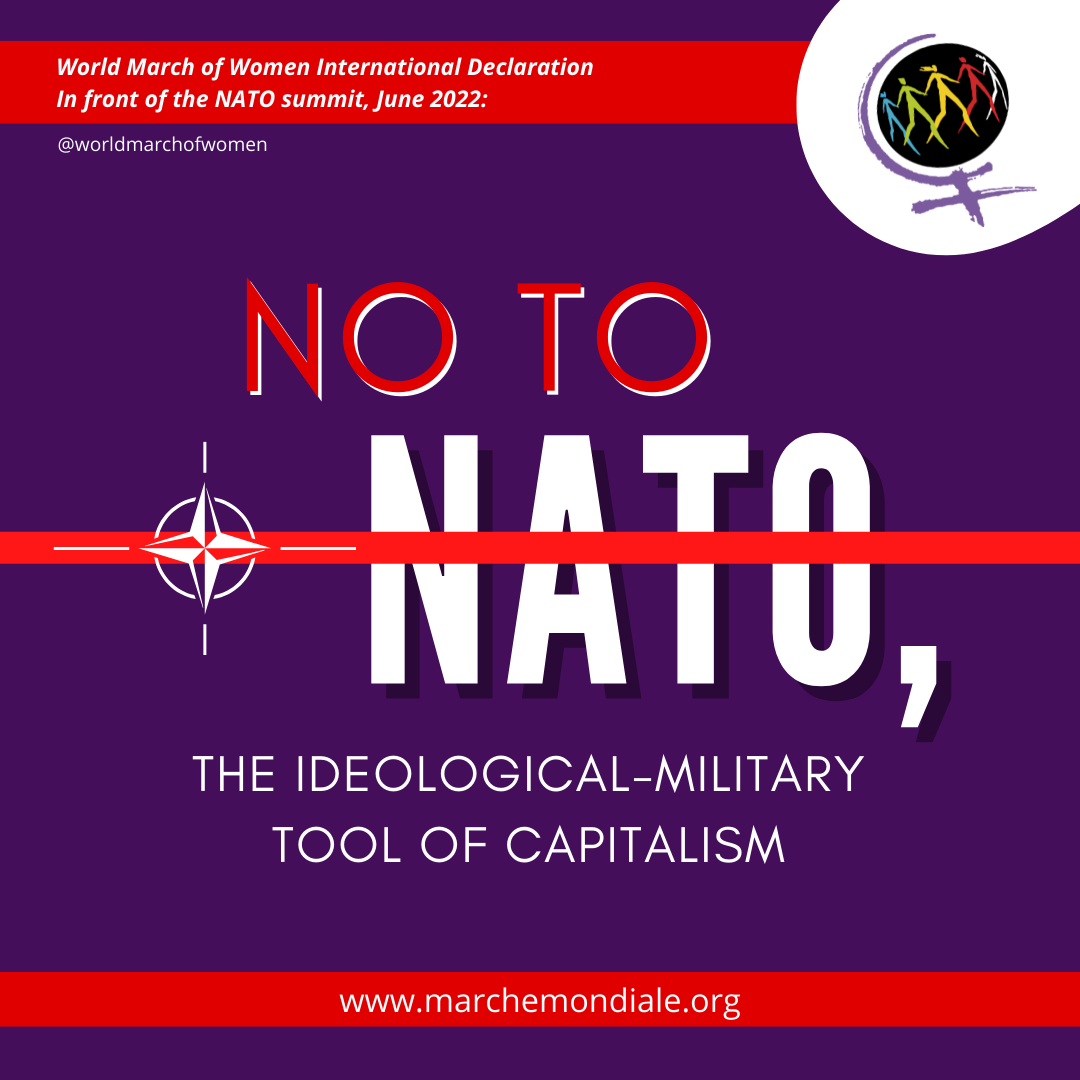 We, militants of the World March of Women, denounce the role that NATO plays in the world as a tool of Western capital to establish and reinforce a criminal system that attacks head-on the lives of millions of people in the world and the sovereignty of their peoples. Born as a tool to combat the socialist bloc, NATO has since been a tool for the military, ideological and economic expansion of capital in the world.

As anti-capitalist feminists our agenda has as its center of action the radical defense of life against the offensive of the markets and their coercive and military mechanisms to impose exploitation, violence and the plundering of our lives, our bodies and our territories.

As anti-imperialists we denounce the role that NATO, a tool of imperialism, plays in the process of capitalist accumulation and dispossession. Anti-imperialism is fundamental to build a popular feminism capable of providing alternatives for a world with justice, equality, peace and solidarity.

We are living in a moment of reorganization of a transnational capital that needs to seek its own survival in an extreme situation: a moment of increased plundering of common goods, exploitation of labor and women’s unpaid work, multidimensional crises (climate, food, financial and care) and exacerbation of racism. The extreme right-wing forces in several countries are confronted by popular movements and, driven by geopolitical disputes, threaten US hegemony, a state moreover plunged into a serious crisis.

In this context, the world oligarchies are once again betting on a return to the war economy, which serves not only for accumulation and enrichment, but also for social discipline and control. It is in this scenario that NATO plays its role as a tool at the service of imperialism, applying not only a logic of militarization, but above all a cultural and ideological struggle to impose the agenda of capital.

As feminists we know that the military and dispossession logics of capital impact most strongly on the lives of women because it is life itself that is under attack. We are the working women on whom rests, all over the planet, the task of reproducing life, even in those places where the State takes on some part of this task in times of economic crisis, it is from there that resources are first withdrawn and where the cuts first impact. In States where the impact of ideological and economic warfare accompanies militarization and warlike conflict, it is women, our bodies and our lives, who are the first to suffer the consequences as we see in every conflict that capital sets in motion to enrich itself.

We denounce the role of the NATO member states in their policy of reinforcement and capitalist expansion throughout the world, bending to the mandates of the oligarchies and not to that of the peoples, as well as that of all those who draw up alliances for the expansion or strengthening of this structure at world level.

Europe is living today a war fomented by the economic interests of Western transnational capital and the military response of a Russia in the hands of the oligarchy that NATO is taking advantage of to accelerate its process of expansion in Europe and Africa, not only to refloat the USA with the war economy but also to impose the agenda of capitalism in the world and the reorganization of its survival.

This agenda is being used to contain the growing social discontent resulting from the rising cost of living due to a system in crisis that seeks maximum profit at the expense of the working class, impoverishing more and more of the population, with special impact on women.

Faced with the NATO summit, we denounce the role of European governments that accompany this logic and that not only bow to the interests of the oligarchy but are willing to allocate public resources to finance them by increasing military spending to 2% of GDP. Governments invest in weapons, surveillance technologies and borders, while inequalities deepen and the precariousness of life becomes generalized.

As an international feminist movement, we denounce the media attempts to hide and normalize conflicts and wars in territories of the global south, territories that systematically suffer militarization and wars, where it is evident the advance of conflicts for the grabbing of land and nature.

In this world of wars in which capital attacks life, the World March of Women is committed to a political agenda in which the sustainability of life is at the center. Our struggle is for the decommodification and expansion of public services to support social reproduction, for food sovereignty and for structural changes in the current model of re-production and consumption, oriented by the recognition of our interdependence and eco-dependence.

Peace and demilitarization are foundational commitments in the construction of the World March of Women, as well as our internationalist solidarity and tireless struggle for the sovereignty and self-determination of peoples as a condition for overcoming racist and heteropatriarchal capitalism.

We call on women around the world to strengthen and broaden the struggle for peace and demilitarization, to confront imperialism and build the conditions for a world in which the sustainability of life is at the center.

We resist to live, we march to transform.