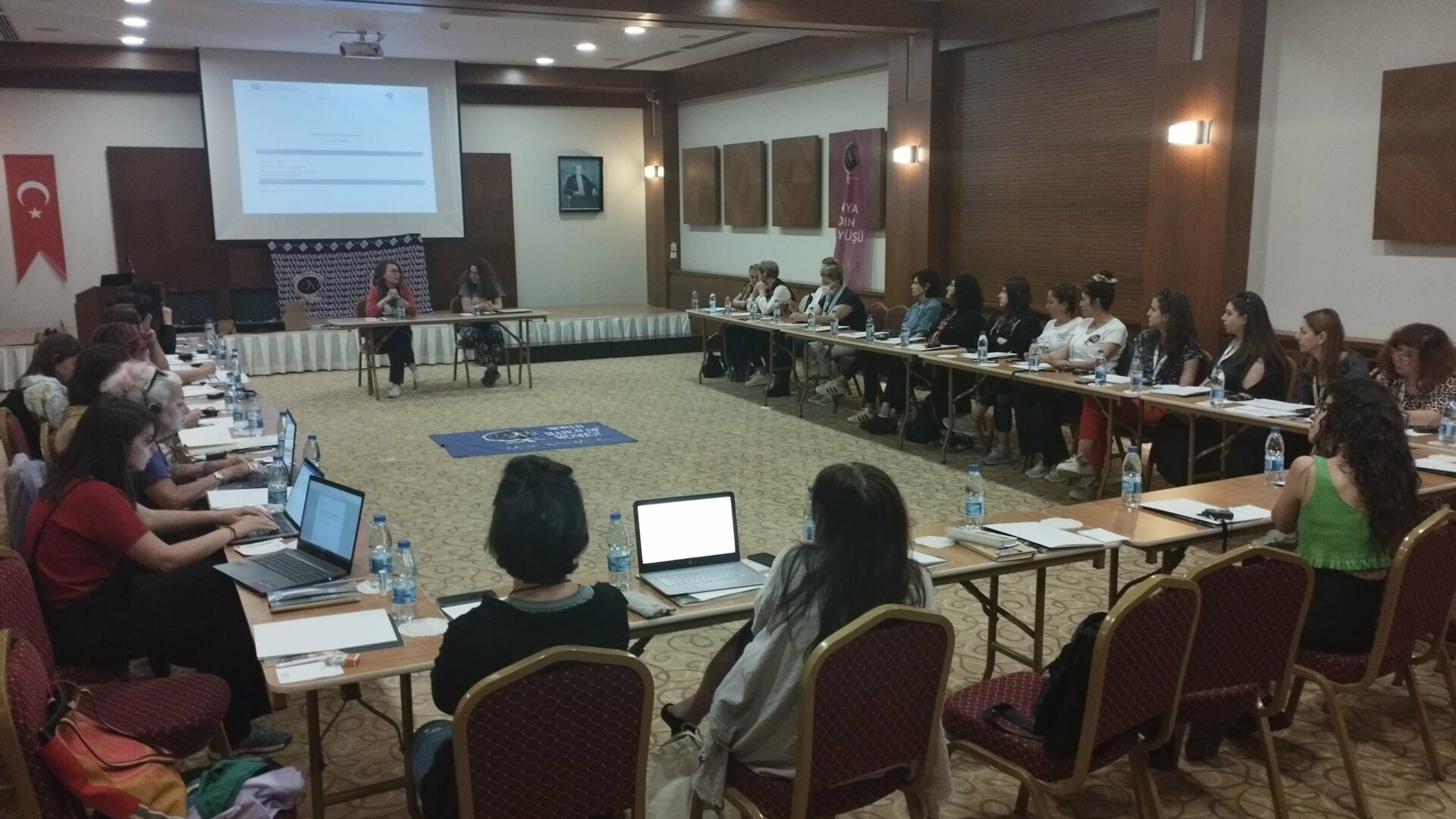 In the last May 14, the Turkish NCB started with the Balkan Feminist Organizing School began with the participation of sisters from Bulgaria, Macedonia, Bosnia and Herzegovina, Albania, Romania, Armenia, Georgia, and Turkey.

The school aims to start a process of articulation and organization of women in the region.

About 35 women will be gathered for three days to know women’s organizations and share the struggles and alternatives that women have developed in their territories.

The training began with a greeting from Yıldız Temürtürkan, the international coordinator of the WMW, who introduced the World March of Women to the participants. “The new WMW international secretariat is in Turkey. With this challenge, we understand it as strategic for the feminist movement to connect with women’s struggles in Turkey and the Caucasus, Balkan, and Mediterranean regions”, said Yıldız.

Also, Zeynep Alica, from the National Coordination of Turkey, shared the experiences gained last year during the IFOS – International Feminist Organization School Berta Cáceres, launched on March 4, 2021, and which gathered almost 200 women from different parts of the world.

The school itself is a process that moves forward in grassroots feminism organizing. It was built by four movements and organizations — Grassroots Global Justice, Grassroots International, Indigenous Environmental Network, and the World March of Women — and represents a process of political syntheses articulated with grassroots education methodologies, aiming to contribute to educating militants who are also educators and organizers of grassroots feminism in their countries and territories.

During three days, the women will discuss the themes: Systems of Oppression, Feminist Economy for building food sovereignty and climate justice, and Feminist and Popular Communication as a strategy for the democratization of communication and movement building.

Identifying the challenges and commonalities for understanding patriarchy as a system of racism, conservatism, and fundamentalism in the region

Conservative groups insist on trying to abolish the Istanbul convention as a way to increase control over bodies. Women and LGBT+ people are constantly attacked by conservatism, access to sex education in schools is denied, and sexual and reproductive rights are constantly attacked. We face obstacles to our right to abortion; they try to use existing laws in some regions as an example. Also, forced and early marriage is another form of violence against children, another way to control women’s lives, and another form of domestic violence.

The militarization and carpeting of territories are driven by national public budgets that allocate a significant amount of money to the war industry instead of public investments in education and health, for example. Women also denounced neoliberalism and fascism as tools to put profit above life, highlighting the worsening conflict between capital and life. The defense of the State is urgent against the neoliberal offensive.

In this sense, racism, xenophobia, and migration become more and more frequent, situations in which people in positions of migration and refuge are placed in precarious jobs, and women and girls suffer even more from sexual and economic violence. One example cited is Ukrainian women who do not have access to abortion when they suffer violence and seek help in other countries, such as Poland. Women in Turkey also emphasized the growth of fundamentalist religious movements that use institutional avenues to attack women’s lives.

The participants also reflect about Climate justice and food sovereignty with Maja Bajic from Friends of the Earth Bosnia and Marika Kapanadze from Elkana, an organization that is part of the Via Campesina and works to strengthen the production of family farmers in the country.

Aleksandra Radevksa and Natasha Dokovska, shared their experiences as journalists and provoked reflection on the importance of defending press freedom and possibilities to think about the relationship of our movements with the media to face the dispute of narratives. They also presented tips on how to further integrate women’s experiences through Capire, the feminist and popular international communication portal coordinated by the MMM.

Tica Moreno and Natália Blanco, from MMM Brazil, also shared the experiences of the collective of communicators of the march in the country and also of the Capire portal, pointing out our feminist communication as a political bet to break with digital capitalism and its traps.

Grassroots women, both in the region and around the world, have been framing anti-systemic feminism from digital platforms to ideologically contest the public debate, point out our alternatives and make our resistances visible. However, they also signal that it is necessary to make critical use of them since they operate under the same logic of exploitation and accumulation of information.

Putting life at the center implies reorganizing life, redistributing the work of production and social reproduction in a relationship of inter-and codependence with nature. To establish economic and social relations based on solidarity, equality, internationalism, and alliances among the many movements of resistance worldwide. This is putting the sustainability of life at the center.

The process initiated during these days will continue through virtual meetings to continue articulating the women’s organizations in the region and collectively building feminist formation to transform the world.