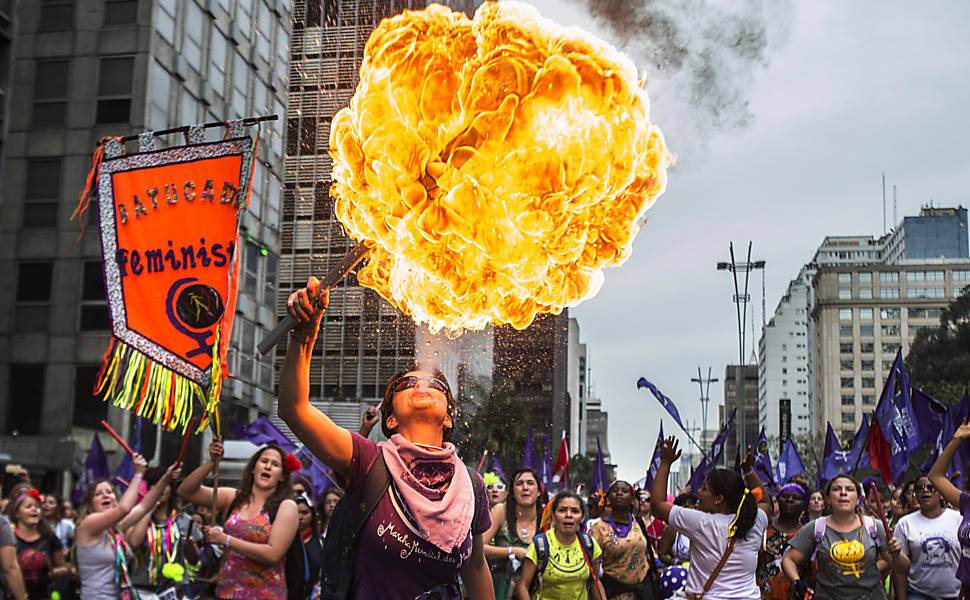 “Resistance and movement building: confronting neoliberalism from feminist economics and common goods” was the topic of the international seminar organized by the World March of Women (WMW) on July 17-19 in São Paulo. The encounter brought together close to 30 feminist militants from more than 15 countries in the Americas, Europe, Africa, Asia, and the Middle East. In this text we are sharing some elements of the collective reflection we had during those days.

Neoliberalism, conservatism and the rise of far right

The reflection about the current world order came from the contributions of our sisters from Philippines, Turkey, Brazil, and United States. Among the common elements, antifeminism appears centrally in the construction of the new regimes of the neoliberal order that is imposing governments based on the oppression of poor people, and that considers feminist struggles against violence and exploitation to be threats. One of the tools used by the system is the war against drugs that is killing poor people in Philippines and other parts of the world. Neoliberalism is an authoritarian project that targets the poorest of the poor and has been made even more acute with the rise of the extreme right. We cannot lose sight of the radical perspectives of feminism, while the defense of democracy cannot be disassociated from the struggles towards a transformation of the economic and social model.

Even though the current political moment has features that are, in fact, new, many of the contradictions that are becoming evident for society as a whole are, in reality, intrinsic features of a hetero-patriarchal and racist capitalism. Extractivism, construction megaprojects, cuts in education and health, the privatization of the commons and the State, as well as climate change are all concrete manifestations of the predatory logic used by neoliberalism.

The agenda represented by extreme right-wing presidents such as Donald Trump in United States, has old and deep roots in the countries’ histories, many of which were built on the genocide of Indigenous Peoples and slavery. The militarization of life, the control mechanisms, the imprisonment of black people, the criminalization of movements, xenophobia, and the monopolization of the media are all elements feeding racist, patriarchal, and capitalist ideologies. They also legitimize daily the terrorism based on those ideologies used by the system. In different territories, militarization is closely connected to transnational companies that use the repressive apparatus of the State to defend their corporate interests. Women are protagonists of the resistance to militarization. The strategy of constructing popular power is key for this resistance.

In several countries, this is a moment marked by deep historical defeats of the working class. In the Latino American reality, the rise of the right wing has to be discussed considering the region’s position in international geopolitics and the accumulation of capital. The rise of the extreme right has to do with a prolonged crisis since 2008, with the reaffirmation of US hegemony, and the new features of neoliberalism, which, in other moments, has defended democracy and, today, simply disregards it. It is necessary to advance in the construction of common, popular visions of what democracy means based on the values of justice, equality, freedom and popular power, as these are central for its defense in this moment.

The assaults on the State as guarantor of rights, and the strengthening of its repressive apparatus live side-by-side with a dangerous discourse on representativity that makes some women feel part of the system that produces profit and hopelessness. It is necessary to consider the abnormality of this current moment. Forging an apparent democratic normalcy presents false dilemmas to us and, above all, false solutions. We cannot be in spaces of power without a process of construction of popular power, and a permanent organizing and mobilization.

In the face of a complex reality, filled with assaults and threats, we have the challenge of building a common vision regarding the types of struggles and confrontations needed to change the model. We are not beginning from zero: we have accumulated visions and proposals built from the collective struggle by organized actors, such as the World March of Women, Vía Campesina, and Amigos de la Tierra Internacional.

It is necessary to point to how the system has become concrete, to the assaults against life promoted by megaprojects and agribusinesses, and to the militarization of bodies and territories. The collective responses to this reality have to also be concrete. Food sovereignty and feminist economics were presented and discussed as proposals for resisting.

It is upon the basis of feminist economics that we should build a critique of the economic crisis, caused by the way the capitalist system works. In this system, the commons and women’s work are seen as unending sources of exploitation. Breaking away from this system means to break away from the sexual division of labor, as well as from the hierarchies that exist between production and social reproduction.

A feminist economy is a political goal as well as a theoretical position; it is a tool for the construction of imaginaries for the new society we want to build, inasmuch as it is the basis of the practices undertaken by women in this construction. By putting life and sustainability at the center of the debate and political actions, feminist economics places us in a different position, one that is necessarily anticapitalist and one that is affirming of the interdependence between people and of our relationship of ecodependency with nature.

Permanent organizing processes are crucial for resistance. The diversity of experiences, and of women that are part of feminist anti-systemic organizations, have to be our strength and not a source of fragmentation. These organizations are the ones with the capacity of making a comprehensive critique of the racist and patriarchal capitalist system, and of making the defense of life as the central issue.

The defense of the common goods is a tool for confronting the process of commodification and emptying of politics. The common goods are nature, our feminist communication, the counterhegemonic struggles, self-organizing, and our popular spaces. The common goods, therefore, are some of the basic tenets for our organizing, which needs to fulfill its necessary role given the assaults by capitalism.

There are many accumulated visions and proposals, lessons learned and challenges that the construction of resistances and alternatives in the different territories contribute to popular struggles. It is important to confront capitalism, at the same time that we build a project for the society we want to live in. In this sense, it is necessary to advance the alternatives that live side-by-side with this system, towards an emancipatory project that is incompatible with the logic of capital.

Concrete experiences of resistance, in which women have a protagonist role, contribute to the reflection. In Kurdish women’s resistance, collective questioning about politics is part of the quotidian construction women make in a process that has the community, not nationality, as the basis for social organizing. In the resistance of quotidian violence, as well as of colonial and patriarchal violence, communities of self-organized women have been built in Kenya as an alternative for survival and the enjoyment of a life without violence. The articulation of these experiences with the feminist struggle that is resisting capitalism makes concrete what a feminist economy looks like at the local level; and this is bolstered in the World March of Women. Indigenous women’s resistance is organized from visions that are in conflict with Western logics and visions. Defending and protecting land and water is something very serious and important because it makes visible the relation of dependency among people and nature, and, of course, the responsibility of taking care of the commons…something that is quite the opposite of what the capitalist system does, which calculates, trivializes, and destroys the commons. One of the struggles of Indigenous women in United States is against the disappearance and killing of women that accompanies the violation and spoliation of lands and territories by the so-called “progress” of capitalism.

The force of these experiences of construction of resistance and popular and feminist self-organizing inspires the debates. The experiences also contribute to the construction of the political imaginary of the world we want to live in, and to elucidate the challenges and contradictions that we find in the path of its construction. The collective discussion has affirmed the centrality of carrying out struggles that resist capitalism’s racist and patriarchal violence and exploitation and that, at the same time, build societies based on equality, justice and solidarity.

Women are the main force of resistance and confrontation to the rise of the extreme right in different parts of the world. The challenge is to amplify permanent organizing.

The perception of the tendency towards the commodification and instrumentalization of feminism is a common one, with a fragmented appropriation of slogans that depoliticizes the contents. This is perceptible in the actions of the big transnational companies that paint a rosy picture regarding their role in the exploitation of labor and the accumulation of territories—a strategy that is also present in the field of environmental struggles—and in the way the United Nations (UN) has reformatted gender discourses and the defense of women’s rights.

The feminism that we want and are building is something that changes women’s lives to transform the world, and changes the world to transform women’s lives, all in one movement. At its center, this feminism has a deep commitment with the transformation of society, and with the struggle to end capitalism, patriarchy, and racism, because we understand that those exploitative systems are the basis of the oppressions we experience. It is not enough to be represented in this society. We want a whole new society. In order to build it, we need to accumulate lessons learned and experiences, as well as participate in the organizing of the present time. In this sense, it is necessary to build political and organizing synthesis that consider the different political generations found in feminism. We are betting on women’s self-organizing as political actors, and on the process of reorganizing economic relations and, therefore, on the life at the local level. For this reason, the challenge is a permanent organizing that goes beyond dates for big mobilizations.

Feminism is a social movement, a political process of a collective actor. Class is a central dimension in this movement, as well as the recognition that working women, peasant women, negras, quilombolas, and Indigenous women have been collective actors, capable of big mobilizations and quotidian confrontations with the racist and patriarchal capitalism. A challenge—that is also resistance—is not allowing for those struggles to be erased and hidden from the present, as they have been throughout history.

The syntheses and convergences in the creation of a feminist economy as a project, and as a strategy for the struggle, as well as in the construction of popular strength for transforming power structures and the foundations that support life, form the path we need to go through for the strategic edification of the movement. Key in this is the construction of solidarity beyond borders, a quotidian internationalism that articulates local struggles to international struggles; as well as the forceful confrontation of logic of the racist and patriarchal capitalism that is attacking life. All of these discussions are part of the reflection of the World March of Women as it prepares towards the 5thInternational Action of the movement that will take place in 2020 under the slogan of “We resist to live, we march to transform”.