Palestine Land Day – for the right to self determination 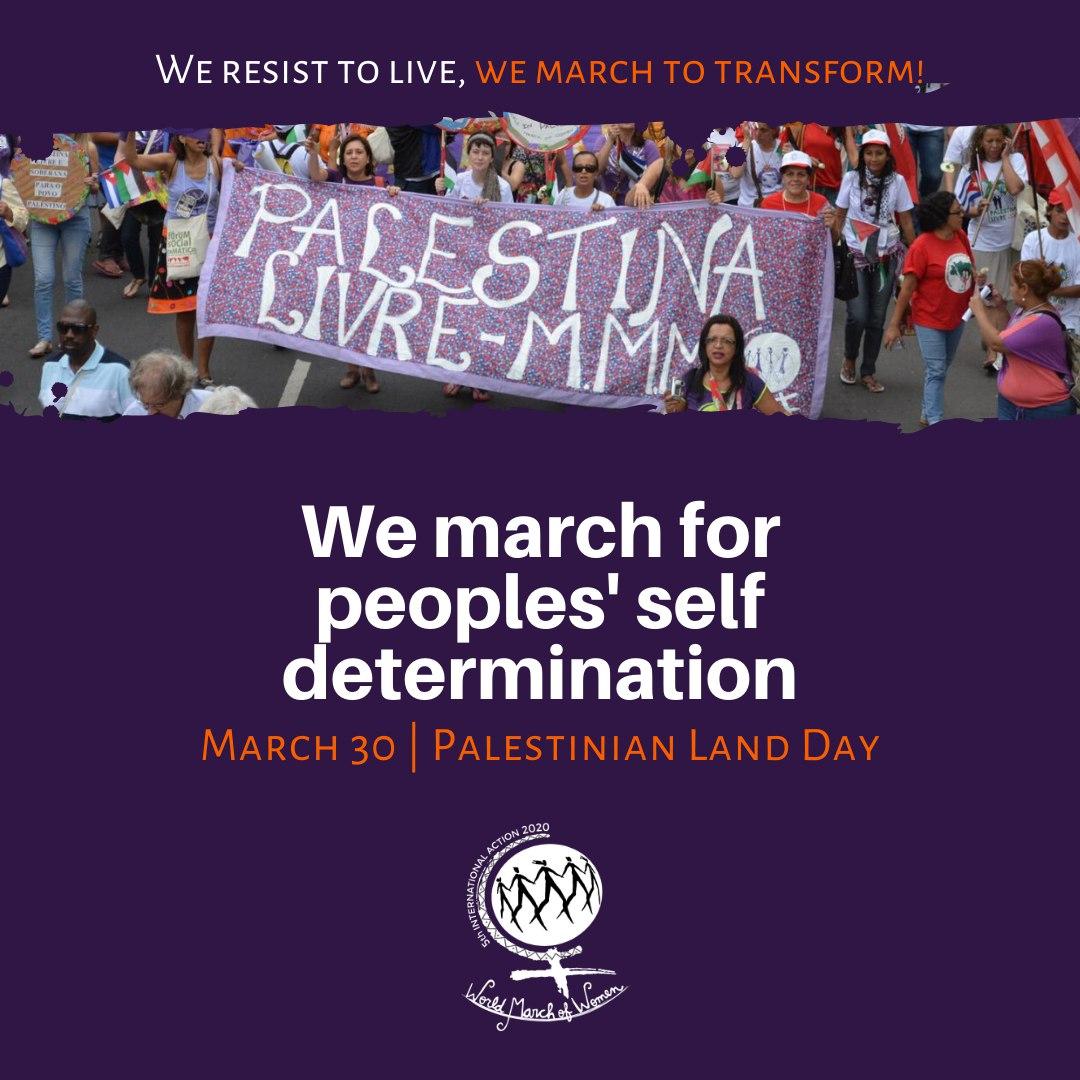 On March 30, 1976, the Israeli army attacked demonstrators in the midst of a strike organized by Palestinians n Galilee in the face of another advance of illegal Israeli settlements on Palestinian territory. Six people were killed, hundreds wounded . Since then this is Palestinian Land Day — the day when Palestinians celebrate this event in the long struggle for their lands and against Israeli occupation. It is the day we have chosen, in the calendar of the 5th International Action of the World March of Women, to demonstrate our solidarity and give visibility to the struggles of women in their territories for the right to self-determination.

Today, women from MMM in dozens of countries will express their solidarity and support for this struggle. Here we publish two texts written by members of our International Committee. Ruba Odeh, from the Middle East and North Africa region, writes to us from occupied Palestine. And Vania Martins, from Portugal, sends us a reflection on the right to self-determination.

We march in internationalist solidarity with women who resist segregation, sieges, militarization, surveillance and political persecution. We resist the embargoes and imperialist sanctions and we march for the right of the peoples to their own voice and to decide their future in peace and democracy.

March 30th is the Day of the Palestinian Land and the date we set in the calendar of the 5th International Action of the World March of Women to give visibility to the struggle of peoples for their right to self-determination. This day comes in light of the challenges that humankind faces in the face of the coronavirus pandemic, in which the colonial policies and the neo-liberal regimes beguin to collapse due to their brutal socio-economic policies. This crisis reveals the fragility of health systems and the lack of social protection in light of the militarization of the world and the generalization of the consumer system centered in the interests of transnational corporations and imperialist states.

On this day, Palestine is in a state of compulsory quarantine. The Zionist occupation still controls and closure the Gaza Strip, which faces the possibility of a pandemic with almost no resources, which would compound the crisis.

The Palestinian Land Day comes this year after the US administration announced its joint plan with the occupation, which is called the “Deal of the Century”. This deal confirms the denial of the national rights of the Palestinian people, and it works to steal and annex large parts of West Bank lands, especially the Jordan Valley. The colonies legislate on the ground and seek to annex them to the occupying power, which means further isolation of the Palestinian people. There are clear ethnic cleansing policies in Jerusalem and the prevention of any Palestinian activity therein, within a clear and declared plan to Judaism Jerusalem and deny its Palestinian identity.

Solidarity with Palestine on Land Day should focus on slogans:

We are certainly aware of the conditions that women around the world live in during this pandemic. Solidarity activities must be in a manner that guarantees safety for all of us.

Self determination is a collective and solidarity right

By Vania Martins, International Committee of World March of Women

On the 30th of March we mark the Palestinian Land day, an historic event that took place in 1976 where Palestinians resisted as a collective to the Zionist occupation, reclaiming their land and the right to self determination.

The right to self determination is considered a fundamental human right and and is broadly recognized as the right of peoples to determine the various elements of their governance; however, this human rights perspective has enabled a narrow view of self determination as a civil liberty and is deeply based on the achievement of statedhood and state sovereignty. There is a need to move beyond this narrative, that is deeply linked to ethnicity and historical sovereignty and will only allow to reproduce patriarchal structures and relations of power as well as limited political representation and access to resources ; and focus on the rights of communities instead.

Self determination needs to be redefined as a collective and solidarity right that encompasses within the right to have a political voice and influence the economic and social processes under which a collective group lives. It is a right that belongs to all peoples, not only to nation-states. Such right can only be accomplished by considering the situation of women and their social, political and economic status and address the multi-layered types of violence women often experience when fighting for self-determination.

We, women of the world march, denounce the relationship between the struggle for self determination and the violence experienced by women and communities by a militarized neo liberal model. The deployment of the military to reinforce state sovereignty and territorial integrity in its various forms – being it an environment of “armed peace” in Catalonia or ethnic cleaning in the Kurdish territories – criminalises the right to resist and continues to use women’s bodies to reassert it’s power. It also creates specific types of violence against women such as the imposition of borders separating communities; forced territorial displacement; spiritual and/or religious violence such as the imposition of dominant religions or the destruction of places considered sacred and the grabbing of land that original populations consider sacred; in addition to, in many cases, check points to restrict freedom of movement.

Along with these human rights violations and the ethnic cleansing, this racist and imperialist model also grabs and destroys peoples land and prevents access to their resources. In many cases, the military and governments are at the service of transnational corporations with economic interests in these lands, profiting from a patriarchal capitalist system where women are always targeted.

In Palestina, the brutal colonial Israel apartheid, aided by the imperialist policies of United States of America, continues to deploy the army against the Palestinian people whilst imposing a blockade to Gaza strip, creating an unprecedented humanitarian crisis, aggravated by the current worldwide pandemic crises. It also continues its campaign against the BDS (Boycott, Divestment and Sanctions) movement, classing it as anti-Semitism, and the harassment, surveillance and persecution of its activists.

In Western Sahara, the criminal neoliberal Kingdom of Morocco, expands its exploitation of Saharan resources in a shameful deal with the European Union, facilitated by the former colonial power of the Spanish state, whilst Saharawi people are forced to live under violent occupation or to escape to the refugee camps in the desert of Algeria.

In kurdistan, the expansionist Turkish regime continues its project of ethnic cleansing and land grabbing, aided by the political persecution of Kurdish people in Iraq and Iran and worsened by the Syrian civil war; whilst the West continues to classify Kurdish people resisting as terrorists and allowing its continuous persecution and surveillance.

In west Papua, the Indonesian state continues its policy of forced impoverishment of the communities whilst exploiting their resources, and imposing racist policies to promote the marginalization of indigenous people whilst encouraging the migration of Indonesians to West Papua, creating conflicts and competition over land.

In the colonial Spanish state, Basque Country, Catalonia and Galicia are constantly prevented by the government to decide peacefully and democratically about their future, and both army and police forces have been used against civilians and for the surveillance of its population.

We also denounce the neoliberal, imperialist and capitalist tools as blockades and sanctions used against the sovereignty of peoples and their right to build their own political processes such as Venezuela, Cuba, Mali, Yemen, Lybia or Iran that impoverishes the population and endangers the survival of their societies, particularly with the current health and social crisis created by the Covid-19.

We demand the end of sanctions, blockades and occupation and ask for mobilization against this capitalist, imperialist and racist neoliberal model and solidarity for the people resisting across the world, fighting against subjugation and for their freedom.

We will keep marching until all women are free!