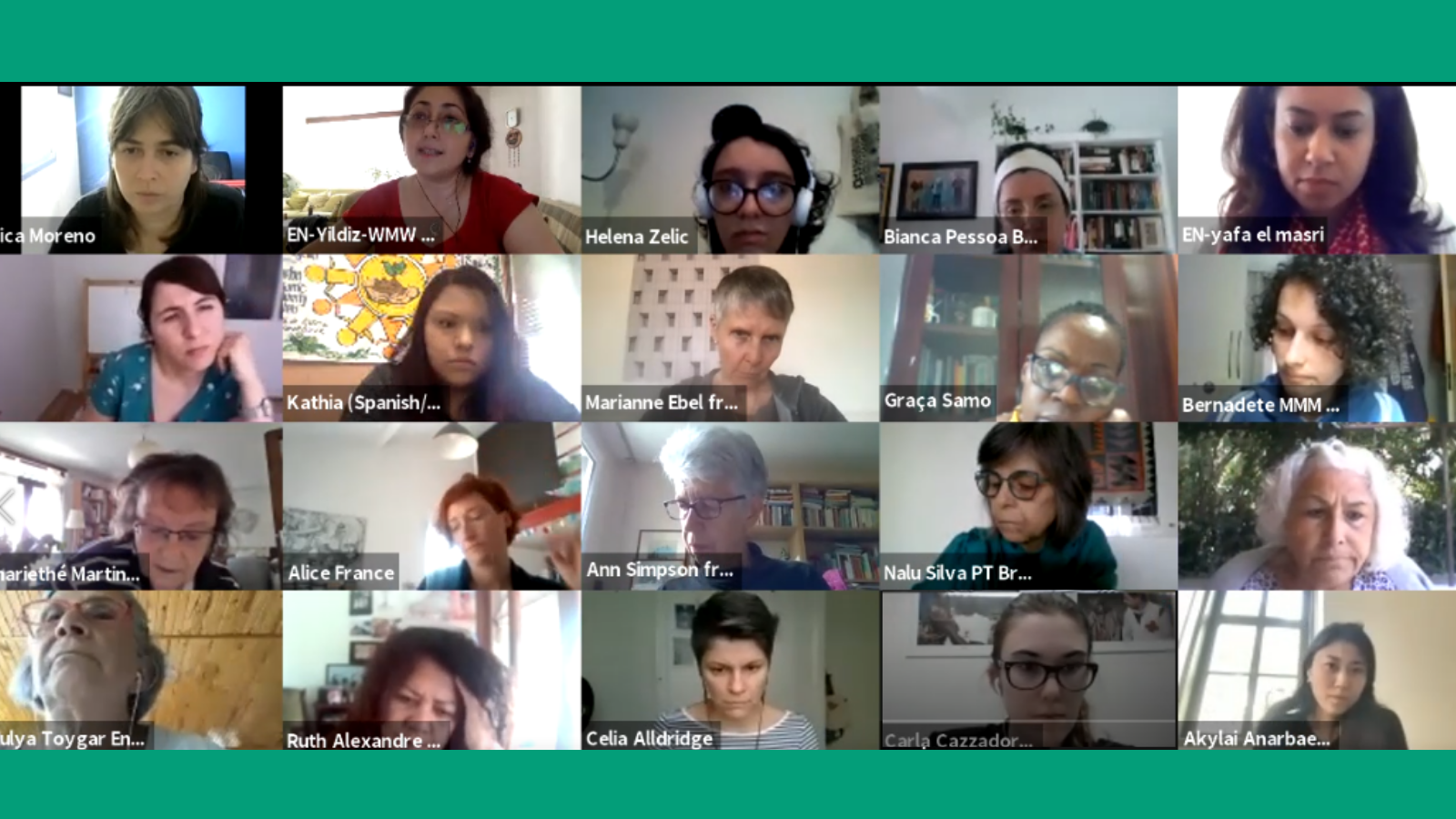 On May 4, the World March of Women and the Capire portal organized another webinar to debate aspects of the conjuncture of women’s lives around the world.  The theme this time was “Migrations and refuge in the feminist agenda”. The webinars have been tools to connect the militants of the WMW and other allied organizations around our different realities.

The initial interventions were from Yafa El Masri, PhD candidate in human geography, Palestinian refugee in Lebanon, Kathia Ramirez, indigenous Zapotec from Mexico, member of the Farmworkers’ Support Committee (CATA) in the United States, and Marianne Ebel, WMW activist in Switzerland, member of Droit de Rester/Neuchâtel and Toutes Aux Frontières/Europe. They brought an overview of the dynamics of migration and its relation to the precarization of life and work for women and people of color in their territories.

Yafa presented the situation of immigrations and refuges of Palestinians, Syrians and other peoples in Lebanon, and exposed how the Kafala system denies immigrant women access to autonomy and labor rights. Kathia Ramirez shared about the popular struggles of the migrant and farming population in the US, pointing out how the idea of the “American dream” is false, since people who migrate suffer from lack of social security, racism, and inequalities. And Marianne Ebel, told about aspects of the migration and refugee situation in Switzerland, the precarious work, xenophobia towards non-European migrants, and the debate that the World March of Women has been having for over 20 years.

– Read the contributions in full on the Capire portal

In addition to the initial contributions of the companions, the webinar was also a powerful space for sharing the analysis and policy proposals of the WMW in various countries.  The experiences reveal the systemic character of the dynamics of migration around the world, and its relationship to the capitalist, heteropatriarchal, colonial, racist and lgbtphobic model under which we live.  Migrations are related to the social, racial, sexual, and international division of labor makes lives more precarious, and because colonialism is actualized by the power of transnational corporations, by extractive exploitation, militarization, and war. In addition to understanding the causes of the increase in migration today, we also reflect on the challenges and obstacles that migrants and refugees face in the territories of destination, also marked by violence, criminalization, and precariousness.

When we talk about migration and refuge, we are talking about people who are already in social, physical, economic, psychological fragility even before they make the decision to leave their place.

It is as if she were a migrant within her country, she already lives conflicts and structural problems that make her look for a better place, of opportunities, an “El Dorado” that makes her an easy target for opportunistic people in this predatory system,” as Graça Samo, coordinator of the WMW International Secretariat, said.

Another issue raised by the debate was the increase in xenophobia in countries that receive migrant populations, countries that often also have structural problems similar to the countries of the migrants. Xenophobia is encouraged by right-wing nationalisms and causes hostility even by the popular layers of society, because there is a system that pushes them towards vulnerabilities and scarcity, such as the dispute for jobs and housing, as has happened in South African countries.

For Graça Samo, we need to understand the issue of migrations to understand how to deal with cultural diversity and its influences in our territories. She gave the example of the issue of genital mutilation in Mozambique. “We didn’t deal with this debate until recently, but today it is a reality in our communities, which many times our public and political organizations don’t know how to deal with or face.

The violence is multiple, both for those who manage to stay in the country of arrival and for those who suffer deportations.  Many people are forcibly removed from the country to which they migrated, and every deportation means an abrupt separation from a family or community. Unlawful status makes people targets for the state, as Kitzia Esteva of the Grassroots Global Justice (GGJ) organization that is part of WMW in the US exemplified:

An officer searches for you at work, at your home; you are arrested without having a lawyer; you are often for months, often without access to your family and lawyers because immigration lawyers are expensive and free legal services from NGOs are limited; then a judge &apos;hears&apos; your case and you are declared “deportable”; put on a plane and sent back to your country of origin, often under conditions of violence or social/economic or climate emergency.”

“Women who migrate face violence, including sexual violence. This occurs in the circuits and paths of migration, in repression and criminalization, and also in the networks of international human trafficking for prostitution. Nzira de Deus, from WMW Mozambique denounced that this is a hidden dimension also in contexts of conflict, as in Cabo Delgado, where rape is used as a weapon of war. Congo, Angola, and Uganda were also mentioned as countries that suffer with the intense migratory flux in their borders.

Nalu Faria, from the International Committee of the WMW and member of executive coordination of the WMW Brazil, analyzed how the dynamics of migration are linked to the expulsion of populations from their territories, their way of life, the expropriation of the means of living, and the growing wave of fear that plagues populations, especially in Latin America. In the region, fear and the capitalist economic system go together.

We have the right to migrate, to come and go, because we are citizens of the world, because we believe in a world without borders. But we also have the right not to migrate. We are seeing that the conditions in our territories force us to migrate. So we are fighting for a model where the sustainability of life is at the center, where everyone has a life worth living.”

In the pandemic, the sharpening of the capital-life conflict has been exposed. In this context, Souad Mahmoud, from the World March of Women in Tunisia, said that we are subjugated to those who choose who should live or die. She also pointed out how the migrant population suffers from illegality and, now, from the lack of access to vaccination due to State policies aligned with the interests of transnational pharmaceutical companies, the elites, and capital.

In this sense, our feminist and international solidarity has never been more important to mobilize the struggle for the right to cure and vaccination in a way free from the control of pharmaceutical companies over patents.

The webinar contributed to build elements of common analysis from different realities and, especially, to point out our perspective of feminist struggle around migrations and refuge. The companions highlighted internationalist solidarity among the peoples of the countries that receive migrants; the construction and strengthening of popular self-organization wherever we are and the construction of identities as political subjects, including among migrant peoples as strategies. “This constitution of the political subject needs to be integrated with other forms of organization in these territories, in the search for unity to have strength and dismantle the model as it is today,” said Nalu Faria.

The World March of Women has the challenge of articulating an agenda that connects the issue of migrations to the set of our demands, responding to our constant challenge of looking at the local and thematic dimensions linked to our global response, to our resistances and alternatives to put the sustainability of life at the center.