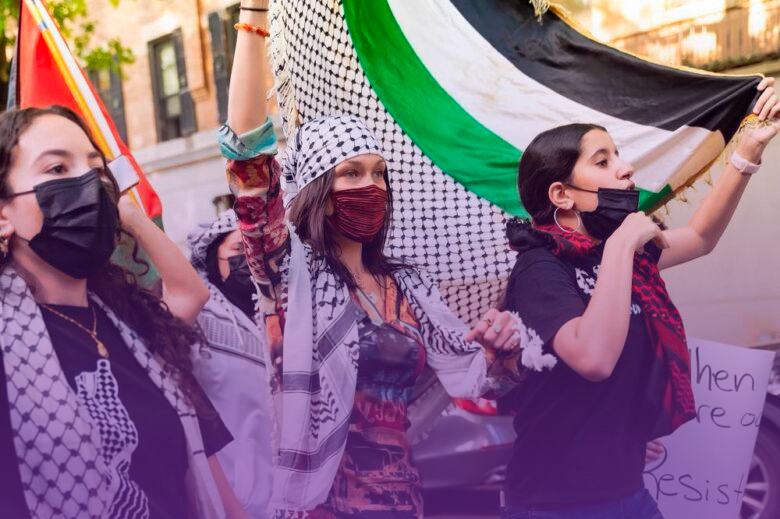 We, the undersigned, stand in firm internationalist solidarity with Palestinian Civil Society and demand the Israeli Ministry of Defense and Israel Defense Forces (IDF) reverse their recent decrees against six of the most important rights-based organisations in occupied Palestine.

The Israeli government’s recent steps to criminalise and attempt to silence these six organisations is a dangerous escalation of a trend that we see taking place worldwide, targeting human rights organisations and particularly those organisations defending land, water, territories, and the earth.
For decades, the Israeli occupation has denied Palestinians access and control over their own lands, waters, territories and commons. The occupation is a source of profound human and environmental rights violations against the Palestinian people, including pollution, destruction of livelihoods, land and water grabbing, discriminatory planning laws, forced evictions and displacements, military violence, torture, and destruction of human lives.

Frontline Defenders exposed findings that indicated that six Palestinian human rights defenders, including those from the NGOs designated as terrorist organisations, were hacked with Pegasus, spyware developed by the cyber-surveillance company NSO Group. The spyware was active in 2020 and 2021, prior to the designation status, and indicates another failure of NSO’s company policies on human rights and the ability or will of the Israeli government to impose human rights regulations on companies, which deeply impact the violation of rights of Palestinians organising and advocating for human rights.

This unfair and unfounded measure has been widely criticised by Civil Society
Organisations the world over [SEE BELOW]. Advocates of peace, justice and human rights across the globe are demanding Israel reverse its illegal and draconian decision. UN High Commissioner for Human Rights, Michelle Bachelet said in a recent statement:

“The banning of organisations must not be used to suppress or deny the right to freedom of association, or to quash political dissent, silence unpopular views or limit the peaceful activities of civil society. The national authorities responsible for proscribing organisations must comply fully with the State’s international human rights obligations, including by respecting the principles of legal certainty, proportionality, equality and non-discrimination.” The Union of Agricultural Work Committees (UAWC) is the largest agricultural institution in Palestine and was established in 1986 to improve the situation of Palestinian farmers and fisherfolk. UAWC received the prestigious Equator Prize in 2014 by the United Nations Development Agency for its outstanding work on sustainable agriculture and preservation of local seeds through its seed bank. In the West Bank, UAWC’s work focuses mainly in ‘Area C,’ rural areas which Israel has explicit goals to annex and where Israel has been accelerating its process of expanding illegal settlements. It is worth noting that a week after Gantz’s declaration, Israel announced plans to build 3,144 new illegal settlement homes in the West
Bank.

The work of UAWC, as well as the other five organisations being accused is key in the construction of a just, fair, sustainable world, free of all systems of oppression, including patriarchy, colonialism, racism and classism.

We, as social movements and civil society organisations, join in with hundreds of other organisations across the globe who have stood up to denounce this injustice.
We call on the international community, especially the UN Human Rights Council, US government, Members of the European Parliament, and European Governments to:

● Denounce all smear campaigns against Palestinian civil society
organisations, press the Israeli government to immediately and fully
rescind its designation of so-called “terrorist organisation” against
these six Palestinian human rights groups; and

● Use their diplomatic means to hold the Israeli government accountable
to adhere to international law and human rights standards and put a
permanent end to the occupation of Palestinian lands by Israel, a state
which violates international law daily in the absence of any form of
accountability.

We would like to invite you all to mobilise together on November 29th,
International Day of Solidarity with the Palestinian People, to denounce this
alarming criminalisation of Palestinian CSOs that resist an inhumane occupation policy and to support the Palestinian population to survive in these dramatic circumstances.

You can act by joining the following actions:

● Ask your government to speak out against this violence and demand an end to Israel’s appalling injustices.
● Share pictures and videos with messages of solidarity and demands for
governments widely on social media. TOOL KIT
We stand firmly in internationalist solidarity with the six Palestinian NGOs and the Palestinian peoples and call for a permanent end to the occupation of Palestinian lands and an end to this outrageous violence and criminalisation.