March 8 2022: The World March of Women begins its year-long journey of struggles around the world 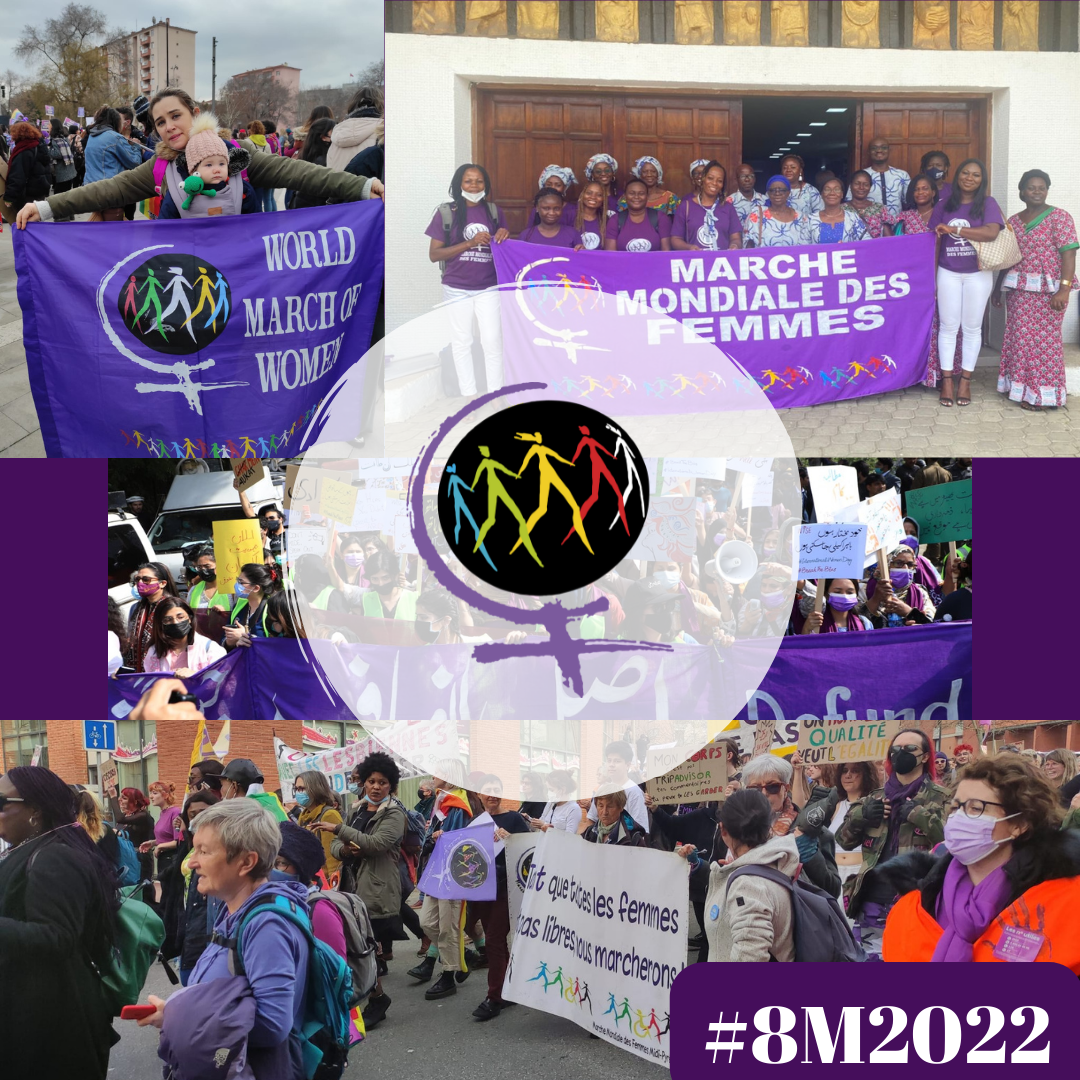 As every year on March 8th, International Women’s Struggle Day, we take to the streets and networks all over the world with our rebellion, hope and feminist dreams to defend the lives of women, peoples and nature, for equality, freedom and justice and to demand the transformation of the world through popular, anti-racist and anti-capitalist feminism.

In the feminist communication portal Capire it is possible to check a rescue about the revolutionary history of this very important date for us. In addition, we have added to the messages of women who organize feminism in their territories and regions of the world in a video:

In the international declaration this year we once again denounced the advance of capital over women’s lives; the weapons and strategies of colinialism, fascism and imperialism, such as NATO, to promote wars and destabilize so many countries; the poverty and violence of neoliberal racist patriarchy; the financialization of nature and common goods and the impact of transnational corporations on the entire planet.

In this sense, we went to the streets for our lives, bodies, and territories!

Below we have gathered some records of WMW activities around the world on March 8, 2022.

Let’s resist together, let’s march together.

In Ivory Coast, MMF activists held a seminar for the International Day of Women’s Struggle with the presence of government leaders.

In the Tanzania activity the women discussed how to connect grassroots women to technology, i.e. ICT, and how to address violence such as cybercrime, the impacts of the “new normal,” and autonomy over the many tools. In addition, Sophy Ngalapi, member of the WMW International Committee for the Africa region speaking on the radio about the history of the women’s movement in Zanzibar, Tanzania, especially in political participation and the democratic process.

There was also a three-day political training in Morogoro, Tanzania with the sub-regional coordination team comprising countries such as Uganda, Western Sahara, Zambia, Mozambique, South Africa, Sudan, Zimbabwe and Kenya. Due to unexpected factors it was only possible to gather representatives from Tanzania, Kenya and Zimbabwe. The occasion was also held for the new IC team to meet and get to know the coordination.

In Kenya, the women held moments of debate about access to justice and land rights, and how to confront the violence of patriarchy that most often prevents women from having free access to land.

In Chile, the World March of Women, together with the feminist movement, led the “Huelga Feminista” with a caravan of activists from the rural area of Petorca to the urban capital, Santiago. This ended with a demonstration in front of the Ministry of Agriculture. See some videos on the WMW Chile Facebook page

The Women of the Cuban Chapter of the World March of Women held a meeting at the headquarters of the Cuban Women’s Federation. In addition, the women organized the virtual event “Solidarity with Sarawi women”. Jira Bulahi, Minister of Health and Jadiyeto Mojtar, Sahrawi delegate in Madrid, and Fatha Mouassa, National Secretary of the National Union of Algerian Women (UNFA) Algeria, highlighted the courage of Sahrawi women and solidarity with these heroic women.
Yildiz Temurturkan, International Coordinator of WMW spoke in depth about WMW’s actions for solidarity and the just causes of Sahrawi women. During the meeting, Bathabile Dlamini, President of ANCWL South Africa, was present and an audiovisual presentation was shown highlighting the importance of continuing to support Sahrawi women in their struggle for full sovereignty. Radhi Jerbi, President of UNFT (Tunisia) also spoke in support of the causes of Sahrawi women.

The militants of the World March of Women took to the streets this March 8 in numerous cities in Brazil to reaffirm the fight for women’s lives. Together with other popular movements, trade unions and social organizations, we participated in unified acts with the slogan “For the Life of Women, Bolsonaro never again! For a Brazil without machismo, without racism and without hunger!”. On this International Day of Women’s Struggle, we inaugurated the year’s day of struggle for Bolsonaro Out, in view of the presidential elections in the country in October, making visible the role of feminism in building a country and a world without poverty, without capitalism and without violence.

We march against patriarchy, capitalism, racism and colonialism, for a life without violence! Coordination of the World March of Women of Quebec at the protest of the international day of women’s struggle. The future is feminist!

The WMW Macronorte – Peru took to the streets in the regions of Lambayeque, Cajamarca and Piura with the main banner of struggle of the Constituent Assembly. Because profound changes are built from below, in organization and with popular feminist education. We continue on the March until our bodies-territories-lands are free! Urgent Constituent Assembly!

In Venezuela, WMW activists also took to the streets in defense of autonomy and sovereignty over our bodies and territories. We marched against the violence and oppression of racist, patriarchal and neoliberal capitalism.

In the Philippines, this March 8, women call for progressive, pro-women governmentWomen’s groups such as the World March of Women of the Philippines called for leaders who will promote women’s rights, reject misogyny, as well as advance the successes and ongoing struggles of Filipino women, especially those in the basic sectors. The call was made with the May 9 national elections fast approaching. See videos of the action on WMW Philippines’ Facebook page

World March of Women of Pakistan represented by the Women In Struggle for Empowerment – WISE also took to the streets this March 8 in Lahore. Long live international feminist solidarity.

In New Caledonia, March 8, 2022 was the day to celebrate the 50th anniversary of the Association “SOURIANT VILLAGE MÉLANÉSIEN” at the Tjibaou Cultural Center. Le Souriant was the first association of Kanak women to act for the recognition of their culture and identity, which had been denied by the colonial administration. The date was an opportunity for them to take stock and draw up a plan of action for the next 50 years. Fara Caillard, decolonial feminist activist was representing the World March of Women. Under the leadership of Sonia Togna, President of the Union of Francophone Women of Oceania, and Armelle Wamytan, President of the Melanesian Village, the round table highlighted the inadequacy or even absence of a policy in favor of gender equality. Fara Caillard of WMW pointed to the institutional discrimination that tends to reduce or even exclude women’s rights in the decolonization process in New Caledonia. For this meeting, women came from the northern and southern islands of the country. Through song, dance, and poetry, they unanimously expressed their desire to free themselves from patriarchal and colonial domination. The Kanak women are on the march!

The World March of Women in Belgium and other feminist movements took to the streets of Brussels on strike to demand recovery plans that include a gender approach. The demand is that the post-Covid recovery policy be feminist and improve “women’s working conditions and access to health services,” adapting them for women and LGBTQIA+ people, argues Marcela de la Peña, coordinator of the World March of Women in Belgium. The organization demands “a real strengthening of the social protection system and a fight against the impoverishment of women,” lamenting the lack of structural funding for the health system. “During the pandemic, there was a lot of talk about the caring professions, which are mainly performed by women, but we don’t see them in the recovery plans,” the coordinator said.

See videos of the strike on MMF Belgium’s Facebook page

Photos from the participation of MMF France in the the protest in Toulouse, France. In addition, the MMF France has produced a special bulletin with texts and communications on women’s rights. You can access it by clicking here.

In Galicia the women of the WMW went to paint the streets of struggle and rebellion! The Galician militants put our feminist messages in several points of the cities! Transform the world to transform women’s lives!

Turkey National Coordination during demonstration on Sunday, March 7. All week long we were in the streets, in the fields and networks, in defense of our lives and territories, against capitalism, imperialism, racism and patriarchy! The women’s struggle continues!

In Western Sahara the day was for denouncing colonialism and recognizing the struggle of women against Moroccan occupation and showing solidarity with political prisoners like Sukatana Khaya.

Women of WMW Palestine took to the streets this March 8th in solidarity with women and the Sheikh Jarrah community suffering from settler threats in Jerusalem. Many families live under threat of having to leave their land! In addition, the women also organized a film screening activity and seminar on the reality of women in Jerusalem.

Video of the women of the World March of Women from Iraq during an act for the international day of women’s struggle!