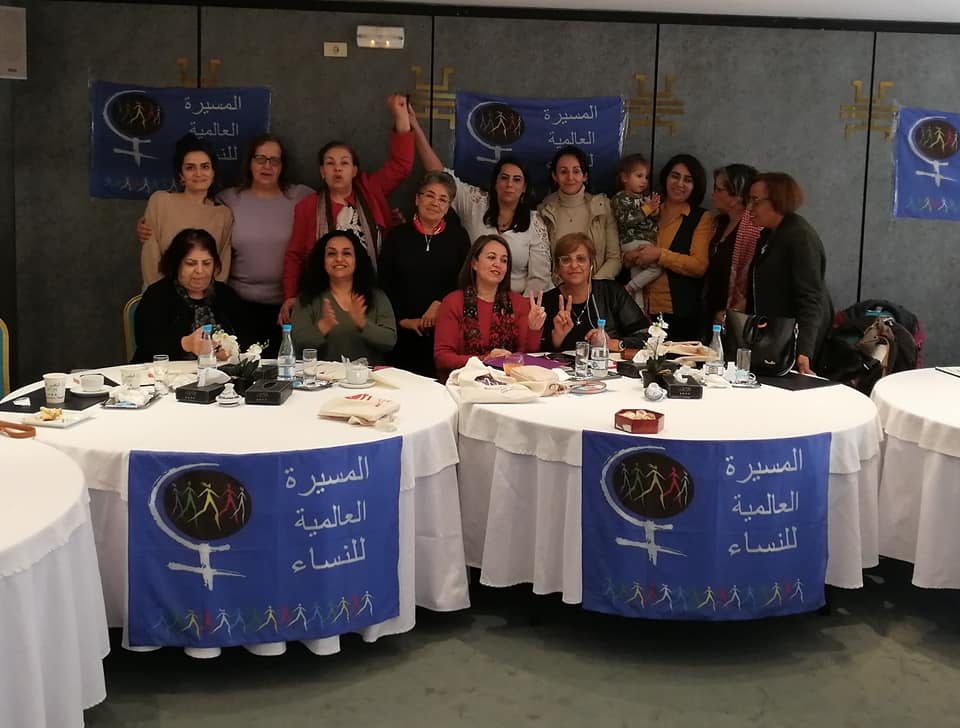 The World March of Women MENA (Middle East and North Africa) region held its regional meeting in Tunisia on March 25 and 26, 2022, with the participation of 14 representatives from the region’s NCBs representing Palestine, Tunisia, Jordan, Lebanon, Iraq, Kurdistan, Algeria, Morocco.

The sessions were moderated by the regional representatives in the international secretariat, Ruba Odeh from the Palestine NCB and Naama Nsiri from the Tunisia NCB.

The national coordinators reported about the conditions of women in their countries, and the mechanism of their work within the NCBs. The meeting then developed a work plan, to tackle the concerns and needs of the feminist movement in the region, as well as action days and landmarks adopted by the World March of Women, namely International Women’s Day, Palestinian Land Day, the Rana Plaza factory collapse, and the Global Poverty Day.

Furthermore, a committee was set to start preparing for the MENA region Women’s School, which will take place early October 2022.

The NCBs expressed rejecting wars and occupations, as well as the sanctions that are imposed on peoples, especially on the Russian people today and the blatant racist boycott that Europe is using against Russian artists, intellectuals, and athletes. The meeting also condemned the racist discriminatory practices followed by Europe in dealings with African, Arab and Afghan refugees, compared to opening its borders to Ukrainian refugees, as well as the racism that characterized media coverage of the global refugee movement versus the Ukrainian one. The NCBs expressed their support to refugee women everywhere, against the racist practices of white supremacist colonial thought, which still places peoples at different levels of humanity.

In parallel with the regional meeting, the secretarial members held individual meetings with the representatives of the NCBs to ensure follow-up of their work and to provide the support and assistance required to develop their activities.

Finally, on the occasion of Land Day, the NCBs highlighted the right of the Palestinian people to self-determination, as well as their right to their land, water and resources, just as it is the right of Palestinian women to live in peace and freedom like other women around the world, and to use and enjoy their natural resources.

The MENA NCBs began their activities this year in the most difficult circumstances and tensions, as a result of the economic and health crises, and the negative effects they had on the social and legal conditions of women, which further weakened and marginalized them. A road map has been drawn up by the various national coordinators with the aim of intensifying and framing efforts to support women in their daily struggles.