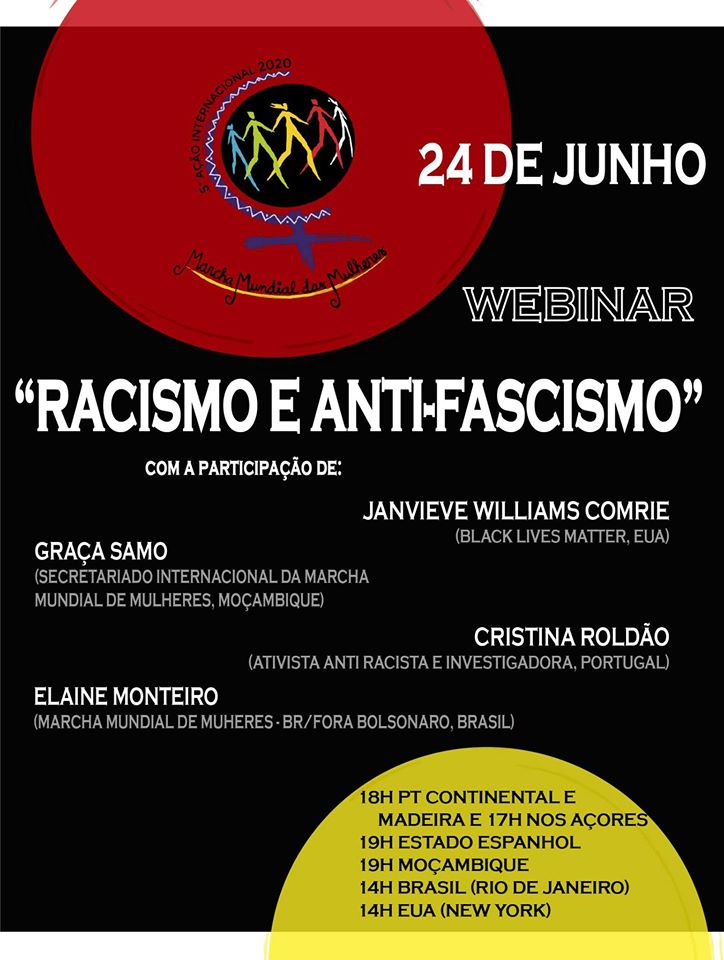 In 2020 the World March of Women (WMW) celebrates its 20 years as an international movement. Our 5th action is a call for confrontation, from the perspective of women’s struggles, with the progression of the forces of the extreme right that articulate conservatism and neoliberalism, threatening life and democracy.

Notwithstanding the difficulties that we face today, we know well how fundamental it is to build feminist solidarity, even at a physical distance: we have been doing so for 20 years and today, in this context of pandemic crisis.

Since it is more difficult to hold international meetings and actions, MMM from Portugal and from Galicia have taken the initiative to hold a series of webinars to deepen strategic reflection to feed feminist responses in these pandemic times. We intend to continue weaving networks in the construction of real and transformative alternatives.

In the first webinar, we discussed the crucial role of claiming and building practices based on food sovereignty in pandemic times. We now intend to discuss racism and anti-fascism.

Today, capital-life conflict has become more visible and paradoxical. The responses that most states have adopted to the threat of the epidemic have reproduced the patriarchal, racist and colonial mechanisms of power. In a first phase, in many countries the first response was “business as usual”, minimizing the threat to public health. As the need for action to contain the pandemic became evident, state measures included policing, restricting our freedoms and using repression within the logic of maintaining the capitalist governance of life – including the exploitation of care work.

In this capital-life conflict, we do not hesitate, we choose life and therefore contest the attacks on democratic and labour rights. It is in respect for human dignity and self-determination and not in their attack that we will find the answers to the strange times we live in.

That is why we cannot but greet the wave of protest and resistance in response to the murder of George Floyd and against racism and all the atrocities of the Trump administration. We also look with hope at the international solidarity and anti-racist mobilisation that has spread to various countries in the world, including Europe, under the slogan #vidasnegrasimportam

We believe that these mobilisations pose new challenges. We have therefore invited four anti racist activists from different movements and geographies: