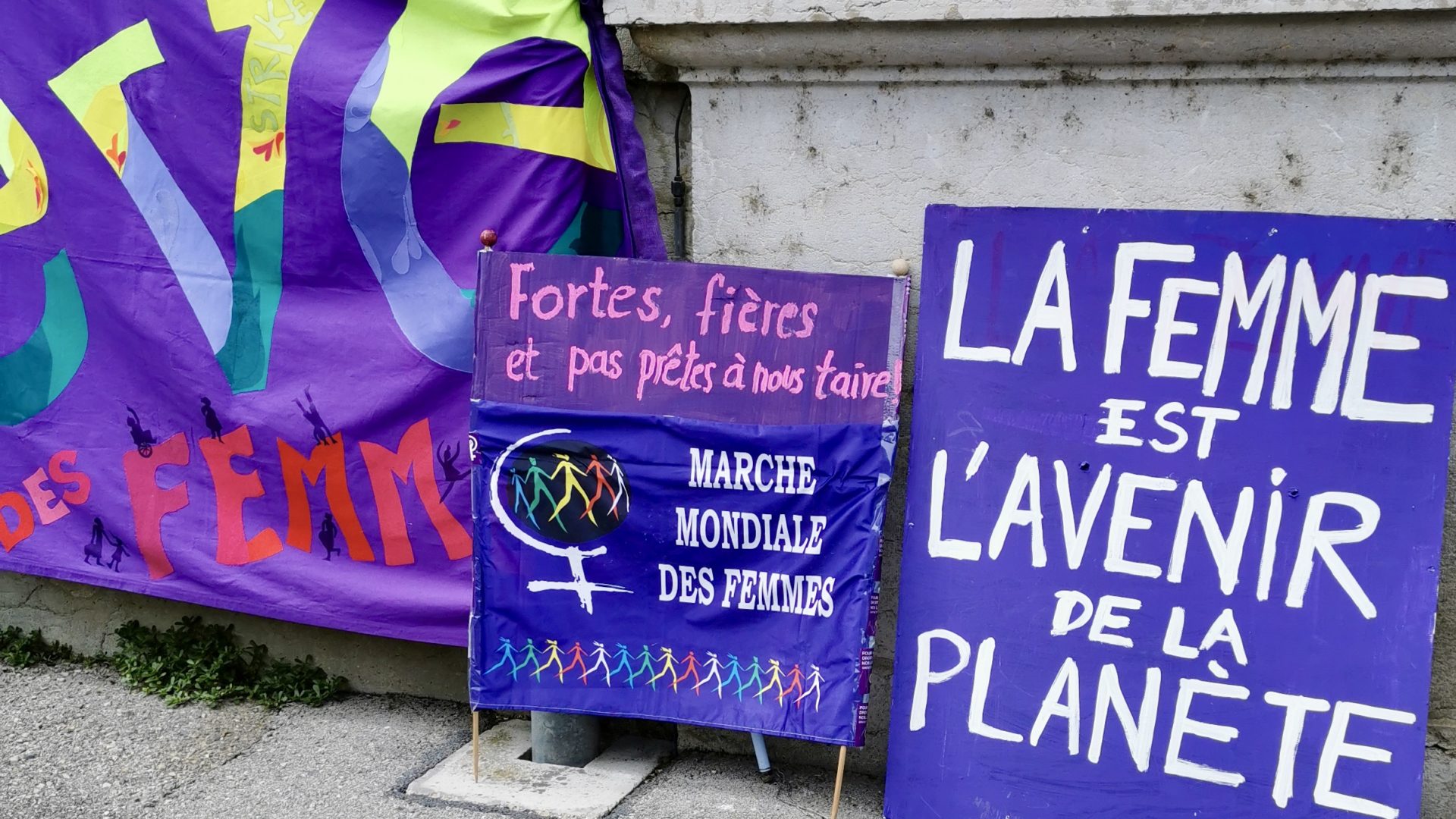 The coordinations of the World March of Women in Europe have been mobilizing since March, when we launched our 5th International Action, with activities both in the networks and in the streets. The news sent by the comrades from Euzkal Herria and Neuchatel show us how, with the arrival of the pandemic, the mobilization continued, responding to the situation challenges and planning actions for the future. We will keep on marching until all of us are free!

In Euzkal Herria, on the 8th March, the WMW communicates the first news about the 5th International Action, also coinciding with the 20th anniversary of the March. Months before, at the end of 2019, the companions began to work with the intention of inaugurating a process of creation and collective construction to develop the 5th International Action. During the whole organization appeared the Covid-19 and its following crises. Part of the elaboration process for the 5th Action was postponed but the carried out several actions to keep active and in touch.

On March 30th, “International Day for Domestic Workers”, together with two other feminist groups (Non-domesticated Workers and Lurgatz Anoetako Talde Feminista), they carried out a campaign on the networks to raise awareness about the struggle and reality of work and domestic workers. On April 24th, with 24 Hours of Feminist Solidarity Against the Power and Impunity of Transnationals, and a campaign on social networks, they also organized an online debate with colleagues who spoke about transnational companies, especially in the textile industry, and the impact on the body and in the lives of women. The event (“EMAKUMEAK * ERRESISTENTZIAN! Oihalgintzako langileak kapitala eta bizitzaren arteko gatakaren aurrean”) addressed different perspectives, including that of global South and North workers.

The situation of confinement did not prevent the companions from continuing to carry out their political work. “They block us in our houses, but we know that the problem is not the virus, is the capitalist, hetero-patriarchal, colonial and racist system that kills us and continues to oppress us, also before the sanitary crisis. For that reason, we have continued to organize ourselves, and to seek new forms of mobilization, in the networks, from our balconies, and even in the street.”, said our companions.

In the period of restricted mobility, three women were murdered in the Basque Country. In the first and double male murder, women went out onto the balconies to express their anger and tiredness, with pots and sirens. On May 6th, the cacerolazos went on and there was more flexibility for exits. The companions began to take their discomfort to the streets with posters, flags and banners. With the outbreak of the health crisis, and the worsening of the quality of life at all levels, several groups and women of the Feminist Movement of Euskal Herria realized the need to demand that the institutions that manage the resources take into account the fact that care is provided mainly by women (both those who are paid and those who are not), in order to structure an effective response to the needs of the most vulnerable and exposed people. A dossier was then made (based on the contributions of more than twenty feminist groups and other social, union and political agents), and presented in a huge virtual assembly with more than 150 women.

In Switzerland, as in the rest of the world, Covid-19 has put women at the forefront of the fight against the pandemic. No one can deny it: without them, without care work seven days a week, 24 hours a day, survival would be unimaginable. This work is essential for our lives and for the functioning of society as a whole, but patriarchal capitalism does not recognize it. Still worse, it seems that women, especially migrants, refugees, asylum seekers and undocumented migrants, will pay a heavy price in the crisis that will follow the pandemic crisis itself. Sexist and racist discrimination, violence, exploitation and oppression – which in June 2019 led hundreds of thousands of women to participate in the women’s strike in Switzerland – are now exacerbated.

Because of the restrictions imposed by the pandemic, this year’s Feminist Strike mobilizations could not reach a level comparable to last year’s, but in all Swiss cities, women of all generations, sexual orientations and backgrounds responded as if to a collective call for a feminist strike. “At precisely 3:24 p.m. there was an intense cry of anger from all sides. The many slogans written on impromptu panels testify to the determination to organize in ways that go beyond simply denouncing injustice and violence. We will not give up. There is no return to the macho norm. With or without the coronavirus, we will be there! Change is now! The Covid-19 pandemic does not diminish our will to resist to live, nor our determination to march to transform!”.

Due to the pandemic, the closure of the WMW’s 5th International Action on 17th October 2020 will not be able to take the form envisaged in Europe: a feminist mobilization on the French-Italian border of Menton-Ventimiglia to denounce the murderous policies of migration. “We are not abandoning this project because the walls industry we are fighting against is more murderous than ever. Millions of people are going into exile in the hope of escaping war, hunger and violence. Nothing and no one is spared to save the profits of a minority (1%) that dominates the world (99%)”, say the comrades. “The pandemic aggravates the situation, but it also sharpens our will to resist and fight to break down all the walls that oppose the rights of women and people. The closing activities of the 5th Action in Switzerland will be redesigned, always with the objective of denouncing the policies of mobility criminalization, embodied in the closing of borders, with especially harmful effects for women and LGBTQI+ people on their way to exile.