Black, African and Afro-Latin women’s struggle on the agenda of regional webinars of the World March of Women 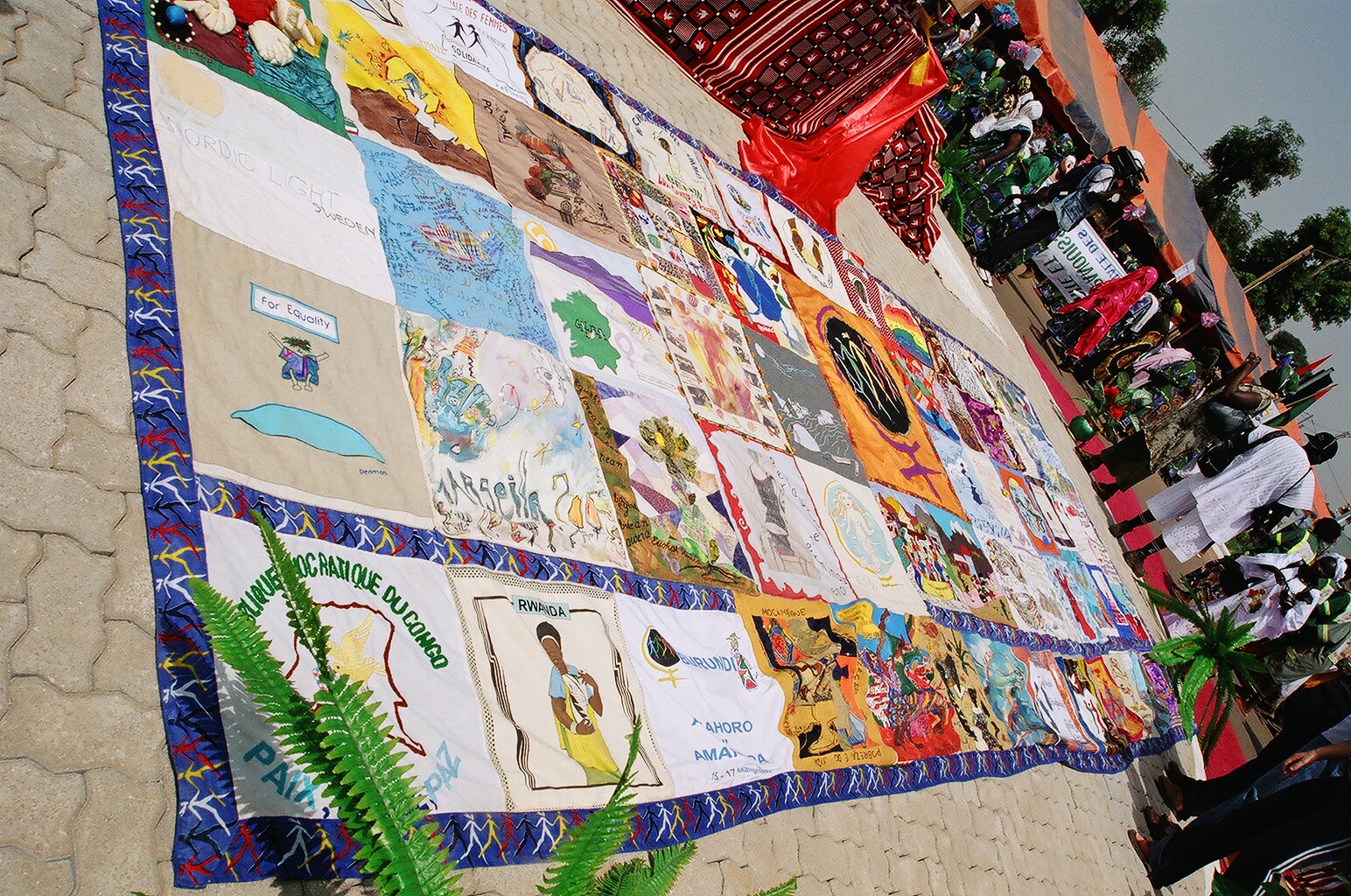 The month of July is marked by very important dates in the history of the struggle of Black and African women. In the Americas region, July 25th is celebrated as Black, Latin American and Caribbean Women’s Day. In Africa, the Panafrican Women’s Day is celebrated on July 31.

Throughout the month, the World March of Women (WMW) in various parts of the world was involved in activities and initiatives to mark the importance of these dates and to recapture the contributions of black women in the struggle for a more just world, free from the violence of colonial, racist and patriarchal capitalism.

The history of struggle of black women is a fundamental part of the history of struggle of the Latin American and Caribbean peoples. More than resisting, women who organize collectively to combat multiple racist oppressions have built a political repertoire that affirms the Buen Vivir (Good living) and a social transformation that liberates us from racist and patriarchal capitalism.

To talk about the perspectives and experiences of these struggles in the Americas, the World March of Women met on July 23rd, in a live broadcast that counted with the presence of sisters from Cuba, Honduras, Chile, Peru, Brazil, United States and Venezuela: Analoy Lafargue (Cuba), Juliana Mittelback (Brazil), Mariana Lacerda (Brazil), Massay Crisanto (Honduras) and Piper Carter (USA), as well as the cultural presentation of Gabi da Pele Preta (Brazil) and Luta Cruz (Chile).

Racism against the Black population and indigenous peoples is structural to the consolidation of the countries of the continent. Marginalizing and invisibilizing the contributions of these peoples are strategies for the advancement of the violence of capitalism on the lives of people and territories.

“Capitalism and racism are systems that feed each other, capitalism as a system that exploits people and has in its roots the maintenance of inequalities, finds in racism the possibility of its greater exploitation, having also the acceptance already set by the history of slavery, that this population is subalternized and can be exploited and placed at the margin and being appropriated”, emphasized Juliana Mittelbach, from WMW Brazil.

Analoy Lafargue brought her reflection from the Cuban reality: “From early on, it was realized that the construction of socialism was not possible without the epistemic basis of feminism and an anti-racist struggle. Thus, women in a general sense enjoyed broad possibilities of emancipation and independence from hetero-normative male domination.”

In the blog of the World March of Women of Cuba it is also possible to read a reflection made from the contributions of comrade Analoy Lafargue representing the Cuban Women Federation (Federación de Mujeres Cubanas – FMC).

The activity besides strengthening the political and cultural exchange of the comrades of the region contributes to the mobilization of the March of the Americas in the process of preparation for the international meeting of the WMW at the end of October.

In the Youtube transmission of the World March of Women of Brazil in Portuguese, and on Facebook of the WMW Chile in Spanish, it is possible to check all the contributions and the cultural presentations of the women:

Celebrating Pan African Women’s Day in webinar: “If we are united in solidarity, our steps will be wider”

On July 31 the World March of Women in the Africa region organized a webinar for African Women’s Day. Besides celebrating the date, it was a moment for women to share contexts from different countries in the region, such as South Africa, Sudan, Mozambique, Zimbabwe, Uganda and Western Sahara.

The activity counted with more than 80 connected women and was mediated by Sophie Dowllar, from the WMW Kenya also a from the International Committee of the World March of Women. Still in August the African women of the WMW will meet in other webinars, spaces that are also serving as preparation for the International Meeting of the WMW.

Wihelmina Trout, from the South African Women’s March, shared the situation of political instability experienced in the country, emphasizing that “we, from the WMW, can never forget the real objective of our march, our struggle is against a system that marginalizes women, our march is based on solidarity and support for women, always with efforts to strengthen the organization of women in the struggle against oppression. Wihelmina also briefly shared the historical political context of South Africa. According to Wihelmina, In South Africa, rural women’s movements were hampered during the pandemic, as there was an increase in care and domestic work. Many women attend community spaces promoted by churches that deal with the issue of financial autonomy. Despite all the difficulties, she points out that women continue sharing their knowledge from the native African people, the native knowledge about agriculture, as a way to think about revitalizing themselves and continue fighting to put food on the family table.

Hamidah Nassimbwa is from the Uganda Women’s Collective Movement.  She is currently living in Kenya, and told about the efforts of women in Uganda to organize even in the face of the complicated situation in which the country finds itself with increasing authoritarianism coupled with political corruption. “Women are losing their children, we are losing our freedom as leaders maintain their secure living conditions, using public resource for their own benefit, and not governing for the people.”

Among women’s challenges are the issue of financial autonomy, the impossibility of claiming better working conditions, and domestic violence that is also increasing and the government does not face the issue. Once again, the low political representation of women does not represent better conditions, placing women as the only ones responsible for thinking up solutions. “We have to fight for ourselves, looking for solutions as movements to move forward, strengthen ourselves, without waiting for government support. We have to think of solutions that can make a difference in the financial issue, in financial education, in the education of children and young people. And this is an issue in all of Africa, so we need to think about this together. Who knows, we might even think about a kind of solidarity bank for African women, since the forms of financing today continue to be colonialist.

Activist Maha Elzein from South Sudan shared her recent experience in December 2020 with the beginning of a transitional government as a peace agreement was signed after 17 years of armed conflict and instability. According to Maha, many women were fighting in the resistance against the regime, and finally got the transition of government. However, women did not have much space in the transition process, with only 4 women ministers, and in a council of 14 men, only 2 women, provoking reflection on the few opportunities to assume decision making spaces, even though women are the front line to build popular resistance.

For Julia Wachave, from Cabo Delgado, women must shout in one voice for the end of violence, need to organize in all spaces of power, but mainly pull more women into our movements. “I work in rural areas and we try to pull those women who don’t even know their rights, or know that they suffer violence. In the north of Mozambique the cities are full, with displaced people. We have supported with mobile brigades in health, health and legal assistance, awareness raising and information. We have the great challenge of thinking about ways of life, since many women who used to live off agriculture can no longer do so. We have been trying to help them so that they can think about small enterprises, about information technology training so that at least one woman can support her group to access information.”

Sitabile Dewa from Zimbabwe shared challenges experienced by African women during the pandemic, such as the issue of the vaccine monopoly, where only 3% of Africans have been vaccinated while as Pfizer are making about $40 million in profits for the vaccine; the deteriorating political environment and the increased militarization of states; the unequal access to digital education during the pandemic and digital divide, women are excluded and how those who have access can contribute to information, citing the situation of elections in Zambia in this context, which means that women need to campaign in digital environments, but how to do this if they do not have access to phone and internet networks.  Furthermore, she stressed, “as a member of WMW we need to create platforms that have more young people, it will be great to make sure that young people can also participate, so that they can think and act on their economic situation in Africa.”

Omaima Elmardi also contributed to the debate by telling about the situation in Western Sahara, the last colony of Africa that now faces neocolonialism promoted by its neighbor, Morocco. “It is sad that another African country, our brother, is dominating our country. Women have been raped, marginalized. The president and his family are not allowed to leave their homes. So we ask all African women for our country. As long as colonization is in our country, our freedom will not be complete. The Western Sahara is being shaken by covid-19, bringing even more challenges regarding protection, economic issues, and we women of the Sahara are ready to fight together with you against violence. If we are united in solidarity, our steps will be wider.”

Also in virtue of the African Women’s Day, the feminist and popular communication portal Capire published a video with a message from Graça Samo, coordinator of the International Secretariat of the World March of Women, and a series of contents about the struggle and resistance of black and African women: