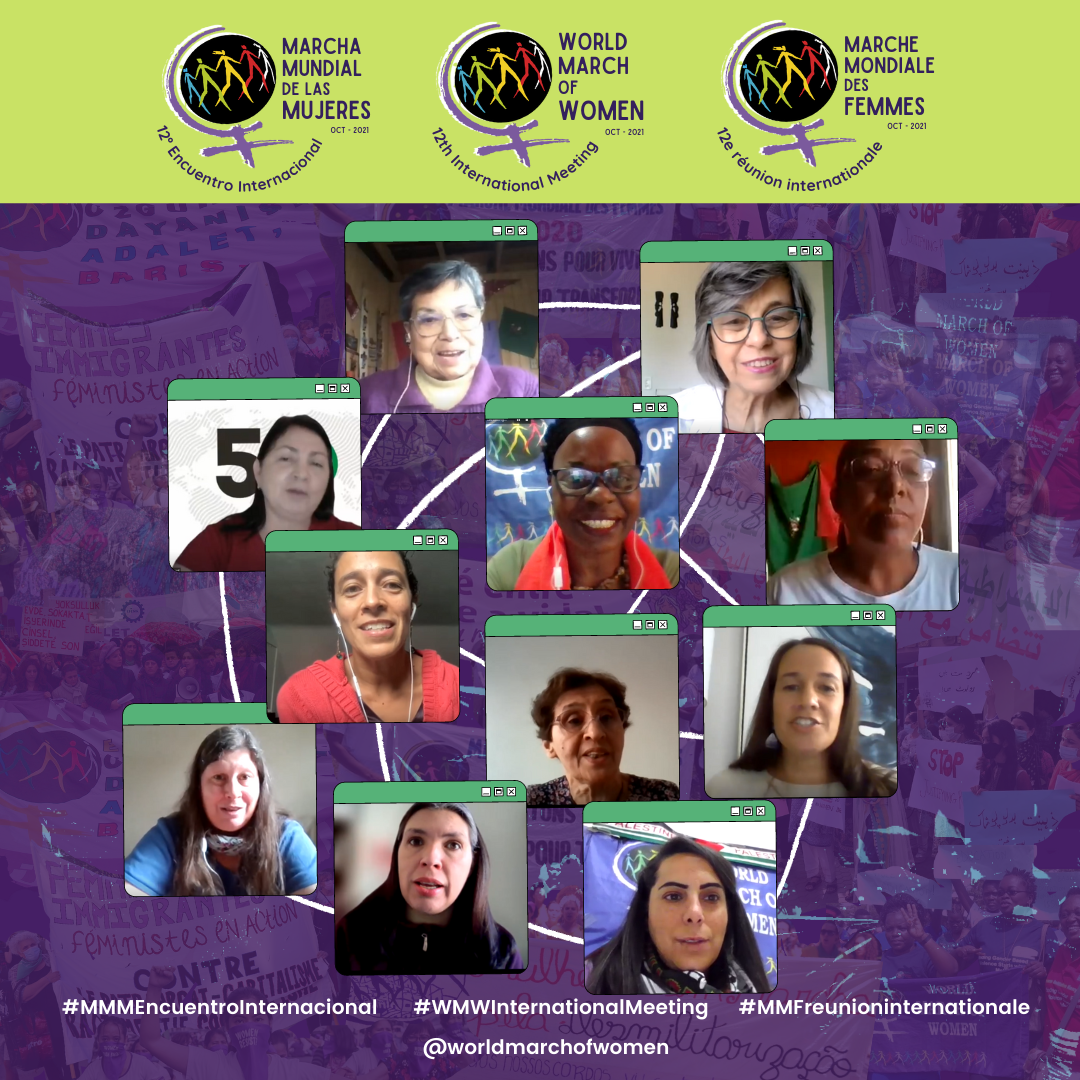 On Saturday, October 23rd, the World March of Women held the opening of its 12th International Meeting (IM). About 130 women from more than 40 countries from all regions of the world were present to strengthen and connect the feminist international political agenda. Allied movements and organizations participated with greetings: La Vía Campesina, Friends of the Earth El Salvador, Trade Union Confederation of Workers and Women Workers of the Americas and Jornada Continental por la Democracia y contra el Neoliberalismo, International People’s Assembly, Grassroots International, Why Hunger and World Rainforest Movement.

The opening was public, but the 12th International Meeting of the WMW continues with internal sessions on October 29, 30 and 31. With the presence of delegates chosen in each National Coordination, the Meeting has the objective of strengthening the organization of the movement in the territories where we work. In this moment of transition in the International Committee and Secretariat, we will evaluate our accumulations and learnings to think about the future, updating our organizational processes.

The opening of the meeting was facilitated by Nalu Faria, from the International Committee of the MMM for the Americas region. During the mediation, Nalu reminded us that “to put the sustainability of life at the center is to think about how care organizes all our relationships. We have seen during this period how women have been protagonists in sustaining life, in building collective actions and visions of the commons, linking them to the social relations that we want to build our knowledge, ancestry, and histories as peoples of the world.

The opening began with a mystique in which we could remember part of the history of the March with a video version of the photo gallery “Living memory: the World March of Women International Meetings”, organized by the Capire portal. Graça Samo, coordinator of the International Secretariat of the WMW, and Pancha Rodriguez, from La Via Campesina, made interventions about the feminist international political agenda, the conjuncture, the challenges for feminism, the popular movements and the life of women in the face of the neoliberal offensive and the conflict between capital and life.

Pancha Rodríguez: we must recognize the economic value of the work of women and our communities

Pancha Rodriguez, leader of the Latin American Coordination of Rural Organizations (CLOC-Via Campesina) and of the National Association of Rural and Indigenous Women (ANAMURI) from Chile, highlighted that the defense of food sovereignty, a principle proposed 25 years ago by La Via Campesina, is a direct response of women and peoples of the world to the wiles and offensives of neoliberalism.

Social movements have been brutally attacked everywhere because our decision is to put an end to injustice in the world. And women have worked incessantly to build the global alternatives; the guarantee of healthy food and the development of food systems through agroecology and the safeguarding of biodiversity; justice and health for peasant peoples and also in the cities. The role of women is fundamental and for this reason we declare: Food sovereignty now, but with gender justice.

We have defended our sovereign right to produce and consume food. We value solidarity, our communities and our territories and their biodiversity. One of our objectives is the struggle to recover and multiply our seeds, opposing transgenics, agrotoxics, and transnational corporations.

Today, at the recent UN and transnational food systems summit, there is an articulated plan to end peasant agriculture and sell agriculture 4.0, even in the midst of a pandemic. These are false solutions. So we fight against neoliberalism, imperialism, patriarchy, and for our rights.

We have the right to live a healthy life without pesticides, the right to protection and to live a life without violence. That is why overcoming poverty and inequalities experienced by women for our organizations is fundamental. With feminism, we rural women will help build socialism in our territories around the world.”

Graça Samo: we are here to say that the struggle continues

Our strength comes from our capacity to mobilize and organize in political terms, to increase our resistance against the forces of oppression that control our bodies, territories and minds. We also reaffirmed in the 5th International Action and in the last International Meeting in Bilbao that our challenge is to reorganize and unite women more. Because we live in times when everything is done to divide us, to separate us from our common priorities and agendas.

When the pandemic came, we visualized issues that were already in place about how women suffer palpable oppressions. We saw the sexual division of labor, with doubled workloads; how our resources are in the hands of capital; and how important it is that we occupy public and private spaces, after all, most women die in places that were meant to be safe.

We saw how technology today serves to control women and their desires. In most African countries, pregnancies and child marriages have increased very fast. And we have been fighting against this for years. The pandemic has shown how hunger has become more habitual than ever. And if women cannot follow their economic activities, they become more dependent. People are increasingly forced to migrate by transnational companies invading their territories.All this has impacted us, along with new phenomena that make it impossible to occupy the streets. Most of us were born in the struggle of the streets, occupying the lands, the public spaces.

In these 20 years, we have been building processes of collective reflection. When we came together to start the process of building the International School of Feminist Organization, we realized how much we have accumulated. Our struggles are linked to our anti-systemic feminist agenda to rebuild what we understand as the State, with the model of democracy that we want, with shared responsibilities in all spaces.

When we unite our voices, we reaffirm our commitment to leave no woman silenced and bring the voices that are not heard, of companions who suffer from militarism and religious fundamentalism. Our solidarity with Palestinian women companions, who have suffered political persecution after statements by the State of Israel classifying feminist organizations as terrorists.

We bring distinct knowledge and organizing skills as a movement, but we cannot forget the incoming comrades. We need to recognize that we can only go so far as a movement. When we are together our enemies can’t identify us, because we are a mass movement.

Greetings from the allies

During the opening round, we also received greetings from seven companions from different allied organizations.Silvia Quiroa Yada, from Amigos de la Tierra El Salvador, began the round highlighting the importance of this alliance to strengthen the critical vision in the face of the commodification of life, women and nature. “ATI understands that it is necessary to dismantle patriarchy to end the systems of oppression that assault women and nature, and so our vision is for anti-capitalist and grassroots feminism to build capacity for peoples’ participation that put life at the center.”

Bárbara Figueroa, from Trade Union Confederation of Workers and Women Workers of the Americas -CSA/TUCA and Jornada Continental por la Democracia y contra el Neoliberalismo, shared feminist solidarity from the working class. “Our struggles are found in the patriarchal and racist model of production. We have been battered not only by the dominant economic and labor model, but also with domestic violence. Care work needs to be valued. Only the solidary, organized and internationalist struggle will be able to confront this. The revolution and the future will be feminist and with the working class, or it won’t be”.

Comrade Zahra Azlaf, from the Democratic Way of Morocco, represented the International People’s Assembly – IPA and reaffirmed “support and solidarity with the peoples who fight against capitalism, Zionism, patriarchy, colonialism. We are a people’s organization, we are the peoples who struggle all over the world and we resist the economic blockades and sanctions of capitalism in the face of the crisis and poverty that increases as never before. We have worked together, in the Anti-imperialist Struggle Week, against food transnationals, denouncing climate change, in the Feminist Anti-imperialist Festival, and we continue together because our struggles complement each other.

Sara Mersha, from Grassroots International, pointed out that “WMW connects the struggles and the grassroots with feminisms from all over the world. It is very important for grassroots movements to know that they are not alone. On behalf of everyone at GRI it is a pleasure to be with you in alliances around the world. GRI’s mission is to connect the US with movements and organizations that advocate and build alternatives so that they can create strategies. WMW and grassroots feminism are the antidotes.”

Kristen Wyman of Why Hunger emphasized “support for movements like the World March, especially on the issue of food, which we see as a right. We want to dismantle patriarchy and its militarized relations. We keep learning from you, we wish you strength and lightness”.

Lizzie Díaz, from the World Rainforest Movement – WRM, pointed out the importance of “learning from our experiences so that we can break the silences and participate in the decision-making spaces. In this process, alliances are key. WRM has an important role in internalizing feminist perspectives in movements and organizations in the construction of an anti-capitalist feminist project. WRM is an organization that accompanies territories and communities that suffer from land grabbing. In this sense, we continue together with WMW strengthening the struggle for justice for all women”.

Elsa Sánchez, from La Vía Campesina, hailed the continuity of the alliance and the global strength of feminism in movement of the WMW. “Alliances with movements are key to raising women’s awareness of oppressions and articulating feminism in practice. We want to raise the voice of women and our sisters and women in Cuba, who suffer from the criminal economic blockade, as well as Haitian women. Women make up half of the labor force in the countryside worldwide. We defend food sovereignty and agroecology, we are the ones who can solve the planet’s environmental problems. Socialism is built with feminism. Let us internationalize the struggle. Berta Cáceres lives!”

The WMW has solidarity and internationalism as principles of struggle and organization.We reaffirm our solidarity with Palestinian feminists, who have suffered political persecution and accusations of terrorism. In recent days, the Zionist State of Israel has classified six civil society organizations as terrorists, including the Union of Palestinian Women’s Committees (UPWC), a feminist organization that is part of the WMW. Ruba Odeh, representative of the Middle East and North Africa – MENA region in the International Committee of the WMW, read the statement of the organization denouncing Israel.

At the end, a special moment was held, with a minute of silence in memory of WMW activists Awa Ouédraogo and Shashi Sail, who passed away in 2021. Awa was from Burkina Faso, was a founder of the MMM and twice was the representative of Africa in the International Committee. Shashi was also active in the founding and early years of the World March of Women. She was fundamental for the internationalization of the movement, being part of the movement’s International Committee from 1998 to 2004. The participants of the Meeting sent words of affection and recalled the contributions of both in the struggle for the emancipation of women in their regions and in the world.

Keep following the 12th #WMWInternationalMeeting in the WMW’s social media: