Notes produced during the 12th international meeting in October 2021 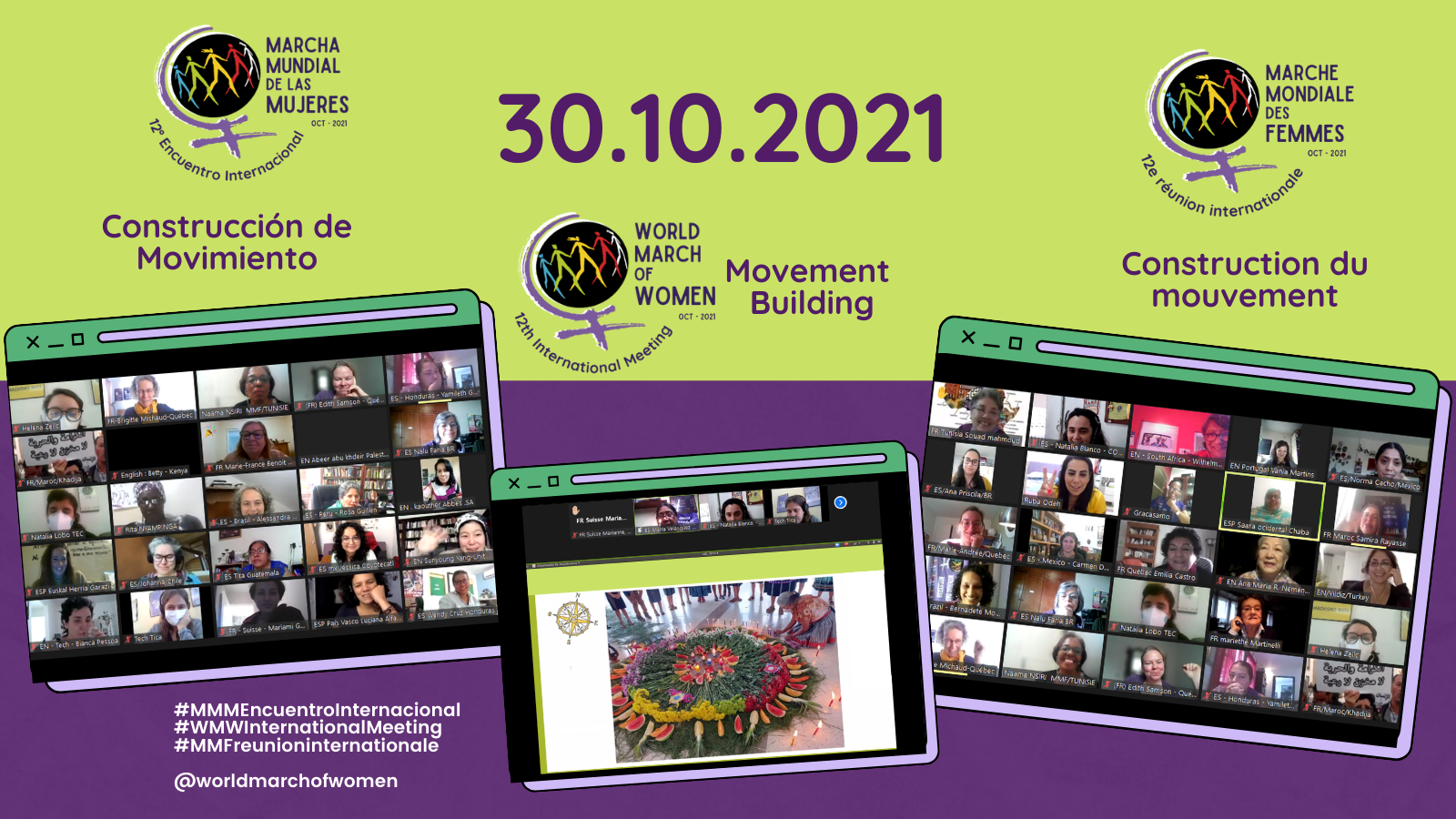 The 12th International Meeting of the World March of Women starts

On october 29th, the internal activities of the 12th International Meeting of the World March of Women began, with the presence of more than 120 women from 50 National Coordination Bodies. The day began with a mistica by women from Africa. Women from Uganda, Zambia, Western Sahara, Mozambique, Tanzania, and Kenya read the poem “This Land Africa” and sang inspiring songs. Last week, the Meeting had its public opening, with the participation of women from WMW and allied movements.

Graça Samo, International Secretariat coordinator, started the international meeting sharing its planning process and its challenges for reorganization due to the pandemic, which turned this into a virtual event. She also highlighted the importance of previous regional meetings, through their results and contributions to the discussions of this edition of the International Meeting.

Ruba Odeh (Palestine) and Bushra Khaliq (Pakistan) facilitated the panel that opened the political discussion, a presentation of regional analyses of the political moment. Mafalda Galdames from Chile shared the regional process of the Americas, focusing on the mobilizations against neoliberalism and for democracy, as well as the continental organization process. Jean Enriquez from the Philippines presented on the Asia and Oceania Meeting. She recounted the challenges the sisters identified at that meeting, especially the situation of women and the people in Afghanistan who are suffering from the takeover by the Taliban, a condition that affects the entire region. In the Philippines, authoritarianism attacks life through militarism and its alliance with big corporations. Vera Silva, from Portugal, presented the struggle agenda of European women, especially against borders and free trade agreements, recognizing the imperialist role of European states, which uphold poverty and climate change throughout the world. Naama Nsirie, from Tunisia, presented the discussion of the regional meeting of the MENA region (Middle East and North Africa), which is affected by militarization and capitalism’s assaults. Against this, they have been organizing more strongly and building solidarity. Sophie Ogutu, from Kenya, spoke about Africa’s challenges, such as violence, control and the need for women’s autonomy over their bodies and sexuality. The activists have been seeking to build feminist, solidarity, agro-ecological and popular alternatives.

In the plenary session, women highlighted the importance of young women’s actions and articulations to strengthen our feminism; the experience of the International School of Feminist Organization; and also the urgency of our solidarity with the women of Palestine, Sudan, Western Sahara, Cuba and all women suffering from authoritarianism, colonialism and political persecution. Also denounce and combat violations against women and girls, LGBT, black, indigenous and migrant people with migration and asylum policies based on deportations, return and externalization of borders. Women lead the struggles against the power of transnational corporations and their territorial attacks, as well as their attempts to co-opt and institutionalize the struggles in the territories. The participants emphasized the actions organized in unity in the streets as one of the main strategies to build our movement.

At the end, the women evaluated the day in a collective word cloud, where they wrote words such as “anti-patriarchy”, “solidarity”, “together we are strong”, “participation”. The closing mistica of the day was the music of a group of women from the Basque Country. Tomorrow, the International Meeting continues, and we will send a new short report of the day.

Check out what happened on October 30 at the 12th International Meeting of the WMW.

Mistica opened and closed Saturday’s (Oct 30) activities of the 12th International Meeting of the World March of Women. From the Mayan cosmovision, sisters from Guatemala started the session speaking of the bird symbol in the Tz’ikin calendar to connect all women of the world with strength. They also presented the music “Mujer Indígena” (Indigenous Woman), by singer Sara Curruchich, to strengthen our energies to continue fighting. Later, the session closed with a mística from the Asia-Oceania region with a song called “Tod Tod Ke Bandhanon Kot“”, about freedom. The mística connect with the struggles of the people, solidarity, values of justice, equality, freedom and peace.

Vania Martins from Portugal and Mafalda Galdamez from Chile facilitated the session. Following the mística, Tica Moreno and Alessandra Ceregatti from Brazil, presented a synthesis of the previous day’s discussion. After that, it was for breakout discussion sessions: there was 1 multilingual group (with live interpretation in Arabic, Spanish, French and English), 2 groups in French, 3 groups in English, and 3 in Spanish.

In the groups, the women reasserted their criticism of the fragmentation and institutionalization of our struggles and the need to update this debate. Our proposal for change connects many experiences, and is very important to strengthen our connections. The sisters identified our advances in the construction of the movement’s communication, continuously through the WMW channels, as well as through Capire’s creation and upkeep. We have to continue building our feminist, anti-capitalist, anti-racist political action through collective preparation and communication, aiming at alternatives, including technological options that expand accessibility. We also want to expand the resources for producing multimedia communications, especially short videos in different languages. It is a challenge to strengthen the WMW as a broad and grassroots movement, with an intense international agenda, linking local and global and the diversity of people present in our organization. The challenge is to broaden access and organize new ways of seeking linguistic justice. Solidarity is a practice and a challenge, which we must deepen at the international level, supporting our sisters and peoples in resistance around the world, in militarized territories such as Cabo Delgado and Western Sahara, as well as others that suffer from censorship and anti-democratization, such as El Salvador. Our strategic alliances were highlighted as a fundamental part of the construction of a feminist project for transformation.

We began October 31, the last day of the 12th International Meeting of the World March of Women, with the powerful mística from the Middle East and North Africa (MENA) regio; we  reaffirmed our struggles for a Palestine free from Zionism and colonialism and for our  comrade Khitam Saafin’s liberation, as well as the liberation of all those who struggle. The MENA region has expanded its articulation and organization of women in this last period and the mística was also an opportunity to celebrate that, through images of sisters from the region in the streets while listening to a song dedicated to the Palestinian resistance.

Nalu Faria, from Brazil, facilitated the session. Tica Moreno presented the synthesis of the previous day; she recounted the strengths, challenges and proposals for the World March of Women that the sisters identified in the breakout discussions. Graça Samo presented a report on the work of the outgoing International Secretariat, which included political management and resources. In plenary, participants discussed the WMW’s needs in organization for the next period. They spoke about the need of maintaining transparency, and of having a strong and committed International Committee and International Secretariat. They also indicated the need of strengthening alliances as well as the March itself, in the regions and in national coordinations, the need of collectivizing our agenda and dynamics of organization and action as to gain strength.

At the moment of presenting the members of the incoming International Committee, the outgoing representatives announced the indications of their regions for the next mandate. The new Committee is formed by Nalu Faria and Tita Godínez in the Americas, with Alejandra Laprea as substitute; Solange Kone and Sophy Ngalapi in Africa, with Rita Nyampinga as substitute; Marianna Fernandes and Luciana Alfaro in Europe, with Marcela de la Peña as substitute; Ruba Odeh and Naama Nsiri, for the MENA region, with Teeba Saad as substitute; and Bushra Khaliq and Françoise Caillard, for Asia and Oceania, with Jean Enriquez as substitute.

After the approval of the new IC, we turned to the presentation of Turkey as the NCB that will assume the International Secretariat, under the coordination of Yıldız Temürtürkan, together with the Flying Broom Foundation organization. Gülser Kayir and Yıldız presented the trajectory of the WMW in Turkey, its organizational capacities after more than 20 years in the country, its logistical and financial structures, and its capacity to influence the regional and international context. They also shared the collective decision making process of applying for the IS, as well as the challenges. This new term is an opportunity to expand the organization into strategic regions that Turkey is close to, such as the MENA region and Asia-Oceania. The transition will take place over the next months, with permanent contact between Turkey, Mozambique (the outgoing Secretariat) and Brazil (currently in charge of communications), with the support of the International Committee, in its monthly meetings.

The Meeting closed with the reading of our final declaration, which asserts the feminist positioning against the capital-life conflict, the authoritarianisms and the neoliberal, patriarchal and racist organization of the economy. The declaration also highlights resistance, solidarity, self-organized political actions of transformation towards a society of peace, equality, freedom, which puts the sustainability of life at the center.

The declaration is published on the World March of Women website.