Declaration of the 12th International Meeting of the World March of Women 29th-31st October, 2021 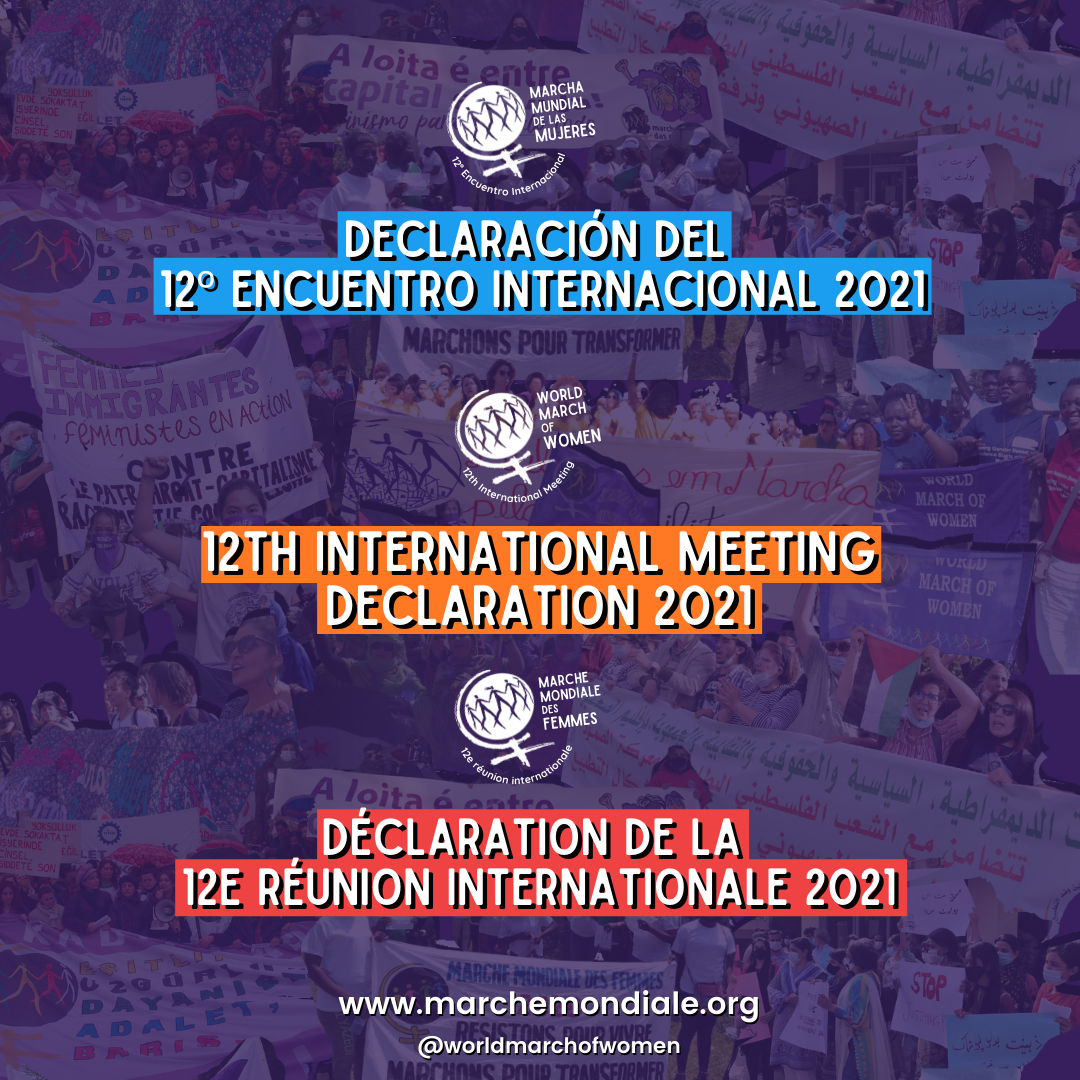 We, Women of the World March from the North and South of the globe, came together from 50 countries for our 12th International Meeting, held from 29th to 31st October, to share our struggles and build a common analysis to strengthen our actions. The pandemic has brought to light the underlying inequalities and multiple crises of the system, the commodification and privatization of public services, environmental degradation and the ecological crisis driving the climate crisis. We face the aggravation of the conflict between capital and life. Exploitation is increasing and women are the most affected. Corporate interests are put before health, as we have witnessed unequal access to vaccines around the world, poor public services, and reduced carefor other diseases and sexual and reproductive health. Multinational corporations grab and plunder land, without any respect for human rights, and impose illegitimate debt on the peoples of all continents of the world.

The rise of authoritarian governments and conservative and fundamentalist forces has set back the rights we have fought for. We face increasing violence and militarization that seeks to control our territories, our lives, our political work, our bodies and sexualities. New forms of colonialism are reflected in racist migration policies, closed borders, criminalization of refugees, and the increase in economic, political and financial blockades against peoples whose governments do not bow to the interests of this predatory system. Capitalism advances with a conservative, fundamentalist, authoritarian neoliberal perspective, imposing a project of death and criminalizing social movements who dare to stand against it, while proposing false solutions, such as green capitalism.

Consciously and deliberately, the actors behind patriarchal and racist capitalism impose a series of policies which privilege the rights of the few over those of the majority of humanity. This results in the deterioration of living conditions, deepening the marginalization and discrimination of the most disadvantaged communities: refugees, agricultural workers, migrant workers, LGBTQI+ people, elderly people, homeless people, people with disabilities, racialized bodies, etc. Simultaneously, they have generated crises in the housing sectors and reduced sexual and reproductive health care services, making women and female identities increasingly vulnerable to gender-based violence and economic exclusion.States aligned with capitalism have responded to these crises by reinforcing individualist discourses and their patriarchal, racist, heteronormative policies, making use of militarization, border exclusion, and criminalization of migration.

On the other hand, we, as women, have responded to the pandemic by reinforcing solidarity as a way to ensure appropriate living conditions and provide food, health care, and at least some access to supplies, while also resisting and organizing, demanding public policies to tackle the pandemic such as access to housing, health care, vaccines, and productive assets, as well as policies to protect employment, workers’ rights, and income during lockdown.

We, the World March of Women, resist the capitalist and patriarchal system and denounce the interventionist politics of imperialism, Zionism, and all forms of racist and neocolonial occupation, religious fundamentalism, and attempts to co-opt feminist struggles. We reaffirm our commitment to continue in march, resisting to live and to transform the systems that generate poverty and violence against women.

We reaffirm the power of our local, regional, and national organizing as the foundation for the strength of our internationalist movement. We call on all women and women’s groups and organizations to continue organizing and rallying forces through grassroots organization, popular education and communication processes, building collective action and feminist economy,and taking to the streets. We recognize the power of social media and we bring Capire to be the voice that connects every organized woman in our movement and our alliances in defense of living life with dignity.

We have positioned ourselves by putting the principle of the sustainability of life on center stage, reaffirming that we are eco-dependent and interdependent. We want to live in harmony with nature and build new social relationships based on reciprocity of care and reinforcing the commons. We are also committed to fighting against femicide, against all sexist violence, and against the commodification of women’s bodies. From the political views and experienceswith internationalist struggle that we have collectively accumulated over time, we continue to be committed to building feminism in alliance with other movements across local, regional, and international levels.

We stand in solidarity with all women and peoples who struggle for their sovereignty and self-determination: from Afghanistan to Palestine, Sudan, Kurdistan, and Western Sahara, from Cabo Delgado to Mapuche women, from the Q’eqchi’ people of Guatemalato Honduras, El Salvador, Cuba, and Venezuela, and all exiled migrant women who are forced to flee their countries and suffer all forms of violence.

We reaffirm freedom, equality, justice, peace, and solidarity as our core values, and we call for a continued expression of solidarity with the women and peoples who are fighting for the self-determination of their lives, bodies, and territories. We as women must beon the march until all women are free!