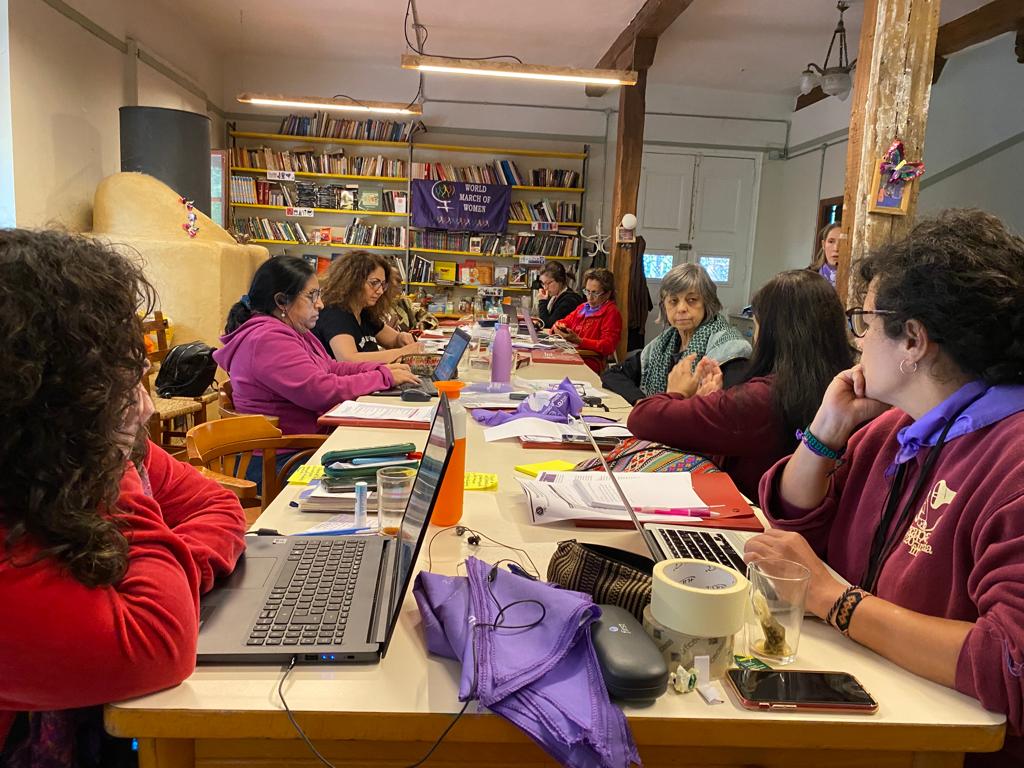 WMW International Committee meets in the Basque Country: Identifying challenges, resistance, and opportunities for our organization

On October 24th, the members of the International Committee of the World March of Women representing the five regions gather for a face-to-face meeting in Basque Country.

In the coming days, until October 28, the IC will discuss and identify the challenges and proposals of women in struggle in the territories according to the national, regional, and international contexts; evaluate our latest actions as WMW, and discuss the draft of a strategic action plan to strengthen our NCs and our next actions in the international arena, such as the next meeting and the next international action.

The meeting takes place at the BASOA – Women Defenders House in Artea Village, a network project formed by human rights activists who support migrants passing through the Basque Country to reach France, or in situations of exclusion due to their migrant status. It is a self-managed space in which some NGOs from the Basque Country participate, as well as those living in the surrounding area. Today they support about 700 people in the region.

Challenges and initiatives from the Basque NCB

It is also important to share the context of the WMW platform in the Basque Country which is made up of autonomous feminist collectives from the villages and gender setters of the Basque trade unions and some Basque NGOs working in the country. From a steering group made up of colleagues from trade unions, feminist collectives, and the left. This group promotes the actions of the WMW in the NC. The last assembly was on Saturday, October 22 to discuss the most worrying issues and challenges for the NC as the impoverishment of living conditions, especially of migrants and women, as a result of the financial measures of the European Union.
Also, the cuts in public services in recent years, such as social security and health, which are the most affected areas; the government intends privatization instead of outsourcing; also the increase in fuel prices that directly impact the lives of individuals and families.

Faced with that some bets for the action of the Basque NC: to support is the mobilization of the Social Charter of the Basque Country on November 19, the idea of the mobilization is to ask for a minimum wage because the reduction of income in the working class is increasing, jobs are decreasing while the cost of living increases. Another concern of the NC is the application of Convention 189 of the World Labor Organization on standardized remuneration for care work, which was approved but not applied. Today, unions and organizations are demanding the implementation of this agreement. The main demand is the abolition of live-in housework (in cases where people live in the same place where they work) and care work. To think about how to develop a public and communitarian system of care. Situations are especially experienced by migrant women living in irregular situations.

The Basque NCB also wants to contribute to the platform “La Vida en el Centro” (Life in the center), and in the next period, they will organize a round table in which we will be able to count on the participation of WMW members from other regions to share how we are working on the issue of care in other parts of the world. This platform is working on a proposal for the State to take charge or guarantee a public and community care system.

This is also articulated with the concern for the regularization of migrants, from the movement “regularziaçao ya” which collects signatures for the Spanish Parliament to debate the regularization of 500,000 migrants, mostly women working in the care sector, who live in the Spanish State and work in the black economy, and who in their irregular condition do not have access to social rights.