WMW on Capire: Nature Is Not a Commodity: An Agenda of Feminist Struggles 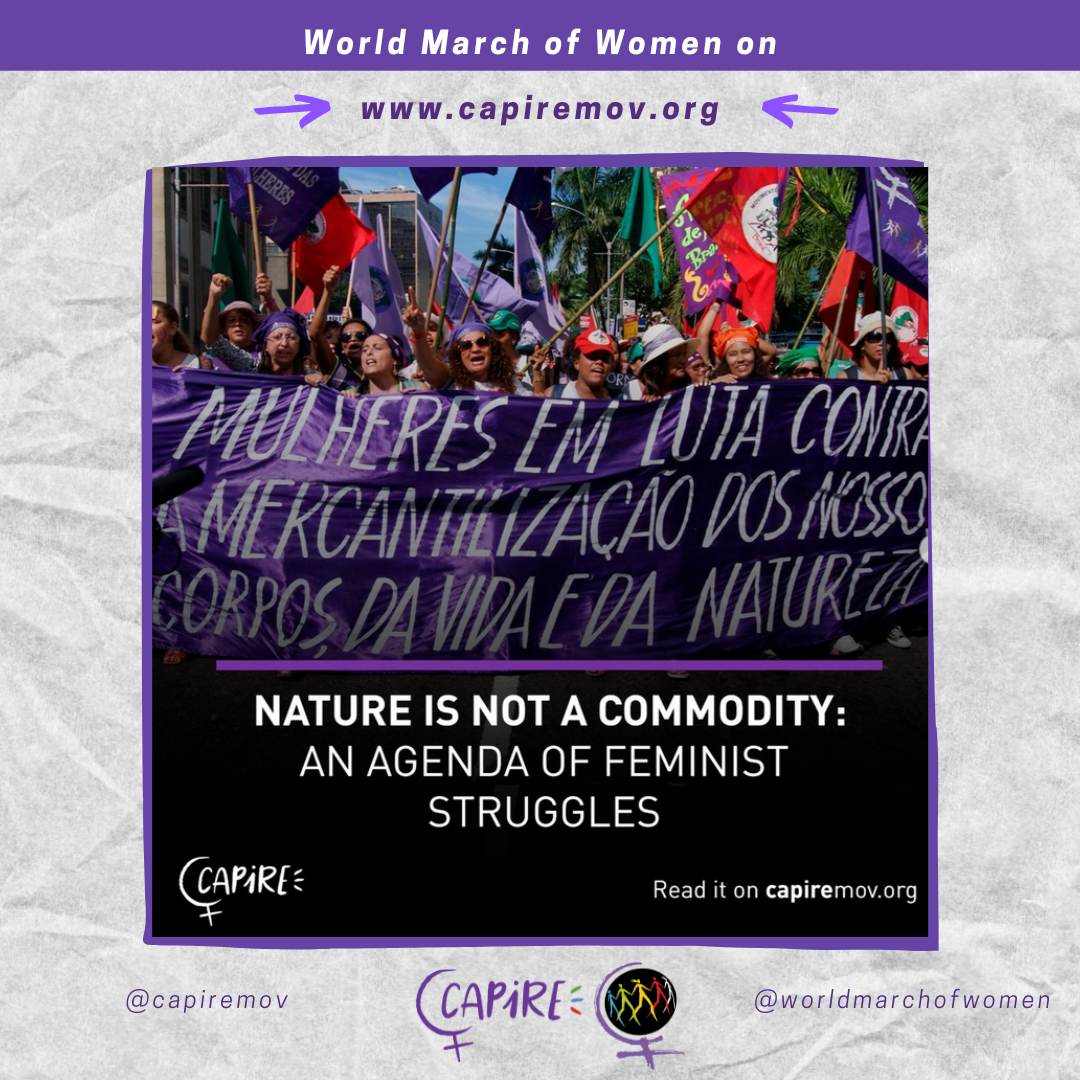 Article by Natália Lobo, of the World March of Women, criticizes the corporate strategies of financialization of nature

Around the world, we are facing a crisis of the capitalist model of development. Its environmental dimension has a huge destructive potential affecting the reproduction of life on earth, especially threatening women and populations living in more precarious conditions.

This model is based on megaprojects that destroy nature, including mining, agribusiness, illegal logging, and monoculture plantations for energy production (sugarcane, soy, and others), which threaten the people who live in exploited territories, in rural or urban areas. They mostly affect Black people and traditional communities and peoples, who feel the effects of destruction in their territories, as well as water and air pollution, and end up being displaced from their lands in dynamics we call environmental racism.

While the climate crisis is a pressing reality, it has been discussed as if it were the only environmental problem we are facing, to the detriment of others, including the biodiversity loss. This reductive perspective favors the introduction of simplistic responses to the problem, like the carbon markets, in which polluters pay to, in theory, compensate gas emissions from their operations that lead to global warming. This is what we call a false solution: not only these compensation mechanisms create other problems and increase social inequalities, but they also fail to address the main issue, which is the need for changes in modes of production, circulation, and consumption.

The “ballast” of carbon credits is in forests (which absorb carbon from the atmosphere and play the role of sinks), and to control these forests communities are kept under surveillance and displaced from their territories. Moreover, more and more realms of nature—land itself, for example—are seen as sinks that absorb carbon, which increases corporations’ race to these places, as they become essential to keep their business models working.

Claiming to solve the climate crisis, several megaprojects that destroy nature are set up, as is the case of mining projects to extract some ores and rare lands, which encroach areas around the world with the justification that panels and batteries must be produced to generate and store renewable energy.

The case of the energy industry really makes it clear how hypocritical corporate power is. As the European Union is struggling to get oil amid the war in Ukraine, companies expanded their oil and gas operations in northern Africa and the Middle East. Instead of investing in diversifying their energy sources and producing renewable energy—giving weight to energy transition—, they then chose to further explore non-renewable fossil fuels and boost colonialist relationships between European countries and countries in those regions.

This shows that companies’ decisions regarding which energy sources to invest in are first and foremost based on easy profit-making and on the boost to colonialism, rather than on environmental concerns. In the long term, it is possible to really have a “transition” in forms of production, as the depletion of resources is a reality that is getting closer and closer. However, if it continues to be spearheaded by corporate power, it will never be a just transition.

We are living in a time when there is both an expansion of fossil fuel exploration and the “brown economy” and an increase of “green” projects (of renewable energy, for example). Corporate power invests in both sides to supply the world’s growing energy demand and to make sure it will get its profits.

A brown economy can be described as a form of economic development that disregards its impacts on the environment and is based on the relentless extraction of resources from nature for its production processes. Mining, agribusiness, deforestation, and megaprojects that lead to huge environmental impacts are included in this kind of economy.

A green economy was created as an attempt, by corporations, to build their “green” side, as the critiques by social movements against the brown economy were growing stronger in society. In practice, a green economy does not challenge the foundations of the capitalist economy—which is really the core of the destruction of nature—and includes more elements in the circuit of commodities. Carbon, water cycles, and pollination, for example, are natural processes that are turned into commodities. After the creation of a “natural capital,” mechanisms were created for the circulation of this capital, including the carbon market.

At the discourse level, both big corporations and states claim to have environmental concerns. In practice, we see virtually no decisions regarding or enforcement of effective actions to mitigate climate change.

For example, during Stokcholm+50, a meeting held in June 2022 as part of the preparations for the Climate Summit (COP27), no relevant or effective decisions were really made: they did not talk about increasing the goals for rich countries to cut greenhouse gas emissions and they did not decide on anything regarding the responsibility of richer countries to contribute to a fund to fight and mitigate climate disasters in countries in the South. Adding to that is the fact that, in the previous COP, the biggest “delegation” attending the conference was the oil and gas industry, with more representatives than any country. These facts symbolize how “official” decision-making spaces on the topic are mostly companies’ greenwashed and purplewashed summits and spaces to do business.

We call greenwashing the actions performed by companies to make them look sustainable in front of the public. Big companies whose operations have a huge environmental impact usually publish adverts or conduct campaigns about “environmental responsibility” claiming to be concerned about reducing their impact. But these actions actually have little to no positive environmental impact in face of the destruction caused by the same companies.

Meanwhile, purplewashing means actions conducted for publicity purposes, aiming to convey the idea that the company is engaged in gender justice. They include things from the promotion of professional training courses for women to using the image of women who hold positions of power in companies. In practice, these are initiatives that do not change women’s lives, as they are the social group most affected by the projects conducted by these very companies.

Corporations, Commodification, and Financialization of Nature

The gas concentration that leads to increasing temperatures on the globe has become much worse in recent years, regardless of the many world summits and agreements on climate change. We affirm that there will be no way out of the climate crisis as long as corporations continue to hold so much power. So far, companies and states have only introduced market-oriented responses to the climate issue, based on compensation mechanisms and nature pricing. These false solutions are based on the idea that people only value and take care of what they have to pay for.

We call commodificationof nature the process that turns parts of nature into commodities, such as land, water, and forests, which were up until a point treated as common goods. As for the financialization of nature, it is the process of turning parts of nature into assets that can be traded in the financial market, where earnings represent a continuous source of revenue for those who own those assets. The financialization of nature has been increasing in recent years, following the change in the logic of capitalism, which seeks rent—the generation of income that does not come from the production process, but from speculation in the financial market—as an important part of the capital accumulation process.

In practice, billionaires continue to produce what they want, buying licenses to pollute, and the problem keeps growing. On the other hand, those who have historically cared for nature—traditional communities and peoples, agroecological family farmers, people engaged in care in the reproduction of life in their communities—have always done so by struggling to keep it as a common good, outside the market, and not subjected to its logic.

Territory as Front and Center in the Environmental Conversation

Considering everything that has been mentioned above, addressing territories as front and center in the environmental and climate conversation is fundamental. First, because they are the places where the effects of so many destructive projects and compensation projects are actually felt.

In the World March of Women, we see that, while megaprojects, compensation initiatives, and digitalization advance across the world, this does not happen loosely: they become real by concretely advancing and exploiting lands and territories.

Second, it is important to bring territories to the conversation because it is where processes of struggle and formulation of concrete responses to corporate power are being designed. When women use their bodies to defend their territories, holding actions to challenge companies or refusing to work the land where their husbands are using pesticides, they challenge this model in their everyday lives. They are also the ones who continue to have a relationship with nature based on the common.

The common is an anti-capitalist political principle that refers both to a set of things that are managed on a common basis and the very practice of generating commonality. That is, it is simultaneously the goods that are shared between people and the very action of sharing these goods in that community. Many social movements against neoliberalism and globalization have adopted this principle, which is expressed in the statement: “No commons without a community!” From feminism, we assert collective practices of care toward people and nature as political struggles connected to the common.

In the World March of Women, we believe that the modes of production and consumption have to meet people’s real needs, not the market’s. In this sense, economic growth cannot be discussed as a value in itself, without asking the questions, “production for what, how, and for whom?” which is often followed by the additional question, “against whom?” We also address the importance of planning the scale (the size and conception of projects) and the centralization or decentralization of production, aspects that more often than not are closely connected to the impacts that this production has on people, their territories, and their ways of living.

We address sovereignty as a non-negotiable condition for the production of food, energy, and technology. When we talk about sovereignty, we are talking not only about national and regional sovereignty, but also about popular and peoples’ sovereignty, which materializes, for example, as the right to self-determination, to having land to grow our own food, to choose how and what to produce, and people’s rights regarding their data. Democracy is a fundamental and completely inexorable dimension of this sovereignty, and it can only be possible if people’s participation is front and center. Finally, we believe that building true solutions for the environmental crisis will only be possible with less corporate power and more power to the public and community spheres.