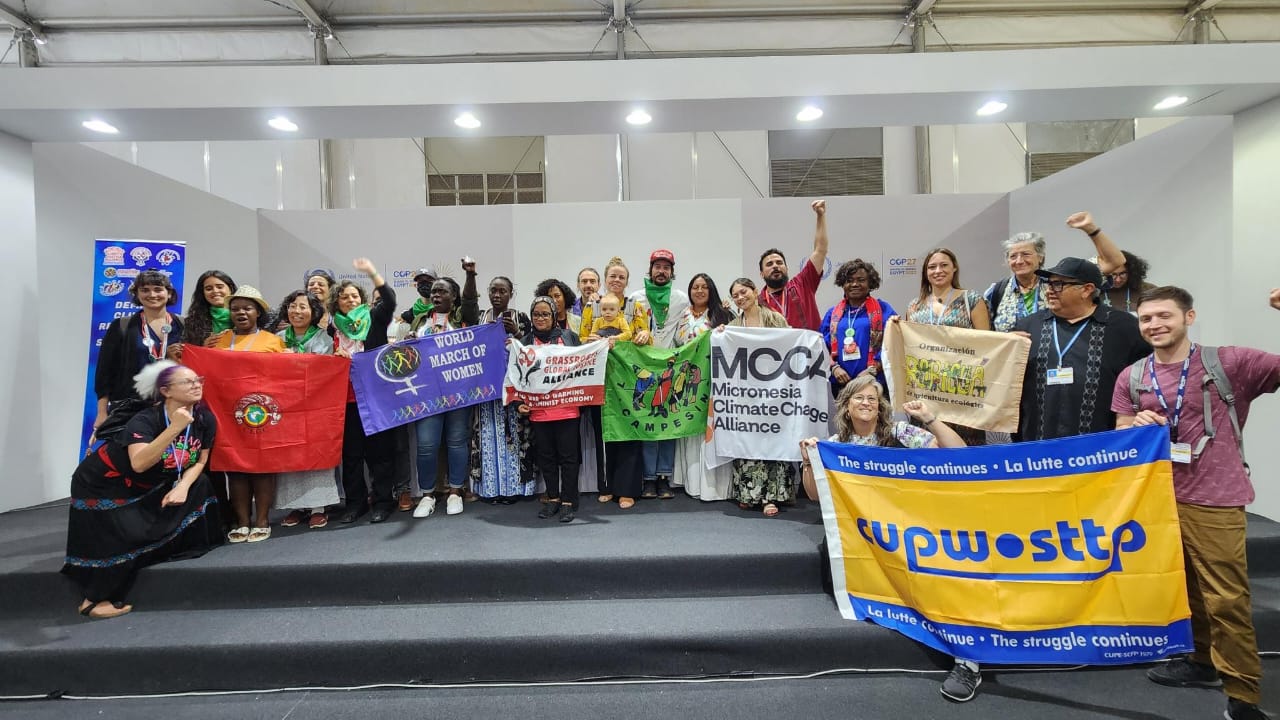 (*this text can still be updated with more information)

The United Nations Climate Change Conference – COP 27 took place from November 6 to 18, 2022, in Sharm El-Sheikh, Egypt. By political decision and after the experience accumulated by the WMW in the struggles of women around the world for the commons, the WMW was not at the conference with official representation.

However, WMW comrades from all regions were present from the articulations in which we are involved in alliance, to guide our popular and anti-capitalist feminism that rejects the false solutions of the market for the systemic crisis in which we live and denounces the effects of the commodification of nature, bodies and territories.

As stated by the group Carta de Belém, organizations and social movements present at the conference in the letter entitled “Together for climate action: with whom and for what?”, the conference again shows no signs of fulfilling the expectations of the “implementation COP” and criticizes what they call “climate fair: the transformation of the space that would provide climate solutions into a business counter”. The problem is serious, the results of the conferences may decide the possibility of securing long-term human living conditions on earth, or expand the possibility of profits under the argument of decarbonization.”

“The first week of climate negotiations at the United Nations Climate Change Conference in Sharm El-Sheikh, Egypt, ended with no sign of meeting expectations for the “implementation COP”, as it has been dubbed. In view of this, the Belem Charter Group, together with civil society organizations and social movements, opens the second week of COP27 with the launch of the letter “Together for climate action: with whom and for what?”, where they criticize what they call the “climate fair”: the transformation into a business counter of the space that would provide climate solutions. The problem is serious, the results of the conferences can decide the possibility of ensuring long-term human life on earth, or expand the possibility of profits under the argument of decarbonization.”

We of the World March of Women signed the letter and it can be accessed in Portuguese, Spanish and English. Recently, on the Capire portal, we also published a text by Natalia Lobo, activist of MMM Brazil: Nature is not a commodity: an agenda of feminist struggles, a critique of corporate strategies for the financialization of nature.

Solange Kone, representative of the International Committee of the Africa region of the WMW and of the National Coordination of the WMW in Ivory Coast, shares some feelings about the debates she witnessed at the conference:

“I would say that the issue of climate change, as it is treated today, is not really a priority for world leaders, otherwise we know that those who decide for us in this world, the big decision makers, if there is political will, things will change very quickly. You get lost in the middle of so many trading banks, stocks of numerous entities. And there were also spaces in which social movements and civil society tried to put forward their proposals and complaints about the climate crisis. Another issue that we cannot fail to take into account is the place where we are.  Egypt lives under a dictatorial regime and in the midst of geopolitical and economic disputes.

In one of the human rights roundtables, an Egyptian activist gave a testimony of what rights are in Egypt, and we were concerned about our safety. We did some symbolic actions to express our outrage at the authoritarian abuses of the regime. The police were there, so the atmosphere was also very tense. Another issue that is impossible not to notice is how they see these spaces of climate market negotiation the territories in Africa, for example. One of the days I was at a booth in the Democratic Republic of Congo, where the Congo River Basin is located, a very important basin for the African continent and one that attracts a lot of attention because of its natural resources.

I found it interesting to see so many people circulating there, official representatives, people economically interested in the defense of the basin, at the same time that we, the African countries, continue to suffer the impacts of covid-19 on the issue of vaccines, where are the vaccines for Africa? Therefore, I also stress the importance of seeing the mobilizations of young people in the activities, resistance movements exist and are fighting, we must fight together.”

Read the complete text of our WMW Positioning: No CLIMATE JUSTICE without FEMINISM

The World March of Women fights for real change: Our plan is based on strengthening the ties between women, and awareness-raising of the concerns shared by all women, particularly locally, in the fight for changes in consumer patterns and the capitalist system’s production model. Our challenge entails uniting women’s struggles, both rural and urban, against environmental inequality, in order to safeguard public services and common goods, protect nature, and fight the privatization of our lives, among others.

Fights for food sovereignty, agro-ecological resistance (traditionally led by women), the feminist politicization of the right to control one own body, the construction of women’s autonomy, and the central importance of caring for life and nature all combine to produce political convergences capable of building a new paradigm of sustainable life, based on equality and concern for future generations. That’s why, as feminists, we are saying that; There can be no Climate Justice without Feminism.