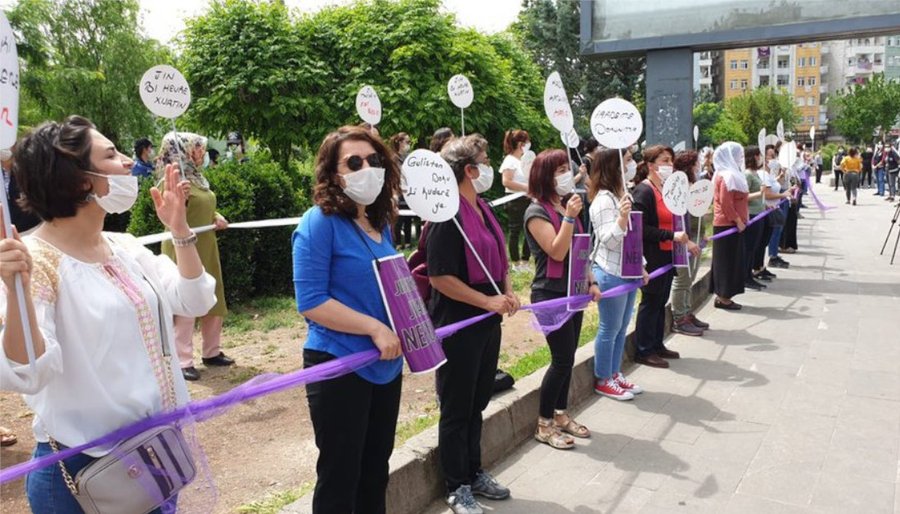 The capitalist system which thrives on ecological destruction and exploitation is striving to turn the Covid-19 pandemic process into an opportunity to extricate itself out of its multi-faceted down flow all over the world. As women of the MENA region, while working hard to come up with ways of protecting ourselves and our societies against this pandemic, we are also waging struggles against war, problems of displacement and immigration and violence against women on the one hand and building solidarity that transcend borders on the other to consolidate our struggles.

In Turkey, the fascist AKP-MHP [electoral alliance in Turkey, established in February 2018 between the ruling Justice and Development Party (AKP) and the opposition Nationalist Movement Party (MHP)] government is using the pandemic as an opportunity to strengthen its weakened hold on power. Using the excuse of pandemic it has went on to confiscate all the rights of the society in order to cover up the deficiency of its health policies and the economy in ruins; its choking the country with its policies of isolation. The monist male dominant mindset has carried the political and military operations of genocide against the Kurds, the women and democratic forces to the highest level while escalating policies of political, social and economic violence.

The fascist AKP-MHP government has adopted a mode of governing built on repressing any objection with threats of detention and arrest, and on the intimidation of opposing individuals and institutions which bring up and struggle to solve the country’s many problems like rights, justice, economy that grow more severe with each passing day. Through policies of war they did not suspend even in times of the pandemic, they tried to devastate the Kurdistan geography; they appointed trustees to municipalities and revoked the deputyship of members of parliament in a move to confiscate people’s will power in its entirety.

This system based on a strictly monist, male dominant mindset has made a primary target of women who have displayed the willpower to resist and struggle against all manifestations of its barbaric policies; it has brutally attacked all the institutions, associations and specific fields created by women. Associations and centers engaged in struggle to confront, build self-defense and take steps towards eliminating violence against women are being closed and women activists are being sent to prison in the hundreds.

Upon the declaration of State of Emergency in Turkey in 2016, tens of women’s institutions and women solidarity centers were closed by the regime. After three hard years, Rosa Women’s Association with a focus on women’s rights and fighting violence against women was opened in Amed (Diyarbakır) last year to provide a breathing space for women. The activists and executives of Rosa Women’s Association and Tevgera Jinên Azad (TJA) were detained and arrested in midnight house raids last month. 18 women – including TJA member and World March of Women delegate Gülcihan Şimşek were arrested. On 26 June, Democratic Society Congress delegates were arrested; many of them were women. Among them were Peace Mothers Makbule Erbey and Havva Kıran, both in the pandemic risk group – in their 70s. The police raided the home of TJA activist Rojbin Çetinand subjected her to sexual and physical violence and torture for three and a half hours in her own house, making police dogs attack her. This torture was documented by her lawyers with photos and made public.

During the pandemic in Turkey, there have been increases of 80% in physical violence, 93% in psychological violence, 78% in the demand for shelter. In spite of this, men who committed sexual crimes and domestic violence are being released and sent back home to commit new crimes based on a so-called pandemic amnesty that includes all but political prisoners and murderers.

Turkey is one of the first signatories of the Istanbul Convention, and yet the Istanbul Convention is now under attack from the government itself. The vice president of AKP has openly made the statement “Signing this convention was a mistake. We can and we will revoke our signature just as we put it.” This discourse, this hostile attitude towards women by those in seats of political authority is serving as an open invitation encouraging crimes against women.

The government is taking advantage of the pandemic to make a new attempt to lower the age of marriage to 13 and to pass a law to marry girl-children with the men who sexually abused them. Big crowds of women rising up in protest had forced them to revoke their proposals to this effect twice before.

The burden of the economic impact of the pandemic has been put on women’s shoulders. The policy of continuing production without any break at all costs for the sake of “economic stability” which one should read as for the sake of capitalist market and profit, has resulted in the operation of unlicensed and illicit manufacturing places without any measures against the pandemic. Women regarded as cheap labor make up a major part of the workforce in these places and they were forced to work under the worst conditions with no social or physical security. In other places, women were forced to go on unpaid leave and confronted with the threat of dismissal. In consideration of the uncertainty of how long the pandemic will last, it is evident that these problems will get more vitriolic for women. Moreover, global reports indicate a rise in violence against women with the lock up in houses.

As TJA activists we continue to step up women’s struggle through resistance against the fascist system in the midst of attacks against women systematically concocted in the darkest and most reactionary fashion.

Through our campaign “Stand up for Change and Transformation” we engaged in multi-dimensional struggle against patriarchal family, patriarchal society and patriarchal state. With our campaign “Women’s Struggle is Everywhere” we are aiming to highlight and intensify women’s organized struggle in political, social, cultural, ecological, health, education, law, local government fields against the state’s sexist, racist, militaristic and religion-exploiting policies.

Against the state appointed trustees in our municipalities, we launched our “Co-Chair System is our Purple Line” campaign and made it our priority to reach thousands of women and to organize to confront the state’s attacks on women’s right to elect and be elected, and to continue to strive to build a democratic, equititarian system based on women’s perspective.

Our campaign ‘Women Massacre is political’ , “Where is Gülistan Doku” concerning the disappearance of Gülistan Doku in Dersim since 5 January 2020 has turned into a countrywide campaign. The campaign “Child Abuse Cannot Be Pardoned” that was launched 6 months ago is continuing as a part of our struggle in the field of children’s rights.

We are also part of the joint international women’s campaign involving the women of the MENA region and the world,“Solidarity Makes Us Survive” which aims at the liberation of all political prisoners and especially women political prisoners.

We carry out much of our work and activities in cooperation with women from the regions of Kurdistan and Turkey. Until now in these campaigns marches and declarations were made in 68 cities and 45 counties in Turkey and in North Kurdistan. We have increased our engagement in social media work in this period through panel discussions, workshops, webinars and hashtag activities.