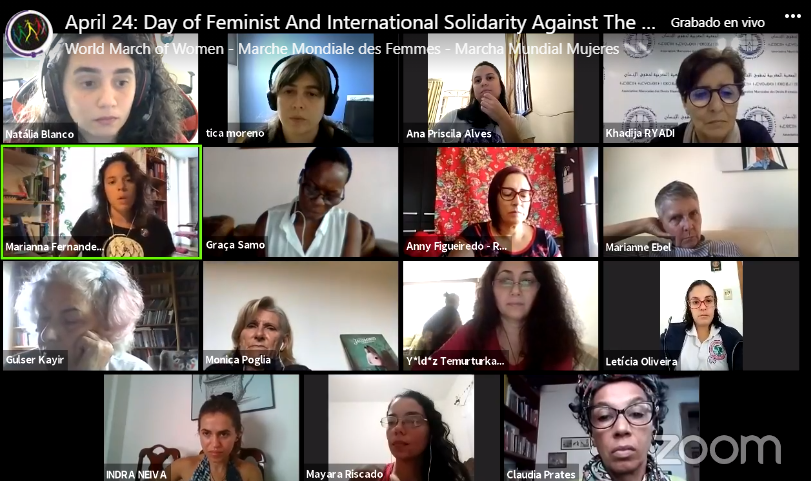 On April 24, the World March of Women organized once more the International Day of Feminist Solidarity Against Transnational Corporations. The date honors the more than one thousand women and men workers in the textile industry who lost their lives in the collapse of the Rana Plaza building in Bangladesh in 2013. The WMW contributed to the agenda of feminist fights against capitalism and racism with an international webinar and local actions in several countries to confront the power of the big corporations, precarious work and the threats posed by capitalism to life, women’s bodies and nature.

WMW’s this year’s declaration updates this international agenda considering the context of the second year of pandemic. The COVID-19 vaccine race in the market has costed us many lives around the world. In addition to the claim for justice in Bangladesh, the declaration emphasizes the cases of Morocco, in which more than 20 workers died electrocuted in a clandestine plant, and of Cabo Delgado, Mozambique, where women face armed conflicts, violence and extractivism.

Women connected all over the world

The lectures given by Ana Priscila Alves (WMW Brazil), Marianna Fernandes (WMW Switzerland and International Committee) and Nzira de Deus (WMW Mozambique and Women’s Forum), mediated by Khadija Ryadi (WMW Morocco), contributed to the discussion on the resistance in those regions, in defense of the territories, the common good and the right to health, in the international webinar with more than 100 participants from at least 30 countries and territories.

The intervention by Marianna Fernandes, from the coordination of WMW Europe and of the International Committee, began with the emphasis on the April 24 movement’s origins as the International Day of Feminist Solidarity Against Transnational Corporations. The movement denounces the conflict between profit and life, and recalls the actual impact of big corporations on women’s lives. She also recalled that, for the working class, for the black, migrant and poor communities, the precarious insertion in the production chains is the only option they have in order to survive. She emphasized that the transnational corporations control several sectors, such as clothing, agribusiness, mining, digital technologies and banks, fueled by exploitation and domination.

Marianna also asserted that the vicious dynamics of neoliberalism result in the appropriation of the social movements’ agendas, draining their revolutionary content, just selling an image of diversity and inclusion. She gave examples as the fake solutions of green capitalism and its environmental conservation initiatives that rob and expel peoples from their lands; the “pink makeup” that associates feminism and empowerment with the “girl power” consumption; the pharmaceutical industry that has profited from and controlled the responses to the pandemic and the right to the vaccine.

‘We want to have access to land to ensure food sovereignty to our communities and peoples and also to promote a truly sustainable relation with nature. And we have the answer of how to do this. It is through agroecology. It is through the agrarian reform. (…) We want to fully change how the work relations are organized, putting care and sustainability of life in the center of this organization. We want to work in an organized economic system based on solidarity, feminism and anti-racism.’

Ana Priscila emphasized the role of the corporate power in intensifying the authoritarianism of capital. Even the pandemic is a source of profit for transnational sectors: ‘Thousands of people have died over the last year worldwide. Three million is the number of lives lost until now. Meanwhile, the big transnational corporations are profiting as never before, such as Amazon’.

The Brazilian militant denounced the imperialism and the deadly neoliberal politics that build up the economic inequality between North and South. The result of this is the unequal distribution of vaccines based on money instead of need and much less on cooperation. ‘10 countries concentrate 80% of the vaccines, while 130 countries still haven’t had the possibility of beginning vaccination’.

‘By breaking down all such intellectual property, we begin to discover an entire history of exploitation, expropriation and appropriation of the traditional peoples’ knowledge, of nature, of our people and of what is common to all. This is why the fight to end patents has always been part of the movements for health and has become central to our agenda during the pandemic’, Ana Priscila explains. The feminist and popular response is claiming for the end of patents, for solidarity and cooperation; providing support to the alternatives offered by the peoples, such as the Cuban vaccines, and fighting to overthrow the neoliberal and authoritarian governments that promote death, such as the one of Bolsonaro in Brazil.

Nzira de Deus, a sister of the World March of Women of Mozambique, shared with us an urgent and violent situation faced by the population of Cabo Delgado Province. Over the last years, the region has been the target of disputes between big corporations seeking oil, natural gas and precious stones, supported by the government, which omits information and makes deals that directly affect the people’s lives. And on top of that, the government promotes the military conflict using the anti-terrorist discourse. The population that rely on traditional agriculture and fishing are the ones who suffer the most. Women are the main responsible for the traditional food production. Many communities organize around the production in their machambas (lands).

‘Such lands which have been stolen under unfair agreements; communities, stores, schools, streets have been destroyed by the militarized violence. In view of the government’s omission, the number of people who left their houses and their lives behind has reached 1 million. Journalists who try to denounce what is really happening are being subject to threats; women and children are being used as objects of dispute, being raped, and many children are disappeared. None of this information is disclosed. We see on television only the news about terrorist attacks; nobody talks about the true origin of the conflict, which are the actions of these big companies. And there is a propaganda to fight against terrorism, encouraging the armed conflict through the enlistment of the young. Women of the World March are united in solidarity with the population of Cabo Delgado to denounce it on an international basis and push the government to act and confront the injustice and barbarism provoked by the elites of the country and by the transnational corporations’. Mozambique sisters call the women all over the world to mobilize in solidarity and for peace.

See below the actions organized by women around the world:

The World March of Women Portugal organized the webinar ‘Women’s Resistance and Fights in Armed Conflicts Against the Transnational Corporations’, counting on the participation of Embark Hamoud, from the Network of African Women in Conflict Prevention and Mediation (FemWise-Africa), Laura Winasse, from WMW Mozambique, and Maren Mantovani, international relations coordinator of the Palestinian campaign ‘Stop the Wall’. They talked about the Moroccan occupation of Western Sahara, about the increasingly worse armed attacks in the region of Cabo Delgado, in Mozambique, and about the Israelite apartheid in Palestine, as well as forms of global solidarity.

In Belgium, the World March of Women organized a webinar called ‘Feminist Solidarity Against the Power of Transnational Companies’. The event was held on Friday afternoon, April 23 and further discussed matters that affect women workers’ life conditions all over the world.

Connecting their resistance fights and feminist anti-capitalist and anti-patriarchal proposals from several territories, the women of the World March of Women in the Macro-north region of Peru organized the webinar ‘International Day of the Feminist Solidarity Against Profit Over Life’. The online event happened on the afternoon of April 24 with lectures given by sisters Maria Janeth Alama, from Tambogrande District Women’s Association, Aurora Portal, from Santa Elena de Cajamarca Urban Patrols, Luz Musayon, from Lambayeque Users’ Committee, Martha Flores, from South America Jubilee Network of Nicaragua, Erwin Salazar, from Peruvian Workers’ Central, and Rosa Riverto, from the World March of Women of the Macro-north region of Peru. Lourdes Contreras was responsible for the moderation.

‘In Peru, we haven’t put an end to slavery. It is behind the human traffic and the work performed by thousands of women in the trading companies, in the textile industry and in other sectors. The purpose of our fights is to put life at the center of everything, and we demand an amendment to the Political Constitution of Peru through an ecological and sovereign Popular Constituent Assembly formed by peers and not restricted to only one nationality’, the Peruvian women declare.

Chilean women united their voices to denounce the plunder practiced by the transnational corporations, the transformation of health in a commodity and the colonial system that violates women’s bodies and territories. The World March of Women Chile prepared a declaration entitled ‘Free Seeds and Water – Feminist Resistance to Extractivism’. ‘Our feminist and anti-capitalist resistance to corporate power resides in our collective confronts formed by different realities, peoples and places to prevent the advancement of the transnational corporations’ actions’. You may read the declaration here.

Feminists from Brazil promoted solidarity actions and protests against president Bolsonaro around the country. In Rio Grande do Norte, the WMW promoted solidarity actions such as food donations, as well as in Rio Grande do Sul, where these actions were part of the Grassroots Feminism alliance, in partnership with Friends of the Earth and other movements. In Santa Catarina, there was an action in the streets claiming for vaccines for everybody; in Manaus, women raised banners and posters protesting against the genocide orchestrated by Bolsonaro against the Brazilian population.

In Cuba, women organized around a virtual program to debate and put the issue of care at the center of the political debate in a day of feminist actions. This session was moderated by Llanisca Lugo, a popular educator from the Martin Luther King Memorial Center, with panelists Herminia Rodríguez Pacheco, journalist and specialist in the Ministry of Higher Education; Magela Romero, sociologist and researcher at the Department of Sociology of the University of Havana; and Maura Febles, sociologist and member of the GALFISA group at the University of Havana. Sociologist and member of the GALFISA group of the Institute of Philosophy.

In the United States, women who work in several feminist and popular organizations held the online event ‘Fighting Global Austerity to Thriving’, on April 26. The event organized by the Grassroots Global Justice Alliance, which is the WMW organization in the US, together with other feminist and popular organizations, was a celebration of women’s resistance in the US and all over the world who fight against austerity and in favor of an expansion of economic rights during the pandemic.

The women from the Middle East and North Africa (MENA) organized a webinar in memory of the victims of the collapse of the Rana Plaza building. The online event counted on lectures given in Arabic by sisters from Palestine, Iraq, Tunisia, Morocco and Kurdistan.

In the Philippines, the women of the World March demonstrated their solidarity with the women workers of the world through a video published in their social media. ‘The past tragedies may happen again if the main purpose of the companies is just to make more profit instead of guaranteeing their workers’ safety and well-being’, declared Jane Labongray, member of the Center of United and Progressive Workers [Sentro ng mga Nagkakaisa at Progresibong Manggagawa – SENTRO].

An excerpt of the video was published on Capire. On the 26th, the video ‘Feminist Struggle Against Transnational Corporations and the Precarious Labor’ brought together, in addition to Jane’s intervention, lectures by Khadija Ryadi, from Morocco, and by Judy Miranda. The website also disclosed an animated series called ‘Feminist Criticism of Corporate Power’. The videos show how corporate power works in three industries and also present our alternative feminist proposals. Watch the videos here.